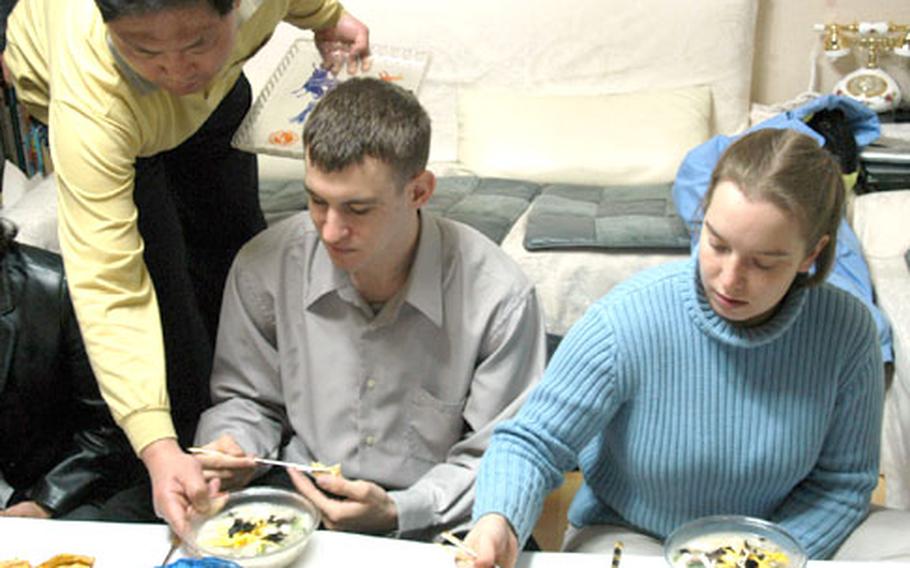 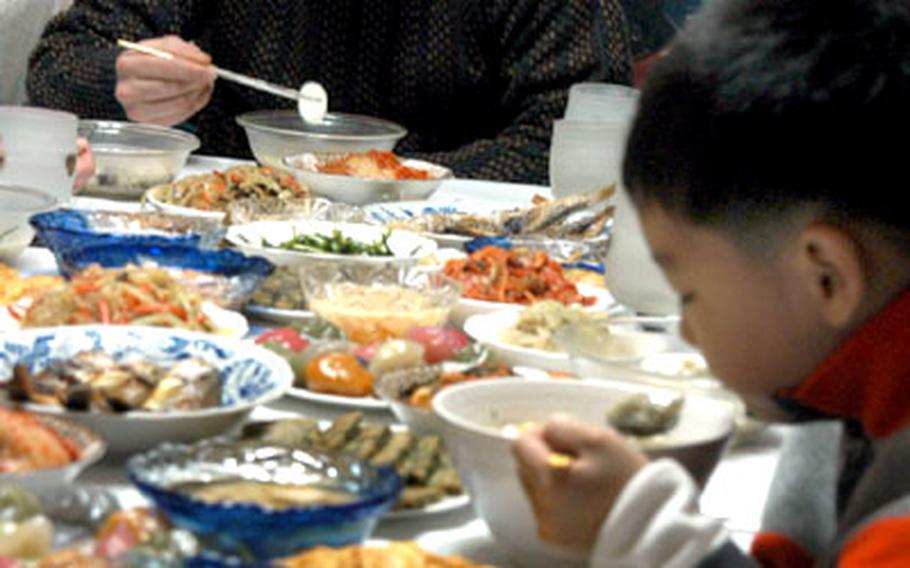 Sgt. Chris Ryanczak gets ready to eat a rice cake from a bowl of soup filled with dumplings, egg and seaweed, a traditional Korean dish. In the foreground is Shin Won-suk, 8. (Teri Weaver / S&S)

SEOUL &#8212; Shin Hang-kyun looked around his living room Wednesday morning and decided that this year&#8217;s Lunar New Year celebration would prove his luckiest yet.

The soldiers went to the Shin apartment in Seoul&#8217;s Mapo neighborhood to learn about Lunar New Year, the day Koreans honor their family and enjoy their culinary skills. Luck factors into both areas, as the families first feast on foods meant to bring prosperity, then offer tea and food to their ancestors in a bowing ceremony.

The visit was part of U.S. Forces Korea&#8217;s Good Neighbor Program, an effort by USFK commander Gen. Leon LaPorte to foster better relations between Americans serving on the peninsula and South Koreans. The Good Neighbor office worked with the Gangnam District government office to arrange the trip, which also included a stop at the Insadong shopping district and Duksu Palace, said Maj. Iris Cowher, who runs the program.

The group first had breakfast at the home of Shin&#8217;s brother, Shin Ho-gyun, in northern Seoul. Ho-gyun&#8217;s wife, Min Kyung-sook, had stayed up all night to prepare the meal: 35 dishes filled with fried cakes, rice dumplings, kimchis and fruit cocktails.

Sgt. Samantha Astor, 23, of Pennsylvania, a flutist with the 8th Army band who has been in South Korea for about two months, struggled a little with the slippery metal chopsticks but said she thoroughly enjoyed her first bowl of dumpling soup. Cowher politely asked for water after sampling one of the spicy kimchi, or pickled cabbage, dishes, but continued to eat that and the pickled seaweed next to it.

Then the group made the trip to Mapo and the elder Shin brother&#8217;s home. There, the family lit incense and offered fruits, desserts and fried cakes to their ancestors.

&#8220;So am I a genius if I use them with both hands?&#8221; he asked, and after a delay of translation, the Shin family chuckled. Then the family presented the group with another meal, generous samplings from the offerings made to the ancestors.

By 11 a.m., the soldiers had eaten two meals and learned, at least by Korean tradition, they should consider themselves one year older.