Korean family grateful to teen for saving their drowning child 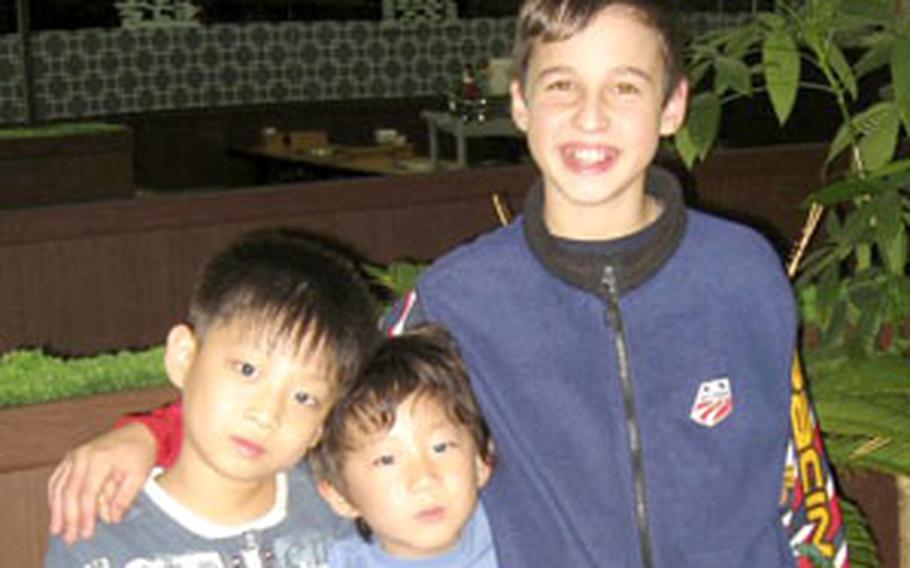 Adam Budge, 13, poses with Park Jung-hoon (center), who lay lifeless at the bottom of a swimming hole near Osan Air Base in August until Budge retrieved him after a series of dives. (Courtesy of Richard Budge)

Adam Budge, 13, poses with Park Jung-hoon (center), who lay lifeless at the bottom of a swimming hole near Osan Air Base in August until Budge retrieved him after a series of dives. (Courtesy of Richard Budge) 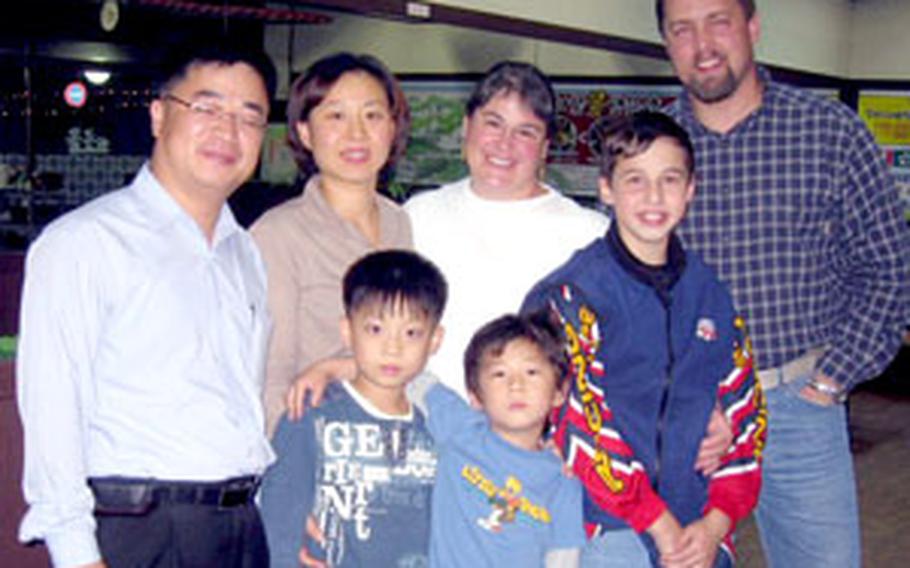 Adam Budge, 13, second from right, stands with him parents, Park Jung-hoon and Park’s family at a restaurant in Osan City last week. Behind Budge are his parents Heather and Richard. Park Jung-hoon is at center with his arm around his elder brother. His parents are at left. (Courtesy of Richard Budge)

PYEONGTAEK, South Korea &#8212; One sunny day in August, Heather Budge dropped off her 13-year-old son, Adam, and a friend for an afternoon of fishing in the Jinwee River, about five minutes away from Osan Air Base.

Later, she drove back to get them and watched as a Korean man who&#8217;d been fishing broke suddenly from his spot and made a dash toward a nearby swimming hole.

Budge, 39, whose husband is a civilian contractor at Osan Air Base, saw three Korean boys struggling in the water. She later learned the boys were the fisherman&#8217;s two sons and their cousin.

She&#8217;s a big believer in swimming proficiency, she said, and has made sure that her four children can swim well.

The man got two boys to safety but one of his sons had disappeared under about seven to eight feet of water.

Over the next seven or so minutes, Adam, an eighth-grader at the International Christian School in Pyeongtaek, made 10 to 15 dives.

He found the boy and brought him up.

The father and another fisherman began trying to resuscitate the boy, but neither seemed familiar with how to do it.

The boy lay lifeless. An ambulance eventually arrived and took him away.

That night, a shaken Budge asked a friend from church, Jihyun Knudsen, to join her for a walk and mentioned she wished she could learn the boy&#8217;s condition and speak with his family.

But two or three weeks later, Knudsen called with astonishing news: The mother of the boy Adam Budge brought to the surface is a friend of a friend.

Knudsen&#8217;s friend said the boy, first-grader Park Jung-hoon, had been unconscious for two days but had pulled through.

Later, Knudsen called the boy&#8217;s mother and learned the family was eager to be in contact with Adam&#8217;s family.

Jung-hoon&#8217;s family had contacted a South Korean radio outlet, which spread word that they were hoping to find the American family. The boy&#8217;s family also had considered hanging a banner outside the base&#8217;s main gate, Knudsen said.

The two families met for the first time last Friday, when the boy&#8217;s family had the Budges to dinner at a restaurant in Osan city.