Buy Photo
A United Nations Command security escort briefs a visiting group of teenagers Wednesday at the Joint Security Area of the Demilitarized Zone of Korea. Tours appeared to go on as usual despite rising tensions between North Korea and South Korea. (Jon Rabiroff/Stars and Stripes)

Buy Photo
A United Nations Command security escort briefs a visiting group of teenagers Wednesday at the Joint Security Area of the Demilitarized Zone of Korea. Tours appeared to go on as usual despite rising tensions between North Korea and South Korea. (Jon Rabiroff/Stars and Stripes) Buy Photo
Visitors to the Dora Observatory at Korea&#39;s Demilitarized Zone use binoculars to look into North Korea on Wednesday. Tours to the DMZ continue apparently unaffected by rising tensions between North Korea and South Korea. (Jon Rabiroff/Stars and Stripes) 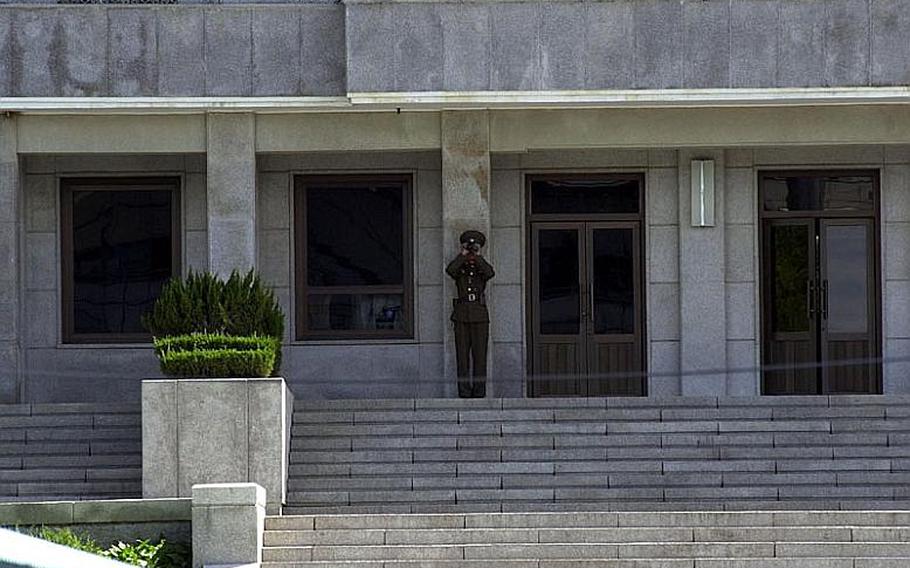 Buy Photo
A North Korean soldier uses binoculars to keep an eye on a visiting group of teenagers on the South Korea side of the Demilitarized Zone on Wednesday. Tourists are still allowed at the Joint Security Area of the DMZ despite rising tensions between the two Koreas. (Jon Rabiroff/Stars and Stripes)

DEMILITARIZED ZONE, Korea &mdash; Tensions between North Korea and South Korea are at one of the most strained levels since the Korean War, but you couldn&rsquo;t tell from what was happening in and around the DMZ on Wednesday.

At the Joint Security Area in Panmunjom, teenage girls giggled while a United Nations Command security escort briefed them about the history of the area and a North Korean soldier stoically looked on from across the Military Demarcation Line.

A few miles away, tourists by the busload took turns stepping up to the row of binoculars on the observation deck at the Dora Observatory to gaze across the border into North Korea.

And, down the hill from there, South Koreans employed at the Kaesong Industrial Complex lined up every hour as they always do for the three-mile drive into North Korea to go to work, despite the fact that the North on Tuesday banned entrance to eight government officials from the South who accompany them.

&ldquo;Everything is going along like normal,&rdquo; U.S. Forces Korea spokesman David Oten said, referring to the 20 DMZ crossings each day back and forth to the industrial complex, where 1,000 South Koreans work with 42,000 North Koreans at 120 South Korean-owned businesses.

That was the theme of the day despite worsening relations between the two Koreas sparked by the March 26 sinking of the South Korean warship Cheonan and the deaths of 46 sailors.

Last Thursday, an international panel of investigators made public its determination that a torpedo fired from a North Korean submarine ripped the 1,200-ton patrol ship in two, and on Monday, South Korean President Lee Myung-bak announced measures his country will take in retaliation.

Among other things, South Korea cut off trade with the North, will no longer allow North Korean ships to use its waters and will seek U.N. Security Council action against the rogue nation.

Lee said the Kaesong Industrial Complex would continue operating, leaving it as the lone remaining symbol of cooperation between the two Koreas. But its status is in doubt after the North threatened Wednesday to shut down the facility if it is further provoked.

None of that seemed to matter to the visitors and workers at the DMZ. Tours went on with no additional security measures.

The 150,000 tourists who visit Panmunjom every year from the south are accompanied by roughly a dozen soldiers who sport helmets and sunglasses.

Last year, an official there quipped: &ldquo;It&rsquo;s like coming to Disney World, but Mickey Mouse has got a gun.&rdquo;