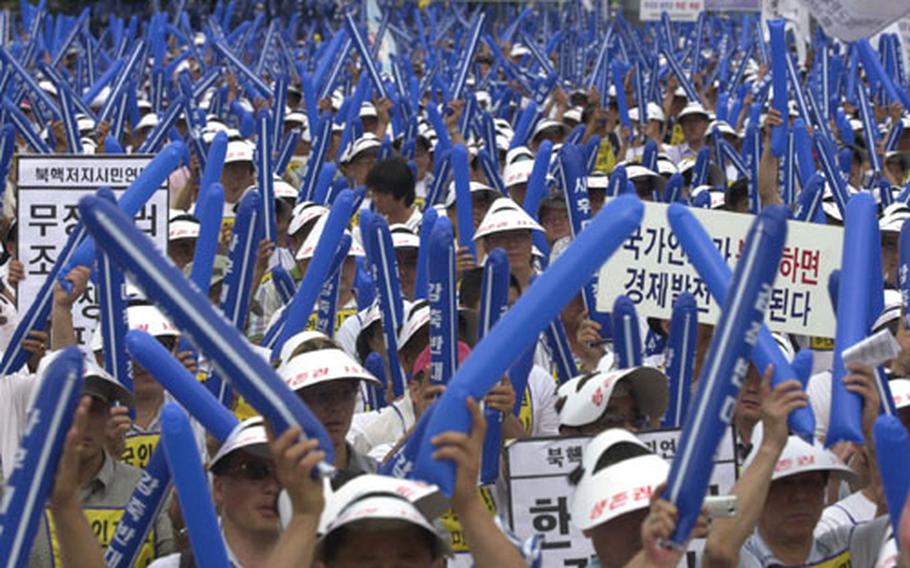 Thousands of Korean employees from U.S. bases throughout the peninsula rallied Thursday against possible job cuts. The workers say neither the U.S. nor South Korean governments have a plan for their livelihoods if widespread job cuts go into effect. (Joseph Giordono / S&S)

Thousands of Korean employees from U.S. bases throughout the peninsula rallied Thursday against possible job cuts. The workers say neither the U.S. nor South Korean governments have a plan for their livelihoods if widespread job cuts go into effect. (Joseph Giordono / S&S) 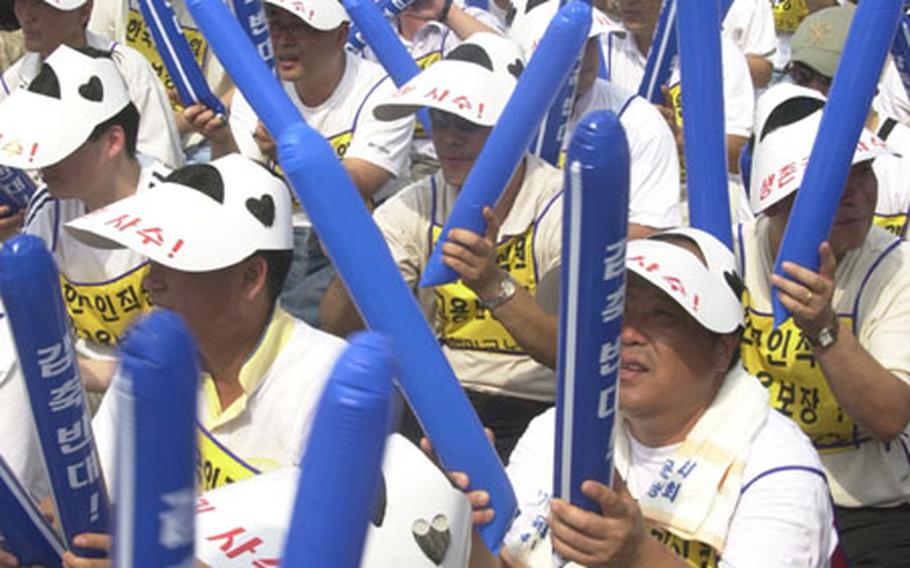 Thousands of base employees rallied Thursday in Seoul to voice their fears of possible job cuts. (Joseph Giordono / S&S) 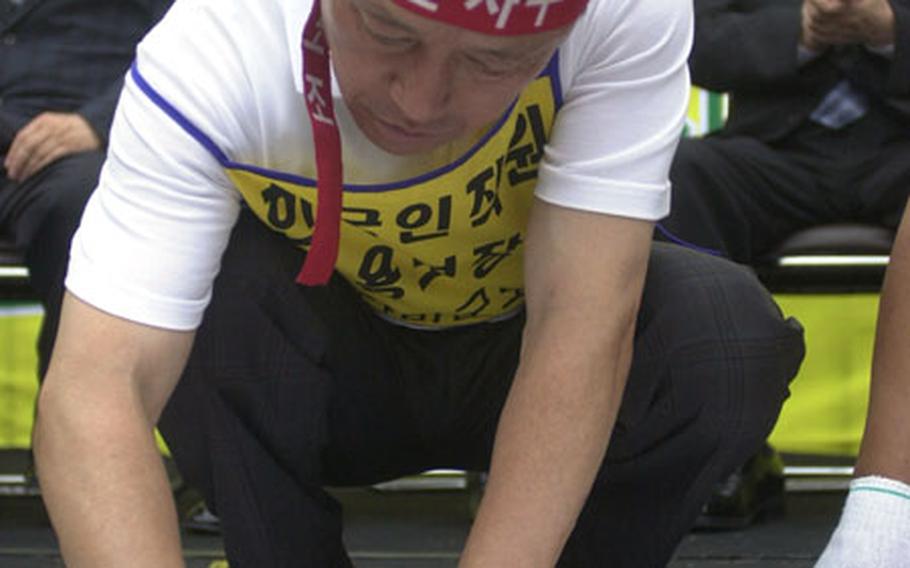 A Korean Employees Union leader uses his own blood to write "Defending peoples&#39; right to survive" during a rally Thursday near Yongsan Garrison. Thousands of base employees rallied to voice their fears of possible job cuts. (Joseph Giordono / S&S) 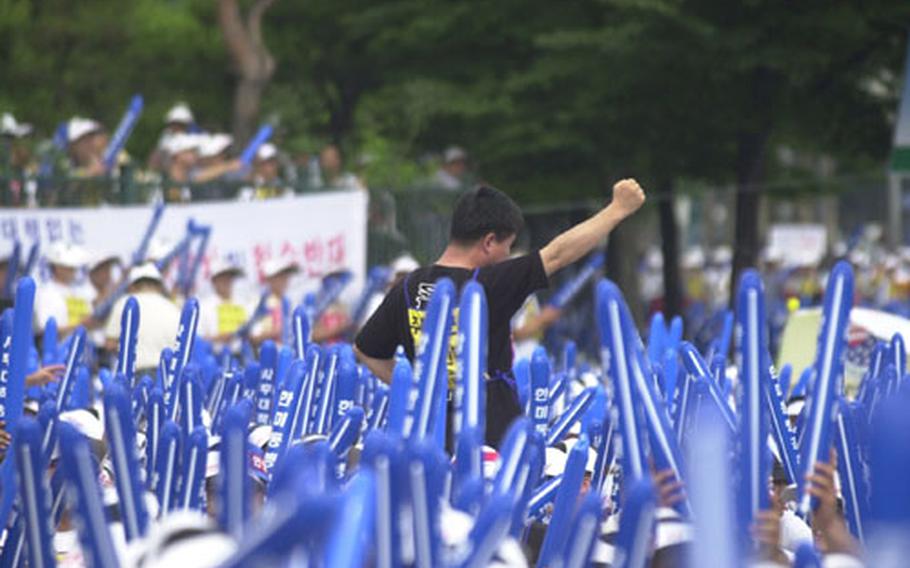 A unionized employee leads chants during a rally by thousands of Korean workers who fear job cuts at U.S. bases in South Korea. (Joseph Giordono / S&)

SEOUL &#8212; Thousands of Korean employees rallied against possible job cuts at American bases in South Korea, chanting and singing their fears Thursday that they could be left out in the cold by proposed U.S. base realignments or troop reductions on the peninsula.

Korean Employees Union members from as far as Pusan and Taegu &#8212; at the country&#8217;s southern tip &#8212; took part in the afternoon-long rally in front of the Korean War Memorial, just down the road from Yongsan Garrison.

Union leaders fear a cut of up to 40 percent of the estimated 18,000 base jobs held by Korean nationals if the reduction and realignment plans are finalized.

Under agreements reached in the past two years, the U.S. Army headquarters at Yongsan Garrison is to move out of Seoul by 2007; soon after, 2nd Infantry Division camps north of Seoul are to consolidate and move further south. And earlier this month, U.S. officials proposed removing 12,500 of the 38,000 U.S. troops on the peninsula.

Because neither relocation nor reduction plans have been finalized, U.S. military officials said Thursday, it&#8217;s too early to speculate about future job cuts.

&#8220;We do not know what the effects of future decisions will be on the workforce,&#8221; said 8th Army spokesman Lt. Col. Steve Boylan. &#8220;But 8th Army will work closely with the Korean Employees Union to provide information on any loss of jobs as far in advance to minimize any disruption.

According to military officials, the only job actions taken in recent weeks have been unrelated to the proposed troop reduction. Some 40 jobs held by Korean workers were eliminated as a reorganization of Morale, Welfare and Recreation and as part of a handover of responsibilities to the South Korean military in the Joint Security Area.

&#8220;We have been blessed with a dedicated, loyal, committed and competent workforce that has been a vital and integral part of our forces here in Korea,&#8221; Boylan said. &#8220;We deeply appreciate their many years of service and regret that we are unable to continue to provide employment opportunities for some workers.&#8221;

But many of the workers said they are upset with the South Korean government&#8217;s inability so far to come up with job training or adjustment plans for any future large-scale layoffs.

&#8220;They say our companies will be protected. But what about the people?&#8221; asked Kim Ki-tae, who works at Yongsan Garrison.

Under contract agreements, the U.S. military does not provide severance benefits to employees who lose their jobs. Many of those at the rallies demanded the South Korean government make the positions public servant jobs, ensuring them benefits.

The crowd Thursday stretched from the main entrance of the War Memorial up the street to the overpass linking the two sides of Yongsan Garrison. A sea of workers in white paper hats &#8212; adorned with pro-union slogans and small heart-shaped cutouts &#8212; sported yellow and red bibs with messages of protest.

At one point, several union leaders had their heads shaved as a symbolic protest; another union leader sliced open two of his fingers, then scrawled a sign reading &#8220;Defending peoples&#8217; right to survive&#8221; with his own blood.

The rally was largely peaceful until a few participants got overly zealous with protests against the militants in Iraq who beheaded a young South Korean businessman earlier this week. After one protester burned a poster with the image of the young man being held at gunpoint, several union leaders shoved the protester away from the rally, causing a brief melee in front of the crowd.

But the focus quickly returned to the job security issue, with speaker after speaker voicing support for the United States and its presence in South Korea but also condemning the possible moves.

&#8220;Not only is the American presence essential for our national security but also for our economy,&#8221; union boss Kang In-shik told the crowd.