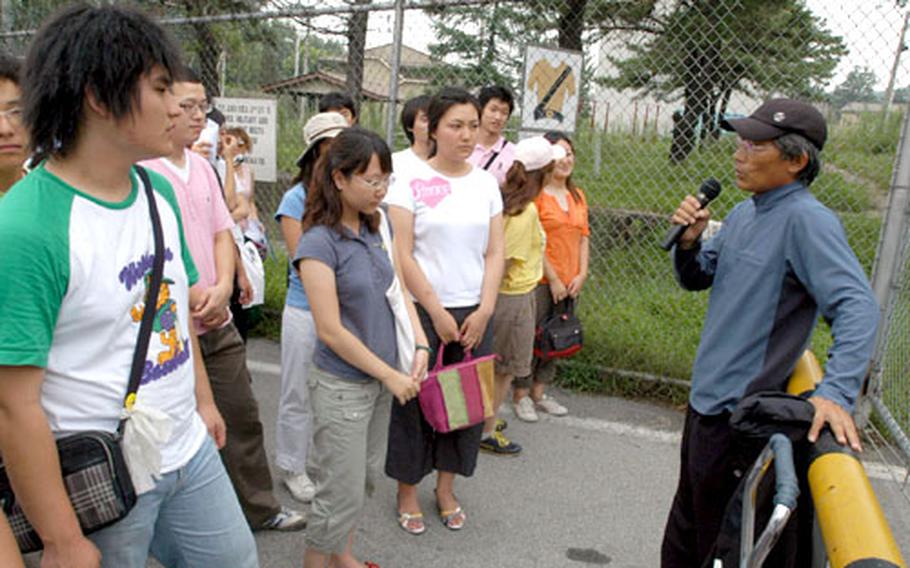 South Korean photographer Lee Yongnam addresses a group of protesters Tuesday at the main gate of Camp Stanton, near South Korea’s Demilitarized Zone. About 90 protesters rode by bus to several bases near the DMZ that the Army vacated in 2004. They said they wished to draw attention to U.S. military facilities’ economic impact on an area. (Seth Robson / S&S)

The Western Corridor bases targeted by the protesters were vacated by 2nd Infantry Division units last year and soon will be returned to the South Korean government. So when the protesters &#8212; mostly university students who were trailed by a few Korean National Police officers &#8212; arrived, they found only empty buildings, rusting barbed wire and uninterested South Korean security guards.

One of the first stops on the activists&#8217; itinerary was Camp Edwards, vacated by 2nd ID&#8217;s 82nd Engineer Company and the 168th Medical Company late last year. The base was empty and silent amid the sea of activity in the road outside, where a steady stream of cars, trucks and motorcycles passed by. The division&#8217;s Indianhead symbol still was visible on a rusting arch covering the entrance to the camp, near Paju City.

At their next stop, Camp Stanton, a few miles up the road from Paju, the protesters found another vacant facility. Here weeds were starting to cover an airfield where Kiowa Warrior helicopters operated by 4th Battalion, 7th Cavalry Regiment hovered until last November, when the unit moved to Camp Hovey.

The protesters gathered outside the front gate while an activist spoke harshly about the presence of U.S. soldiers in South Korean communities.

&#8220;The lowest form of American culture spreads out from the bases,&#8221; said Lee Yongnam, 50, claiming that the soldiers bring crime and prostitution.

The military has done much to address the problems around its installations, U.S. Force Korea spokesman David Oten said.

&#8220;We vigorously enforce the law, and place establishments off-limits if they participate in the activities mentioned (by Lee),&#8221; Oten said. &#8220;We take all allegations of crimes by Americans very seriously and cooperate fully with the Korean Police to bring those people to justice,&#8221; he said.

Lee said the group was aware that the bases they visited had been vacated, but they chose to stage the protests to highlight their effect on the local community. The presence of the bases puts building restrictions on surrounding areas, he said, stunting industry and growth. The economies in areas outside the installations were fueled by bars and other businesses geared toward soldiers, so the soldiers&#8217; departure had hurt the areas as much as their presence had, Lee said.

The protesters&#8217; next stop was at Camp Giant. Soldiers from 1st Battalion, 506th Infantry Regiment who were stationed there no longer have any impact on surrounding communities &#8212; they deployed to Iraq last August with 2nd ID&#8217;s 2nd Brigade Combat Team.