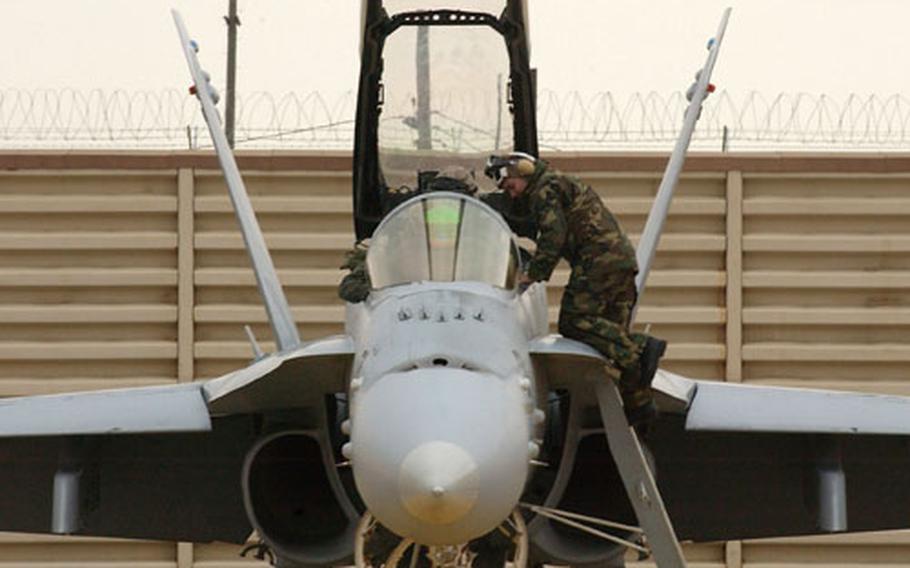 Marine Lance Cpl. Rinardo Rodriguez straps in the aircrew of an F-18D Hornet fighter before take off from Kunsan Air Base, South Korea, where a Marine fighter squadron from Iwakuni, Japan, is taking part in a two-week air-to-air combat exercise with an Air Force unit, the Kunsan-based 80th Fighter Squadron. (Courtesy of USAF)

Marine Lance Cpl. Rinardo Rodriguez straps in the aircrew of an F-18D Hornet fighter before take off from Kunsan Air Base, South Korea, where a Marine fighter squadron from Iwakuni, Japan, is taking part in a two-week air-to-air combat exercise with an Air Force unit, the Kunsan-based 80th Fighter Squadron. (Courtesy of USAF) 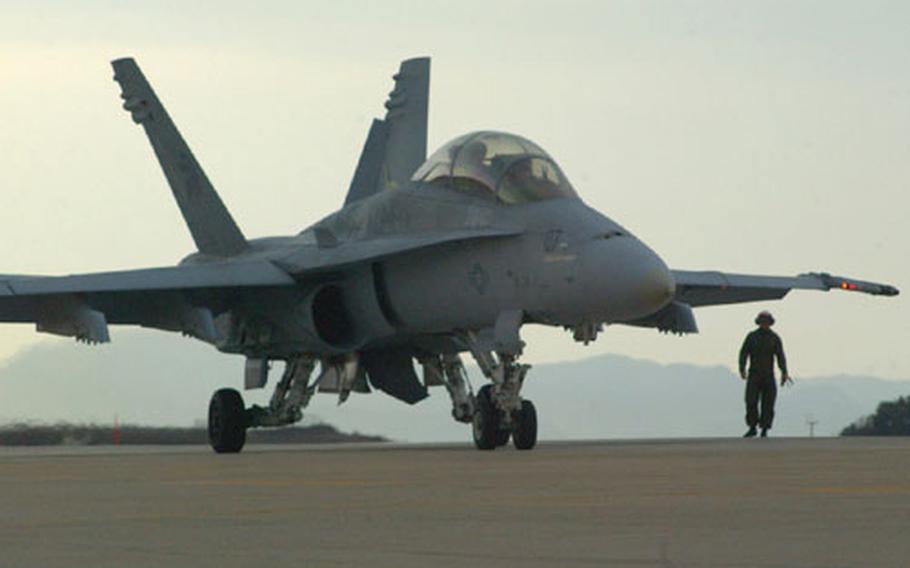 A U.S. Marine Corps F-18 Hornet from the VMFA-AW-225 Vikings Fighter Squadron, Iwakuni Marine Corps Air Station, Japan, waits at end of runway while a Marine maintainer performs final checks. The Vikings are at Kunsan Air Base participating in Hollandia, an annual exercise designed to familiarize pilots with dissimilar aircraft. (Courtesy of USAF)

OSAN AIR BASE, South Korea &#8212; Marine and Air Force fighter pilots are meeting in mock air combat over South Korea this week as part of an annual exercise to help hone their dogfighting skills.

Roaring over South Korea at 17,000 feet or more, the pilots try to get the drop on adversaries, then maneuver for a kill by simulated gunfire or missile shot. But since both aircraft types are closely matched, victory depends more on seeing and exploiting an opportunity, pilots said.

He recalled some of the cockpit dialogue from a dogfight Thursday morning.

&#8220;Tally two on the nose for two miles,&#8221; one Marine pilot told Wilson, the backseat flight officer, when he&#8217;d spotted two Air Force adversaries two miles straight ahead and about 5,000 feet below.

&#8220;Tally,&#8221; Wilson answered, letting the pilot know he, too, saw them. From there, the F-18 moved into position to attack, a scene typical of the many dogfights being played out during Hollandia, which began April 5 and runs through Friday.

By then, the pilots are to have practiced dogfighting in a variety of mock combats: one-on-one engagements between an F-16 and F-18, two-on-one, two-on-two, and four-on-four.

The Marine pilots have been making daily half-hour flights from Iwakuni to South Korea, where they rendezvous with a C-130 tanker and refuel, then fly to meet their F-16 adversaries. The squadron also has some 35 aircraft mechanics deployed to Kunsan Air Base.

&#8220;Most of our training &#8230; is against other F-16s,&#8221; said Lt. Col. Kevin Schneider, 80th Fighter Squadron commander. &#8220;This exercise &#8230; is an awesome opportunity to fight against somebody with different capabilities, different characteristics, maybe disadvantages, compared to ours, so it shows our pilots how to fight different aircraft.&#8221; It also gives them two solid weeks to focus on dogfighting skills, Schneider said. &#8220;We practice it on a daily basis, but we don&#8217;t focus on it for two weeks straight,&#8221; he said. In wartime, the pilots&#8217; mission would be to bomb and strafe ground targets, but enemy fighters jumping them always is a possibility. &#8220;We need to be able to fight our way into the target or fight our way out of the target,&#8221; Schneider said, &#8220;and deal with the air threat as appropriate.&#8221;

By the time that morning&#8217;s dogfights were over, both Juvats and Vikings had scored missile kills. Such training has big payoffs, said Capt. Clint Henderson, an F-16 pilot with the Juvats.

During a mock combat sortie on April 7, Henderson said, he and a fellow Juvat pilot got a vital reminder of the importance of keeping a good lookout from the cockpit.

They found themselves engaging an F-18 virtually without warning because the Marine aircraft&#8217;s radar wasn&#8217;t working.

&#8220;Since their radar was broken we didn&#8217;t have our standard keys alerting us,&#8221; said Henderson. Though they did spot the Viking, it was &#8220;a late visual pickup.&#8221; The Marine already was in position for a simulated missile shot; Henderson had to go into immediate evasive maneuvers.

Hollandia, Wilson said, &#8220;allows our aircrew to go out and basically fight the aircraft to the limits of what it&#8217;s capable of &#8230; in a scenario that is pretty much like what you would see in real combat."