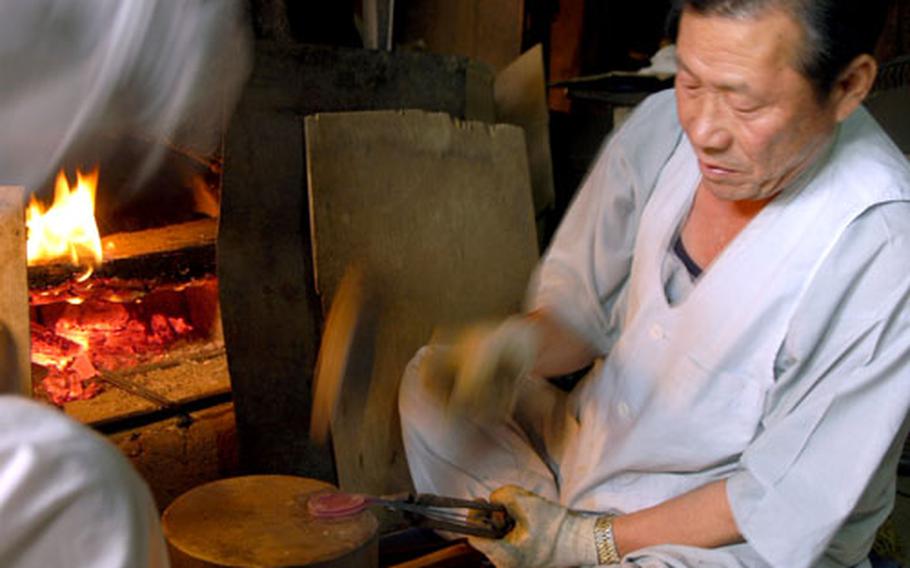 On “workshop street,” men use fire and mallets to shape metal into spoons. Other exhibits include silk-spinning, paper-making, embroidery and cooking. (Teri Weaver / S&S)

On “workshop street,” men use fire and mallets to shape metal into spoons. Other exhibits include silk-spinning, paper-making, embroidery and cooking. (Teri Weaver / S&S) 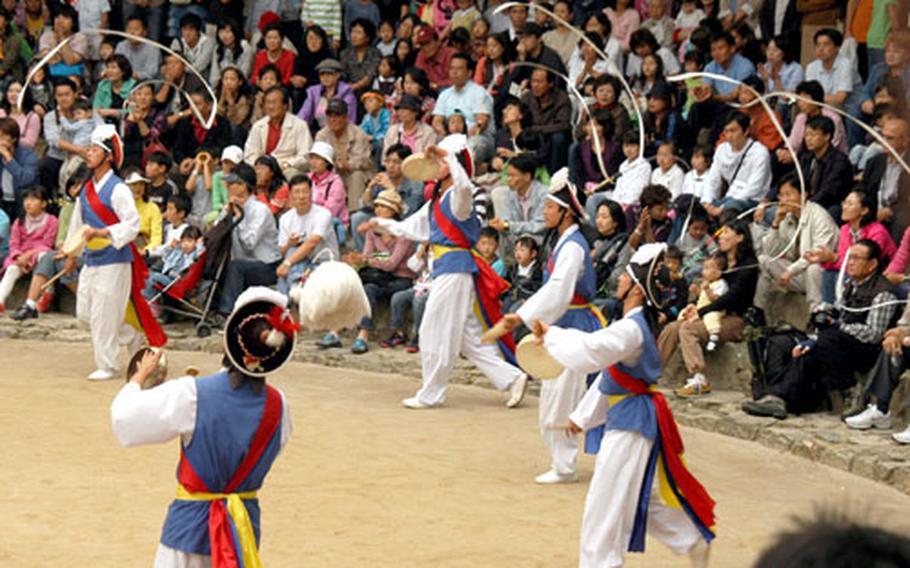 Hundreds of people gather to watch a traditional farmers&#39; dance at the performing area in the Korean Folk Village. (Teri Weaver / S&S) 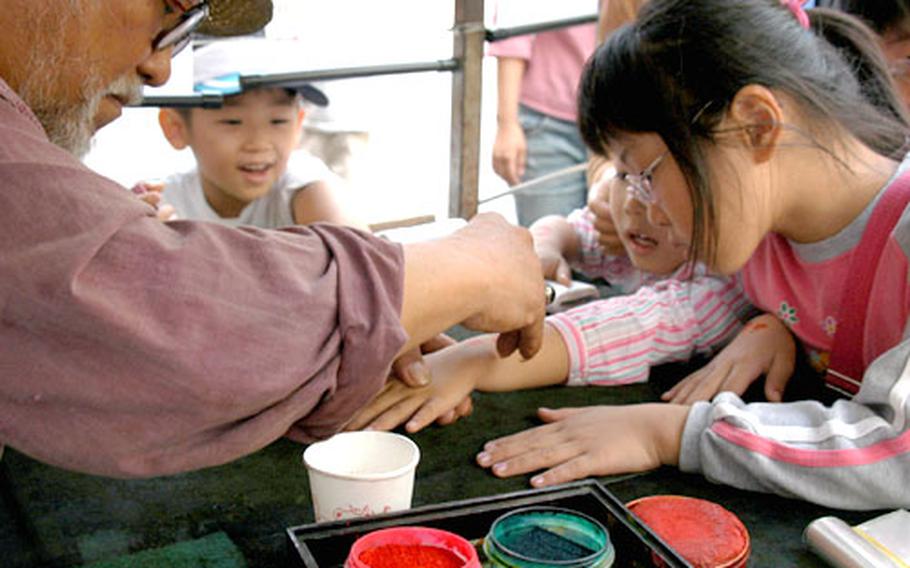 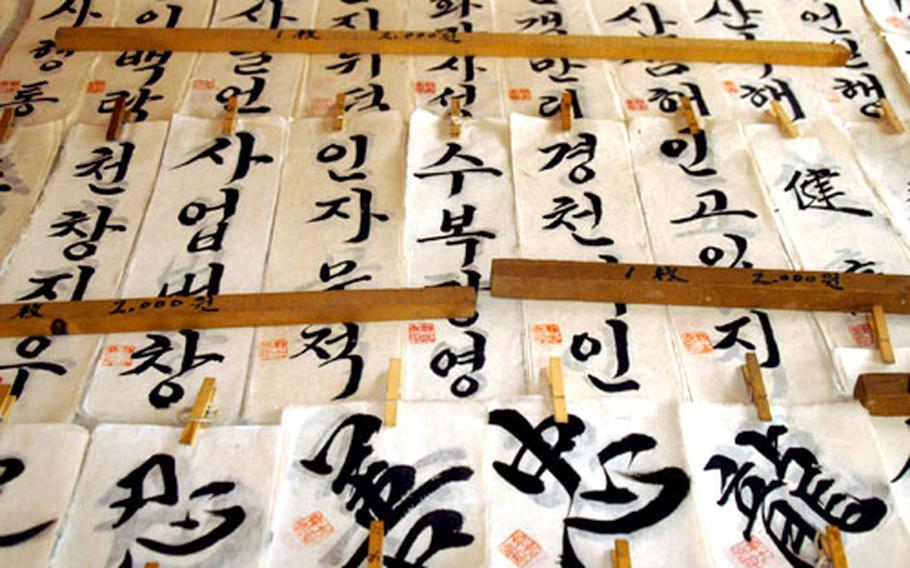 The Korean Paper Workshop near the food court demonstrates how rice paper is made by pressing water and grain together repeatedly to slowly form each piece of paper. Pieces of the paper with messages written in hangul and Chinese characters are on sale for a few dollars. (Teri Weaver / S&S) 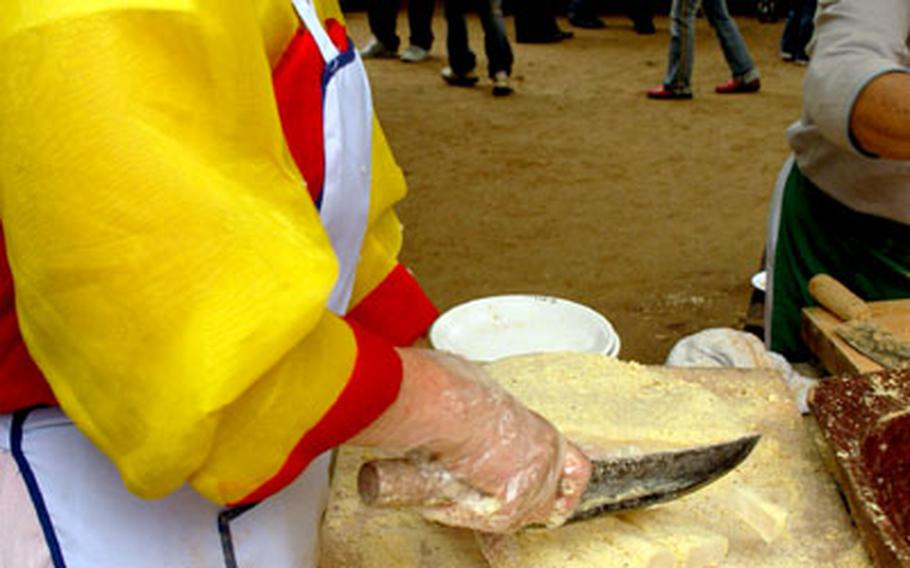 A woman in the Korean Food Court cuts a rice cake for customers. The food court has dozens of traditional Korean dishes for sale. To purchase a meal, go to one of the outer cashier booths and place your order (there are English menus), then proceed to the various food booth to pick up your lunch. (Teri Weaver / S&S)

SUWON, South Korea &#8212; If you&#8217;re looking to visit to the Korean Folk Village during this four-day weekend, plan to stay the entire day.

This living-history village, about an hour outside of Seoul, is more park than museum. It has small orchards, dozens of picnic spots and ample space to let the kids scamper about before Korea&#8217;s frigid winter sets in.

But the village is about more than amusement rides and playgrounds. It&#8217;s a re-creation of a traditional Korean farming community, complete with museums, workshops and displays all dedicated to teaching about Korean life.

The village also provides examples of living and dining in different regions of the peninsula, from the northern mountains to Jeju Island. Visitors can watch how rice paper and pottery are made, how noblemen lived and how farmers laid out their crops of eggplant, radishes, herbs and rice.

The folk village also has ample entertainment for children, including an amusement park with rides, playgrounds with giant swing sets and seesaws and farm animals to pet. Twice daily, drummers and acrobats perform traditional dances to celebrate farming, weddings and other ceremonies. (Get to the performance arena early or else it&#8217;s standing-room only.)

And it&#8217;s not just the kids who play. Lengths of heavy twine set out as jump ropes attract as many adults as children. In the farmer&#8217;s village, adults are more mesmerized than children watching a woman spin silk threads from a pot of larvae. Only a grown man can push a stone rice grinder in a circle to mimic the old-fashioned process for turning rice grains into paste.

The park&#8217;s maps, menus and display signs all are in English. Unfortunately, most of the descriptions inside the museums are written exclusively in Hangul, so bringing a Korean-speaking friend along would be nice.

Some, but not all, of the park&#8217;s workers speak English. Most of the craft workers do not, though they&#8217;ve worked out a simple sign language that helps explain just how they&#8217;re able to do things such as craft a silver-colored spoon from a burnt piece of metal.

The village also has a museum dedicated to the folk traditions of other countries throughout the world, including America. Another museum celebrates the village&#8217;s role as a stage for many Korean movies, television dramas and documentaries. Occasionally, visitors to the village will get a chance to watch an upcoming feature in the midst of filming.

The village is open year-round, including on Korean holidays. The nobleman mansion display is closed from December to February.

Tickets sold at the tourist office include several options for adults and children. The most expensive tickets are 16,000 won (about $16) for adults. That includes admission to all the museums inside the village and the amusement park. Tickets for children start at 7,000 won (about $7). Bring extra money (won only) for food, souvenirs and crafts.