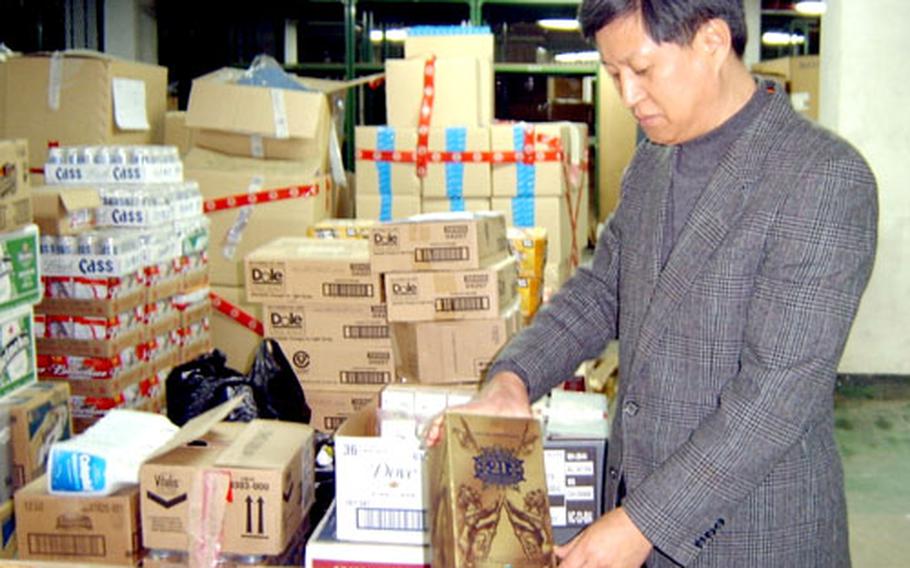 A senior investigator at the Seoul Customs Service, Kim Jong-mu, looks at 21-year-old Scotch whiskey, which can cost as much as 300,000 won ($300) in Korea. The whiskey came from an AAFES store in South Korea and was taken from suspected black marketers, Kim said. (Hwang Hae-rym / S&S)

A senior investigator at the Seoul Customs Service, Kim Jong-mu, looks at 21-year-old Scotch whiskey, which can cost as much as 300,000 won ($300) in Korea. The whiskey came from an AAFES store in South Korea and was taken from suspected black marketers, Kim said. (Hwang Hae-rym / S&S) Instead of digital records of each exchange shopper&#8217;s purchases at the cash register, military investigators rely on sales summaries, paper receipts of popular black market items and store workers&#8217; watchful eyes to catch suspicious buyers, according to USFK.

When it comes to beer purchases, the system is even weaker, officials acknowledge.

Although shoppers are limited to two cases of beer a day or eight cases each month, the only record that tracks each sale is regular cash register receipts.

Sign-in logs at each register were abandoned 16 months ago because the data proved too large to key into a computer program, McCarthy said.

It&#8217;s a weakness that frustrates both U.S. and Korean customs officials and it&#8217;s one the Americans are trying to fix, McCarthy and other officials say.

But installing a computerized sales-tracking system at the 100 or so exchange stores in Korea run by AAFES &#8212; the Army and Air Force Exchange Service &#8212; is complicated, according to Brenda Borland, manager for all stores in South Korea and Japan.

In some respects, South Korea requires a stricter control system to monitor the American goods sold to personnel with base access. Active-duty servicemembers need just show their military identification. Other shoppers must have &#8220;ration cards&#8221; along with military identification to buy the household goods, clothes, furniture, cosmetics, jewelry, sporting equipment, beer or liquor sold at AAFES stores.

Building a tracking system specific to South Korea would require extra expertise, extra money and, in some cases, extra infrastructure to ensure the equipment would work in some of South Korea&#8217;s more rural areas or near the Demilitarized Zone, Borland said.

To make matters more complex, the money &#8212; an estimated $1.3 million to $2.2 million, according to McCarthy &#8212; would have to come from a military budget outside the stores&#8217; own income, Borland said. All profits from AAFES stores must go toward morale and recreation programs designed for servicemembers and their families, she said.

McCarthy said USFK officials are working on implementing a system in the next two years. Until then, AAFES officials and military investigators rely on gumshoe detective work to uncover suspicious purchases among the $200 million in annual South Korea sales, according to AAFES and Air Force Maj. Resti Andin, the USFK customs chief. &#8220;It&#8217;s more manpower-intensive,&#8221; he said.

Investigators must look at gross receipts and use formulas to spot spikes in sales. They must track down the original purchase data and narrow down the cash register, cashier and time of purchase. Then they must find the customer, Andin explained.

AAFES does have &#8220;loss-prevention&#8221; workers, common among most large retail chains, Borland said. Earlier this fall, AAFES workers were instrumental in catching a soldier who repeatedly stole high-priced electronics by walking them out the front door, according to an official from the judge advocate&#8217;s office.

Perhaps one piece of encouraging news is the change in the black market trade itself. In the past few years, South Korea&#8217;s market has opened to increased international trade and its own factories are producing affordable electronics popular to both Korean and American shoppers, say customs officials from both countries.

When Korean customs closes out each case, the nonperishable goods are auctioned off to the Korean public, Kim said. In the end, the money goes back to the Korean treasury, he said.

That, in a nutshell, is what USFK, AAFES and Korean officials say they are trying to do by stopping black-marketing.

YONGSAN GARRISON, South Korea &#8212; In the aftermath of a recent high-profile case involving black-marketed beer, the manager for all Army and Air Force Exchange Service stores in Korea and Japan last week spoke briefly about the matter.

This fall, 17 Koreans &#8212; including one AAFES worker &#8212; were indicted in connection with a scheme to divert 56,000 cases of beer from Area I bases to local businesses, Seoul customs officials have said.

The case actually was more than two years old, AAFES manager Brenda Borland said on Wednesday, and not all of the beer involved in the case came from the military stores.

The large-scale theft was not an issue of keeping a close eye on sales, USFK officials said.

The AAFES worker, Lee Jin-hwa, was found guilty in November in Seoul Central District Court of conspiring to evade tax laws and sentenced to one year in prison. The sentence was suspended for three years.

During Lee&#8217;s sentencing, Chief Judge Jang Sung-wan said he gave a lenient sentence because he was convinced Lee &#8220;had been under heavy stress of [losing] his job&#8221; as the U.S. military realigns its forces on the peninsula. The judge also said Lee was &#8220;pressed to boost sales records.&#8221;

As of Friday, AAFES had taken measures to fire Lee, though he is appealing the matter. Currently, he is on unpaid leave, officials confirmed.