Korea Area I troops find holidays packed with things to do 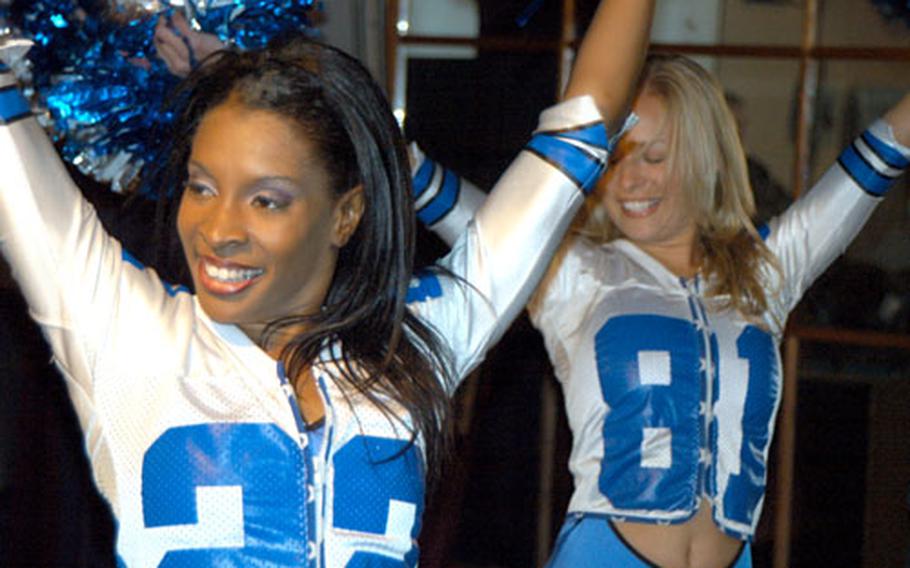 The Dallas Cowboys Cheerleaders perform at Camp LaGuardia earlier this month as part of the holiday activities planned for troops spending the season in Area I. “I don’t know why, but it is always magical. This is their 55th tour, but it is like the soldiers have never seen these girls before,” said Virginia Martin-Brown, marketing director for Morale, Welfare and Recreation in Area I. (Seth Robson / S&S)

Operation Good Cheer, encompassing dozens of holiday events, kicked off Monday with tae kwan do, basketball, movies, and aerobics at bases all over Area I.

Virginia Martin-Brown, marketing director for Morale, Welfare and Recreation in Area I, said her organization was using a range of media, including spots on Warrior Radio, posters and banners, to keep soldiers informed about holiday activities in South Korea.

Entertainment provided by the military is extremely important to the soldiers serving in Area I, she said.

&#8220;The soldiers here don&#8217;t drive and they don&#8217;t have their families with them like people stationed in Area II. It is very important that there are a lot of events to keep these soldiers busy so they have all the attention they need. We are expecting a big turnout for many of the Operation Good Cheer events,&#8221; said Martin-Brown, who expects to spend most of her fourth Christmas-holiday period in South Korea working at Operation Good Cheer events.

&#8220;I enjoy seeing other people happy and not sad or depressed for Christmas. I especially like to see soldiers active,&#8221; she said.

Spending Christmas outside the United States is old hat for the former military wife of 21 years.

During the holidays, she said, &#8220;The overseas environment for Department of Defense civilians and soldiers is a lot different than in the States. We become a new family. We bring food to each other&#8217;s houses. I have not had a lonely Christmas since I have been in South Korea.&#8221;

One of the most popular holiday activities in Warrior Country this year was the visit by the Dallas Cowboys Cheerleaders last weekend, Martin-Brown said.

&#8220;I don&#8217;t know why, but it is always magical. This is their 55th tour, but it is like the soldiers have never seen these girls before. They are extremely ecstatic to see them. They shake hands, take photographs and intermingle with them but they just cannot believe the Dallas Cowboys Cheerleaders are here,&#8221; she said.

An Operation Good Cheer guide lists Christmas and New Year&#8217;s Eve parties and events at all of the U.S. bases in Area I.

Sports are a big component of the holiday program, which is to run until January 4. Operation Good Cheer will include tournaments in volleyball, table tennis, racquetball, pool, swimming, darts and bowling.

PlayStation competitions, Korean games and chess also will be part of the festivities, as will arts and crafts classes, karaoke and golf lessons.

Musical entertainment over the holidays includes bands such as Central Sound, Intensity Band and country rockers Kendrick and the Bellamy Brothers. In addition, disc jockeys are to play country, Latin, Caribbean and oldies music.

Operation Good Cheer off-base activities are to include ski trips and shopping excursions.

As part of Operation Good Cheer, the University of Maryland and Central Texas College are offering a number of free courses that offer soldiers the chance to study topics as diverse as international terrorism, psychology, history, Korean society and personal finance.