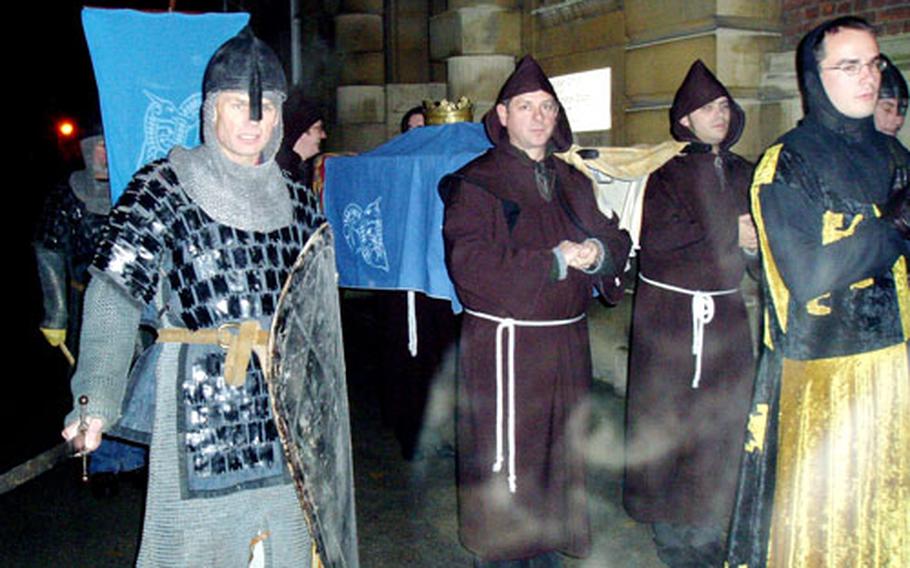 BURY ST. EDMUNDS, England &#8212; It allegedly infected King Henry VIII with syphilis and drove him mad to his deathbed after the 16th century monarch closed this city&#8217;s picturesque abbey.

Decades ago it was summoned to punish Satanists and church vandals.

&#8220;What brought it to this interesting step is the breakdown of democracy,&#8221; says Alan Murdie, spokesman for the Knights of St. Edmund, a local group that draws inspiration from the knights who guarded the town in the 11th Century.

Murdie is leading a campaign against the construction of a Debenhams retail store in the former Cattle Market located near the heart of this historic East Anglia town. Scores of Americans from three nearby Air Force installations call Bury St. Edmunds home.

Murdie and a contingent of about a dozen knights hope to quash the proposed retail site by cursing the merchant and the development group.

First, the knights formally served papers to the groups involved: Debenhams, the Miller Group and Centros Miller, giving 30 days notice before the knights would summon the curse.

The groups declined to acknowledge the 30-day notice.

A Debenhams representative had little to say about the reputed curse.

Late last year, after the 30 days had expired, the knights &#8212; clad in Medieval period clothing &#8212; marched by torchlight through the city&#8217;s Great Cemetery to the door to the historic abbey. There, a ritual referred to as commination began and was later closed at the Cattle Market.

&#8220;The commination is an obscure ritual that calls for God&#8217;s judgment of sinners, in this case the sin of greed,&#8221; Murdie said. &#8220;The results can be death, insanity, destruction of property and diseases, including venereal diseases.&#8221;

The Centros Miller spokesman contends Debenhams is welcome in the city centre, according to input gathered during four years worth of public forums on the development plan.

St. Edmund is an Anglian King who fought against the Vikings and later was beheaded for refusing to abandon his Christian faith in the 10th Century. However, his head and body were miraculously reattached when they were later put together in a coffin. A mythical character of irrefutable strength was then tied to the city&#8217;s legacy.

Debenhams refers to itself on its Web site as Britain&#8217;s favorite department store, with 120 locations across the United Kingdom and Ireland, selling items ranging from lingerie to furniture. The Bury St. Edmunds plan calls for a 90 million pound ($162 million) development.

Murdie, for his part, said time will tell the curse&#8217;s full fury.