Kneeling, with prayers for peace Masakazu Miyagi, 74, prays at the section of a wall in Peace Prayer Park that features the name of a relative killed during the Battle of Okinawa. (David Allen / S&S)

Masakazu Miyagi, 74, prays at the section of a wall in Peace Prayer Park that features the name of a relative killed during the Battle of Okinawa. (David Allen / S&S) 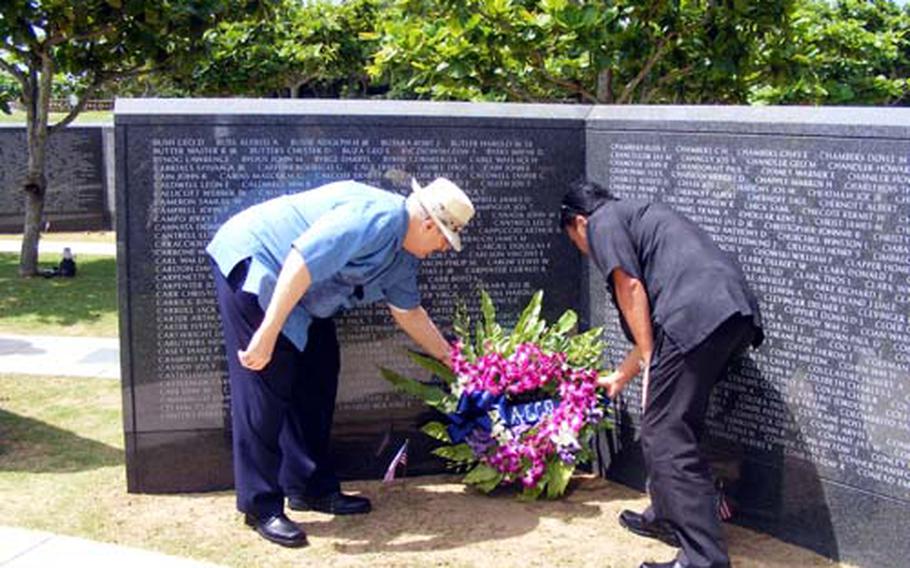 Joe Thompson, former president of the American Chamber of Commerce on Okinawa, and Tony Sakuda, the chamber’s current vice president, lay a wreath at the memorial wall in Peace Prayer Park on Tuesday. (David Allen / S&S) A small American flag flutters in front of a wall containing the names of some of the U.S. troops killed during the Battle of Okinawa. Tuesday marked the 64th anniversary of the end of the 83-day battle at the end of World War II. (David Allen / S&S)

ITOMAN, Okinawa &#8212; Sixty-four years ago, Masakazu Miyagi was a 10-year-old boy living in northern Okinawa, suffering from hunger and homelessness as his island and its people were caught up in war.

His most vivid memory of those days is running blindly from a strafing attack as an American warplane flew over his devastated home.

On Tuesday, he knelt alone by a section of a wall in Peace Prayer Park that contained the name of his father-in-law, who did not survive the Battle of Okinawa, what Okinawans call the "Typhoon of Steel."

"I was carrying all the pots and pans we had at home, tying on both ends of a stick as we tried to evacuate from the gunfire," said Miyagi, who now lives in Ginowan and owns two dental clinics. "Just looking at the name of my father-in-law brings back all the struggles that we had gone through."

He choked back a tear and said he has three children and five grandchildren, but has shared no memories of the battle with them.

Thousands of people visited Peace Prayer Park to commemorate the official end of the battle, June 23, 1945, prefectural officials reported. The park, at Mabuni Hill, site of the last stand of the Japanese Imperial Army during the 83-day battle with U.S. forces, features 1,200 black granite walls that stretch to the sea. They are inscribed with the names of the 240,856 people &#8212; military and civilians from both sides &#8212; who died during the fierce fighting.

Unlike D-Day in Europe, the April 1, 1945, landing by U.S. forces is little noticed on Okinawa. But the end of the battle is a special day, even for American veterans who flocked to the 50th anniversary memorial ceremony, but whose numbers have dwindled since.

No American battle veterans could be found Tuesday at the ceremony.

While many people visiting the park declined to talk to reporters about their experiences, others felt a need to pass down to younger generations lessons they learned as survivors.

Tokitaro Ashitomi, 85, of Urasoe, took his son, Isao, 60, to this year&#8217;s commemoration. They paid their respects at a panel inscribed with the names of Ashitomi&#8217;s mother, father and younger brother. He said he survived only because he was conscripted into the Imperial Japanese Navy. He was stationed on Okinawa, but was called for duty in Tokyo in March 1945, a month before the battle began.

He arrived in Tokyo just after it had been nearly leveled by saturation firebombings. He was in underground Naval Headquarters in Kanagawa when he learned Okinawa had fallen with the loss of one-fourth of the island&#8217;s civilian population, including his parents and a younger brother, who had been conscripted to fight during the battle&#8217;s final days.

Ashitomi said he strongly believes he must pass down his war experiences to his three sons and eight grandchildren.

Isao nodded in agreement. "I want to hear my father&#8217;s stories as much as possible so that I can tell them to my children and grandchildren," he said. "The war is a negative but precious legacy of Okinawa that we must send out to the world as a message for peace."