KMC will hear voices during sound system tests next week 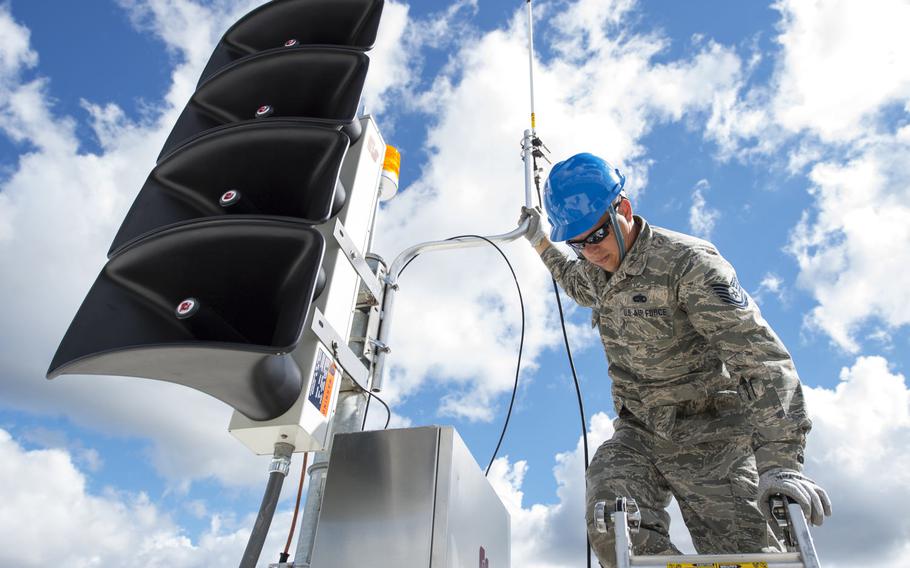 Airmen from the 210th Engineering Installation Squadron upgrade a giant voice stack in St. Paul, Minn., June 19, 2017. Bases in the Kaiserslautern Military Community will test 18 similar loudspeakers for up to an hour each over three days because of recent upgrades. (Austen R. Adriaens/U.S. Air Force)

KAISERSLAUTERN, Germany — Decibel levels will be on the rise next week at Air Force bases in the Kaiserslautern Military Community when officials test recent upgrades to the “giant voice.”

All 18 loudspeakers will be tested on Monday for up to an hour each during the day, Air Force officials at Ramstein Air Base said Thursday. Also known as giant voice systems, the speakers are located at Ramstein, Kapaun Air Station, Vogelweh and Einsiedlerhof.

During the testing, the speakers will play every warning tone and the German and U.S. national anthems, officials said.

The anthem test is scheduled for 5 p.m., when retreat is normally played, a Ramstein spokeswoman said Thursday. But if the anthem is tested at other times, base personnel are expected to pay the proper respects, the official said.

Testing will resume Oct. 5-6 throughout the day. It will include a systemwide test during which all speakers will broadcast at the same time, officials said.

After next week, routine testing will continue between 9 a.m. to 11 a.m. every Tuesday, officials said.

During that time, while individual systems are tested, community members can expect to hear a short-duration warning tone and a verbal test message lasting 5-10 seconds each, officials said.

The 86th Airlift Wing command post is also scheduled to conduct its own giant voice tests every Wednesday at noon.

Public announcement loudspeakers are used on installations to notify the public of emergencies and exercises.