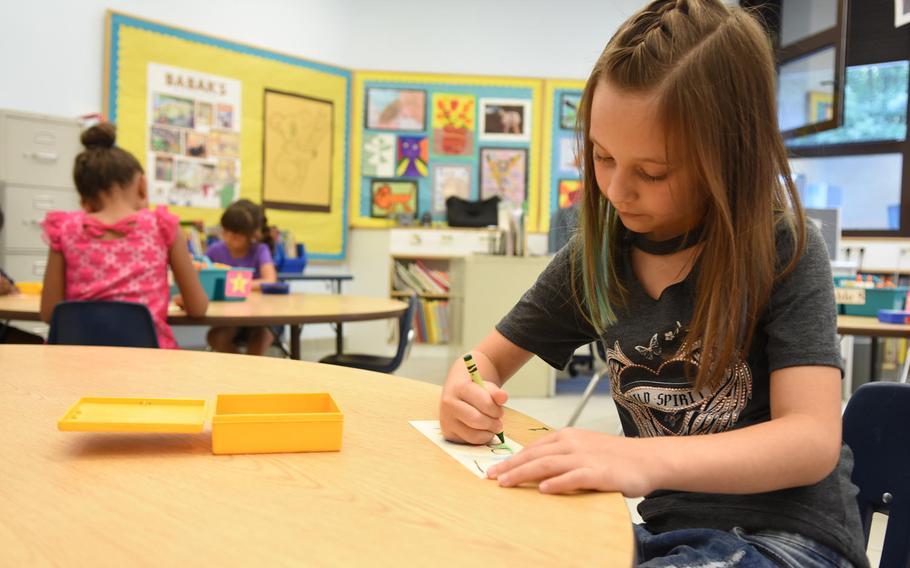 Buy Photo
Embree Bench, a second-grader at Ramstein Elementary School in Germany, designs a name tag on the first day of school on Monday, Aug. 28, 2017.Classes for schools in the Kaiserslautern Military Community and Baumholder will start one hour late on Thursdays this month. (Jennifer Svan/Stars and Stripes)

RAMSTEIN AIR BASE, Germany — Come Thursday, students at Kaiserslautern-area schools can sleep in an extra hour before heading to school.

Classes for all schools in the Kaiserslautern Military Community and Baumholder will start one hour late on Thursdays this month to give educators time to work with their peers within and across grade levels, departments and subject areas.

School officials say the weekly late start will begin on a trial basis, to measure the effect on families and to ensure childcare needs can be met, with plans to continue if the program goes well.

The Department of Defense Education Activity directed its 165 schools about two years ago to include at least 45 minutes of “focused collaboration” per week in teachers’ duty day.

It’s designed to give educators a chance to discuss practices, analyze student data, and design instruction aligned to standards, according to DODEA.

The requirement comes as educators work to implement new College and Career Ready Standards in math and literacy, which, for some teachers, mean entire new lesson plans and expectations for students. The effort mirrors similar initiatives in stateside school districts, where DODEA officials say it’s been effective.

The KMC and Baumholder schools are the last in DODEA to give teachers this collaboration time. Most military schools in the Pacific, the States and elsewhere in Europe have either a weekly late arrival or early departure for students, according to DODEA officials.

The first late arrival begins Thursday for all students in pre-kindergarten through 12th grade at Kaiserslautern, Ramstein, Sembach, Landstuhl, Vogelweh and Baumholder schools. The school day will begin 60 minutes later than usual. For students who ride the bus, pickup will be one hour later.

“We’re really excited to be able to offer this to our educators,” Mary Salerno, Ramstein Intermediate School principal, said at a recent meeting for parents about the change. “As a school leader, I know this is going to make a difference.”

Schools on Ramstein are providing supervised care for students who need it on late-start mornings, while childcare programs are expanding their morning hours to accommodate families already using their services.

In Italy, Spain, Bahrain and Turkey, where the school day for students ends an hour early on Thursdays, “teachers are excited about having dedicated time to work on implementation of these new standards,” said Steven Sanchez, a community superintendent in the Europe South District.

With all the districts aligned on the same early release schedule, teachers at smaller, more remote schools can collaborate virtually, he said.

“The key has been that we absolutely use it for what we said we’re going to use it for,” Sanchez said, noting teachers are required to have an agenda and submit minutes from their meetings to the district office. “It can’t become a time where ... teachers are working on grading papers or something else.”

This school year, four days are already set aside for standards-related training, according to DODEA.

But weekly collaboration allows teachers to review student data more often and immediately adjust their teaching methods, Sanchez said. “I don’t think you sustain any kind of momentum if you do one-shot, one-day (training) activities,” he said.

At Spangdahlem Middle School, teachers alternate between small-group and full-staff collaboration, said Walter Wilhoit, a DODEA Europe West District community superintendent. “They’re doing a study of the middle school child,” looking at what works best for those age groups, he said of the weeks when teachers collaborate as an entire group.

But some parents of Ramstein Intermediate School students, including servicemembers, expressed skepticism. One concern was the loss of four hours of instruction per month; another was that students eligible for special education might not get the instruction they’re supposed to receive and that days are already lost to federal holidays and teacher work days.

Salerno said students at RIS will gain back some time for academics by reducing the transition time between classes on Thursdays and shortening “specials” such as gym and art that day. Lunch and recess will stay the same, and no classes will be eliminated, she said.

Camelia Gunn, who taught in the States for 20 years and recently moved to Ramstein with her husband and 8-year-old son, said she found that “collaboration actually does work for those that are dedicated teachers.

“Most teachers teach in isolation,” she said. “When you look at another classroom in another building and see, ‘Oh, I could do it this way,’ there’s another perspective.

“It changes your focus, it changes your direction; you change your teaching style,” Gunn said, after attending the RIS meeting late last month.

Families with one parent at home seem to appreciate having an extra hour in the morning with their kids, said Melissa Hayes, a community superintendent in the DODEA Europe East District.

“I think that extra hour of family time, it doesn’t seem to interrupt their daily schedule,” she said. “It’s something that they just plan for.”

Maj. Eric Doggett, whose twins are in third grade at RIS, said for him, “the big thing … is really digesting the cost benefit. On the face of it, it feels like less for our children.”

Added his wife, Katherine: “If at the end of the day, my kids are going to be better educated in less than one hour, then the costs outweigh the benefits. But if there isn’t going to be an improvement in education and they’re still losing out on an hour, then it’s a double loss for our children.”