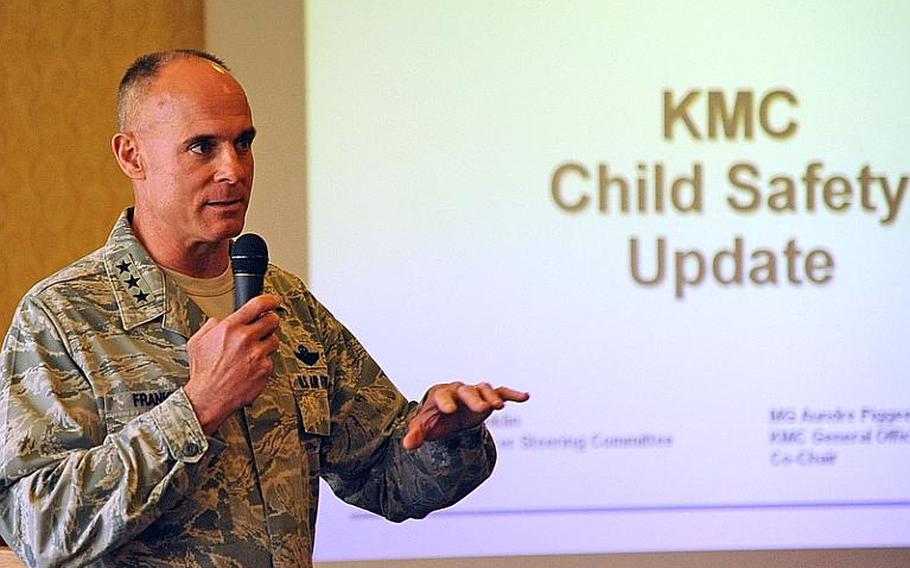 Lt. Gen. Craig Franklin, commander of the Kaiserslautern Military Community and 3rd Air Force, gives an update on actions taken following reports of attempted child abductions and child molestations in the Kaiserslautern Military Community. Franklin was speaking at a town hall meeting Friday morning that was attended by about 150 people. (Michael Abrams/Stars and Stripes)

Lt. Gen. Craig Franklin, commander of the Kaiserslautern Military Community and 3rd Air Force, gives an update on actions taken following reports of attempted child abductions and child molestations in the Kaiserslautern Military Community. Franklin was speaking at a town hall meeting Friday morning that was attended by about 150 people. (Michael Abrams/Stars and Stripes) 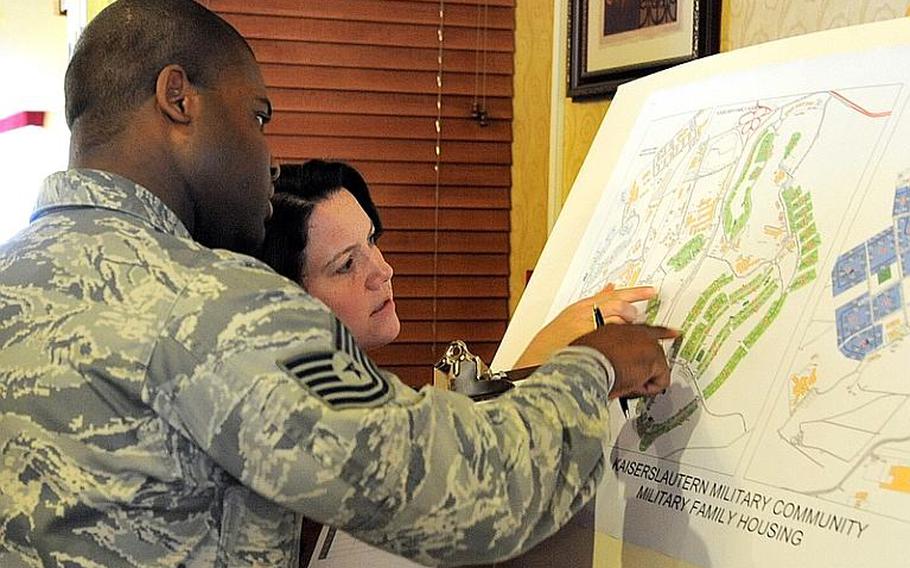 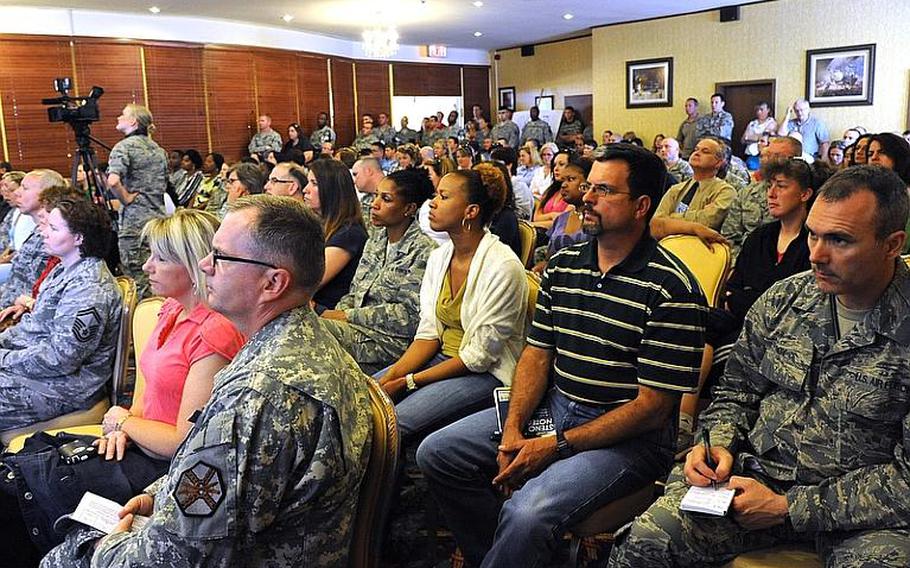 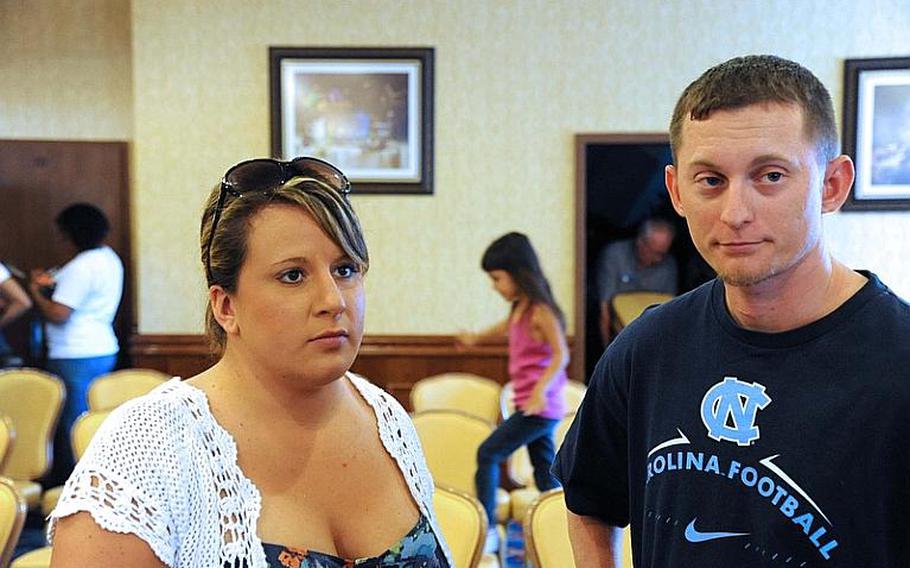 KAISERSLAUTERN, Germany &mdash; Recent reports of molestation and attempted abduction of children on bases in the Kaiserslautern Military Community have risen to the level of the Air Force chief of staff and senior military leaders in Europe, the KMC commander said Friday.

&ldquo;I want to assure you, this has my full attention,&rdquo; Lt. Gen. Craig Franklin told parents at the first of two town halls. &ldquo;I&rsquo;m very concerned.&rdquo;

Two days after another attempted child abduction was reported at a military base in the Kaiserslautern area &ndash; within about 550 yards of a school &ndash; more than 270 people turned out for the meetings Friday at Vogelweh and Ramstein to hear what the military is doing to catch a possible child predator in its midst.

Since January, when the first of four reports of child molestations or attempted abductions was made, officials have sought expert assistance from the National Center for Missing and Exploited Children, and Franklin said he&rsquo;s met with mayors in the Kaiserslautern area to apprise them and local police agencies of the situation on base.

Officials are continuing to tighten security, Franklin said, installing $20,000 worth of surveillance cameras at Kaiserslautern bases and spending $50,000 to install locks on basement storage areas in stairwell housing. More than 500 interviews and 141 records&rsquo; checks have been conducted, he said.

Franklin said base law enforcement, which has stepped up patrols, is doing all it can. But he also appealed to the community.

&ldquo;I need your help,&rdquo; Franklin said, appealing for volunteers for a Neighborhood Watch program. About 40 people signed up after Friday&rsquo;s meetings, base officials said. Earlier in the week, six sessions to train volunteers drew sparse-to-zero attendance.

As the investigation heads into its sixth month, with no confirmed suspect, Franklin said authorities can&rsquo;t conclusively link any of the incidents.

&ldquo;It could be a civilian &hellip; or a dependent masquerading as a military member,&rdquo; he said. &ldquo;We just don&rsquo;t know.&rdquo;

He cautioned that Wednesday&rsquo;s incident, reported by an 11-year-old boy, &ldquo;may have been a misinterpretation by the child. We don&rsquo;t know, but we&rsquo;re treating it as an abduction attempt.&rdquo; Officials are interviewing a couple of &ldquo;persons of interest,&rdquo; he said, adding that the boy was &ldquo;able to give us some information on what he saw.&rdquo;

The first three reported incidents, which date back to August, involved girls between the ages of 5 and 7, who were by themselves or with another child, Franklin said. In Wednesday&rsquo;s incident, the boy was walking alone near a school in Vogelweh housing, Franklin said. The boy reported the suspect was wearing an Army combat uniform blouse and was in a vehicle.

&ldquo;Do we know the kind of vehicle?&rdquo; asked one woman.

Franklin declined to provide details, emphasizing &ldquo;this can happen on foot or it can happen from a vehicle&rdquo; and a suspect could easily change vehicles.

&ldquo;What are they doing to try and lure children?&rdquo; another person asked.

Franklin said he couldn&rsquo;t disclose specifics, but he gave examples of what might attract any child: &ldquo; &lsquo;Hey, want some ice cream?&rsquo; &lsquo;Do you want to go see some puppies? I know where they are.&rsquo; &rdquo;

In some of the incidents, &ldquo;nothing was said,&rdquo; Franklin said. &ldquo;In this last incident, I don&rsquo;t think any words were exchanged.&rdquo;

No similar cases have been reported off base in the Kaiserslautern area, Franklin said, but there&rsquo;s nothing to say the suspect or suspects couldn&rsquo;t shift to an off-base community where children are playing.

In the United Kingdom early last month, an American boy reported that someone pulled at his backpack when he was walking near RAF Lakenheath, an incident that is still under investigation by local authorities. Air Force officials said Thursday that they do not think the incident is related to those in Germany.

After the Vogelweh town hall meeting, parents who attended said they and their children are on edge.

&ldquo;I would like to see more patrols,&rdquo; his wife, Lauren Hites, said, &ldquo;not just riding bikes for a few minutes and then switching off.&rdquo;

&ldquo;Our kids are very familiar with all the cops,&rdquo; Mike Hites said of the couple&rsquo;s 7-year-old daughter and 8-year-old son.

To view the slides presented at Friday&rsquo;s town hall meetings on Vogelweh and Ramstein or for information on how to report suspicious activity, go to Ramstein&rsquo;s LiveWire page.