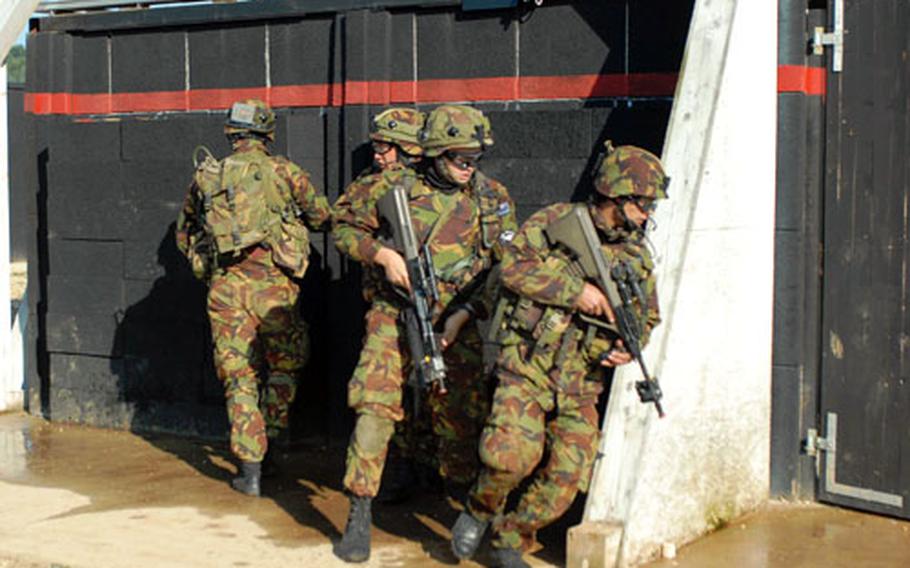 The Kiwis are at Hohenfels participating in the ABCA Armies interoperability exercise &#8212; training designed to test the ability of U.S., British, Canadian, Australian and New Zealand soldiers to work together on battle command systems.

"It has been decades since the New Zealand army has exercised with the U.S. Army &#8230; although we have done things like this with other armies like Malaysia and Singapore," said Lt. Col. Greg Allnutt, 39, who heads the New Zealand contingent at Hohenfels.

For the Kiwi troops, the sophisticated training facilities, complete with Arabic-speaking role-players that the U.S. provides at Hohenfels are beyond anything they have access to at home, he said.

"A lot of what is here we can&#8217;t replicate but we are going through a process to build a major facility at Waiouru (the main New Zealand Army training center)," he said.

The Kiwis are driving U.S. Humvees during the exercise and taking advice from U.S. observer controllers as they practice urban combat skills in the training area&#8217;s mock towns and shoot-houses.

Many of Allnutt&#8217;s troops are veterans of peacekeeping operations in the Pacific and could deploy to Afghanistan, where New Zealand has a Provincial Reconstruction Team, but none has seen actual combat.

"We still train for combat but we haven&#8217;t had to use those skill sets yet," he said.

During the ABCA training, the Kiwis are working alongside Canadians fresh from the fight in southern Afghanistan and Americans just back from Iraq.

"We know how to operate in the environments we have been in &#8212; Polynesia and Southeast Asia. We can share our experiences from the security and stability operations and it will be good to go into a higher-end scenario in a counter-insurgency environment," Allnutt said.

The commander of a Kiwi rifle-company involved in the training, Maj. Aidan Shattock, 30, of Tokoroa, New Zealand, said instructors have been honing urban combat skills in Britain so they can pass them on to troops back home.

"It is certainly a skill that has been focused on in the New Zealand army," he said, adding that his men did a month of close-quarters battle drills earlier this year.

They are looking to build on that with the help of the JMRC instructors, who all have recent combat experience.

One of the U.S. instructors working with the Kiwis, Sgt. 1st Class Brian Harp, 35, of Silverwood, Mich., saw plenty of raids during a deployment to Mosul, Iraq from 2006 to 2007.

He&#8217;s giving the Kiwis tips on things like how to clear a building, find booby traps, protect non-combatants and avoid roadside bombs during urban combat.

Harp&#8217;s words have an impact. He&#8217;s made contact with the enemy numerous times, detained insurgents and survived several IED attacks.

"The New Zealanders are motivated and eager to learn the U.S. techniques &#8212; what other units have used over there that has worked and has been successful to save lives and accomplish the mission," he said.

Pvt. Michael Rankin-Hirst, 24, of Auckland, New Zealand, who recently deployed to East Timor for six months as a U.N. peacekeeper, said he was enjoying the close-quarters battle training.

"They are definitely good skills to have and good skills to learn. We are having a good time working with the Americans and all our other friends and allies.

"We are a big part of a huge family all working towards the same goals," he said.