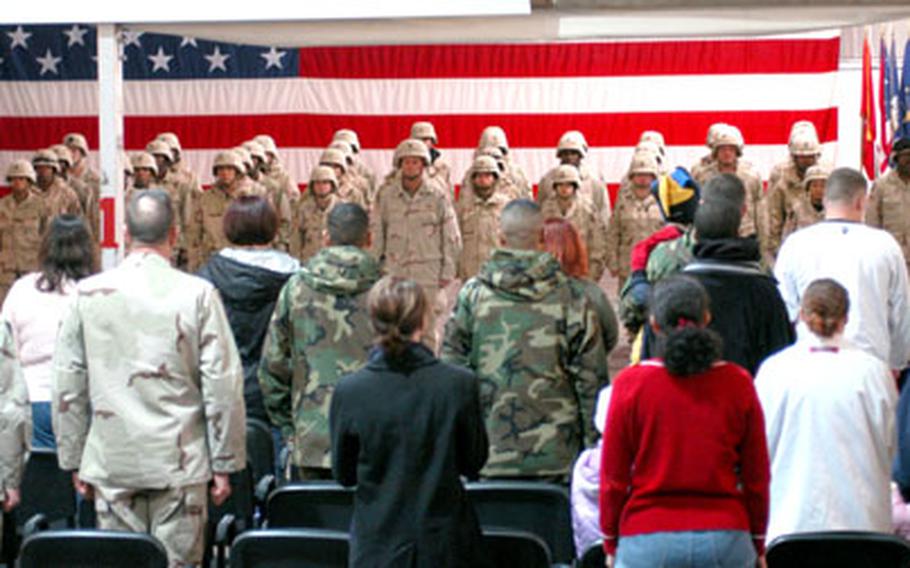 KITZINGEN, Germany &#8212; The 417th Base Support Battalion has spent nearly $2 million on a welcome-home present for the soldiers from the 1st Infantry Division&#8217;s headquarters and support staff based in W&#252;rzburg and nearby Kitzingen.

It has leased nine aluminum-sided portable buildings for use as reception and reintegration centers at Leighton, Harvey and Larson barracks in the two communities.

Capt. Larry Wright Jr., the BSB&#8217;s plans and operations officer, said the heated buildings will fill in for gyms, hangars and meeting rooms during the division&#8217;s busy homecoming from Iraq, which is expected to peak in February.

That will free up those rooms for use by the rest of the community, Wright said.

Thousands of family members will greet returning soldiers for the first time in the three reception centers, one of which has been built at each base. Wright said each contains 500-seat bleachers, office space, a children&#8217;s play area and a movie room.

The large buildings are divided by curtains, so spouses and children can wait on one side while troops fill out paperwork and turn in weapons on the other. Then the returning soldiers line up, and the curtains are pulled back to dramatically reveal them standing at attention, Wright said.

The six reintegration buildings are being erected in a motor pool on Leighton Barracks and should be completed by this week.

Soldiers will attend seven half-days of mandatory reintegration training in the new tents before heading off on 30 days of block leave, Wright said.

The support battalion spent $1.8 million from a special fund dedicated for expenses related to the war on terrorism to rent the tents until late spring, Wright said. If the tents work well they may be purchased for permanent use.

The tents got their first test Dec. 18 when the first 53 soldiers from the Division Support Command returned to Harvey with the 1st ID&#8217;s advance party.