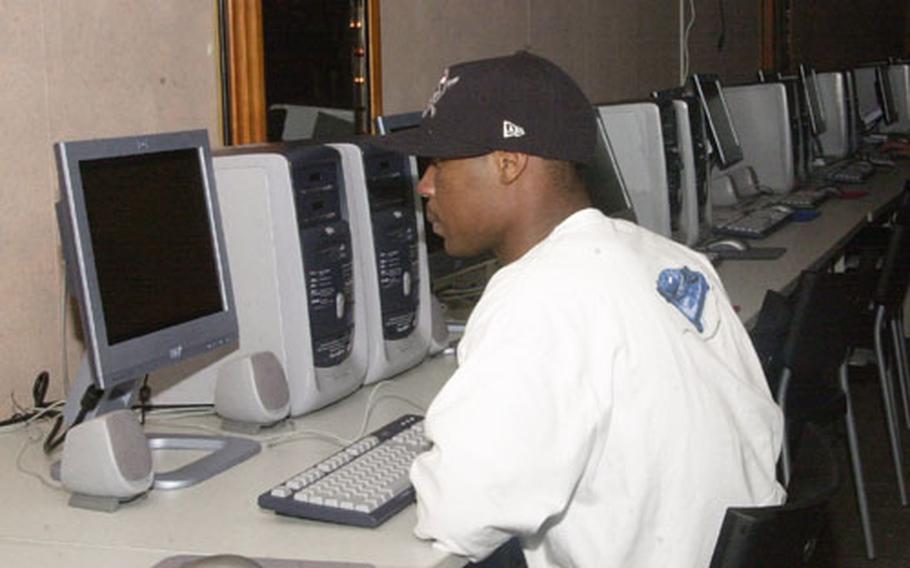 YOKOSUKA NAVAL BASE, Japan &#8212; With the USS Kitty Hawk in dry-dock and junior sailors booted from their living quarters for months as they undergo renovation, ship officials are doing everything they can to soften the blow.

In fact, say some sailors, life on the temporary berthing barges is better than life on the ship.

For one thing, sailors share rooms with &#8212; at most &#8212; three other shipmates; on the Kitty Hawk, most sailors live with dozens of others in berthing spaces.

The barges also are far away from the clanging, ear-splitting work that has encompassed the aging carrier as it undergoes its most extensive overhaul in years.

And after a flurry of activity this week, the main berthing barge now boasts a recreation lounge for sailors that rivals anything on Yokosuka Naval Base.

&#8220;Once everybody got moved in and they started putting in the lounge and stuff, this has turned out a lot better than what people thought it&#8217;d be,&#8221; said Seaman Tony Cruz.

The Kitty Hawk is expected to be in dry-dock until October. While the ship is undergoing repairs, most sailors work an extended shift from 7:30 a.m. to 5:30 p.m.

Until now, when they left the ship to return to the berthing barge, sailors had few places to relax other than their small, four-person rooms.

And for sailors whose liberty status does not allow them to stay ashore after midnight, the new lounge offers midnight movies &#8212; something that used to happen in the ship&#8217;s hangar bay.

The new lounge was created by the ship&#8217;s full-time Morale, Welfare and Recreation representative, the combat systems department and the supply department.

In place of the tattered furniture that arrived with the barge, the new lounge has rows of plush chairs and a new &#8220;bar&#8221; area for snacks and sodas.

Cmdr. Brian Sheppard, the supply officer, also noted that since all the ship&#8217;s galley spaces are shut down for repairs, a temporary mess hall was erected in portable units on the dry-dock pier, right next to the Kitty Hawk.

More than 2,000 sailors have been moved from the Kitty Hawk to one of the three berthing barges. Everything from the ship&#8217;s post office to the security office have been moved and rebuilt elsewhere.