Kitty Hawk sailors moving out and up to roomier quarters 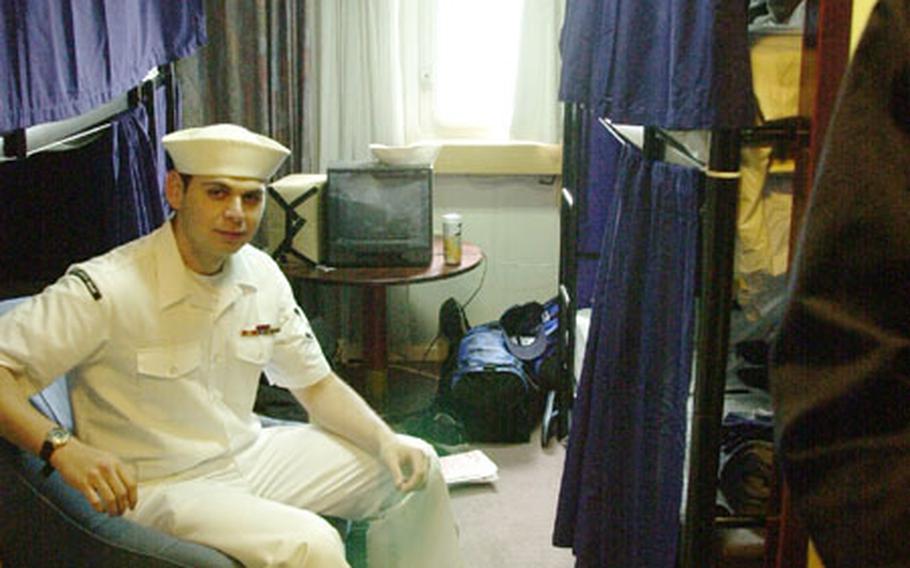 As the Yokosuka-based aircraft carrier readies for a long dry-dock period, thousands of sailors are moving from the cramped ship to a series of berthing barges tied to nearby piers. The general consensus is that, despite a few inconveniences, the barges make for comfortable temporary homes.

&#8220;The best thing is that there are only four guys in each room,&#8221; said Airman Octaviano Maldonado, who is sharing a room on the third deck of the Barge Olympia.

The Olympia is one of three barges that will house more than 2,000 Kitty Hawk sailors for the duration of the summer. Some sailors will continue to live on board the Kitty Hawk, but will move to the barges once renovations start near their berthing spaces.

When that occurs, water and power will be shut off. As the berthing spaces are completed, some of the sailors will be moved back on board the Kitty Hawk, officials said.

But for now, life on the Olympia seems plush.

The ship&#8217;s hallways are lined with garish blue-and-green carpet; some sailors complain of a moldy smell emanating from rooms. A few large common rooms are spread throughout the barge, with ratty chairs and yellow fluorescent lighting.

The Kitty Hawk&#8217;s Morale, Welfare and Recreation team will spruce up the common rooms, turning them into lounges. Each individual room on the barge comes with a television set, but compatibility issues prevent the base cable system from being piped onto the ship.

Right now, one Olympia deck is occupied by sailors from the USS Chancellorsville, which is finishing up a dry-dock period of its own. When those sailors move back to their own ship, more Kitty Hawk sailors will move aboard the Olympia.

The barge is run by private contractors; it was most recently home to U.N. workers in East Timor.

Once across a short gangway from the pier to the barge, sailors step into what could be the front lobby of a two-star hotel.

The glass doors on the side of the barge are emblazoned with a cartoon logo of a saluting porter.

Ship officials say Olympia will be a male-only berthing barge; one of the smaller barges has been designated as the female barge.

&#8220;We didn&#8217;t have enough females to take up a whole floor, but we had enough that it was an issue,&#8221; said Chief Petty Officer Maria Mercado, a Kitty Hawk public affairs officer, who jokingly describes her temporary duty as a &#8220;hotel assistant manager.&#8221;

While Kitty Hawk is in its repair period, many of the crew have been assigned to new jobs. In fact, the newly formed DSRA (Drydock Selected Restricted Availability) Department &#8212; which deals with all issues related to the repair period &#8212; has 800 people, making it one of the largest on the ship.

Some sailors say they&#8217;re already comfortable, and not looking forward to moving back to the Kitty Hawk.

&#8220;I can finally bend my knees when I&#8217;m in my rack,&#8221; said Petty Officer 3rd Class Israel Lopez, referring to the two sets of almost normal-sized bunk beds in each Olympia room.