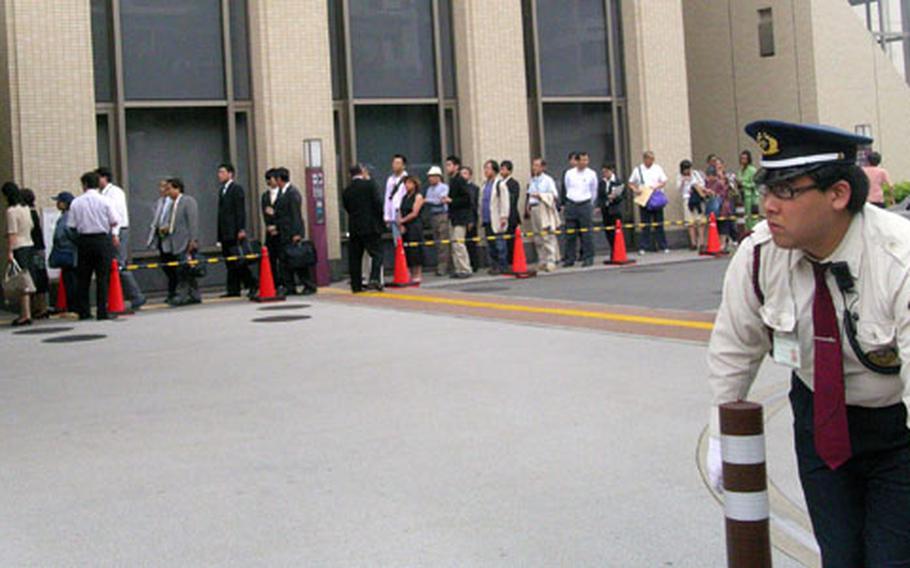 A guard stands outside Yokohama District Court on Friday as people line up for the sentencing of U.S. Navy airman William Oliver Reese Jr. Reese, 22, received life imprisonment for murdering a Japanese woman during a robbery. (Allison Batdorff / S&S)

YOKOHAMA, Japan &#8212; U.S. Navy airman William Oliver Reese Jr. was sentenced Friday to life in prison with forced labor for beating a Yokosuka woman to death while trying to steal her purse.

Reese, a New Jersey native assigned to the USS Kitty Hawk aircraft carrier, admitted killing 56-year-old Yoshie Sato after drinking all night at a local bar. He stopped Sato on the street, asked directions to nearby Yokosuka Naval Base, then tried to grab her purse.

When Sato resisted and screamed for help, Reese dragged her into a nearby building entrance and beat her for 11 minutes, &#8220;throwing her against a concrete wall and stomping on her belly with sport shoes a number of times,&#8221; presiding Judge Masazo Ogura told the court.

Reese took 15,000 yen, about $130, from Sato&#8217;s purse and returned to the base after stopping off at a convenience store. Sato, a Yokosuka native, died at a local hospital later that day.

On Friday, Reese stood before the court in his Navy white uniform. He technically will remain in the U.S. Navy until his time is served.

He must keep his status-of-forces agreement designation to serve the sentence in a Japanese prison, said Commander, U.S. Forces Japan spokesman Cmdr. John Wallach. But Reese won&#8217;t draw a paycheck and will be separated from the Navy with an &#8220;other than honorable&#8221; discharge, he said.

Most SOFA prisoners are sent to Yokosuka Prison in Kurihama, outside Tokyo. Five Navy personnel are there now; none with a life sentence, Wallach said.

&#8220;I myself am dissatisfied with the sentence,&#8221; Sato&#8217;s brother, Shuichi Sanada, said during a news conference held after the sentencing. He was the only person to testify other than Reese during the two trial hearings since March and Friday&#8217;s sentencing.

Only people who saw how badly she was beaten &#8212; so severely her family had trouble identifying her &#8212; would understand the gravity of their feelings, he said.

He said he also didn&#8217;t like how Reese changed his motive from robbery to drunken anger. Reese testified that he didn&#8217;t intend to rob Sato but lost his temper when she backed away from him.

But both prosecutor Toshimi Honda and the judges decided they couldn&#8217;t prove intent, and that, along with other reasons, was why they opted in favor of life imprisonment, they said.

Simply put, it means a possibility of parole in 10 years.

Under Japanese law, life imprisonment is second only to capital punishment. Parole can be granted only if the criminal shows &#8220;contrition.&#8221; All &#8220;lifers&#8221; given parole are on mandatory probationary supervision for the rest of their lives.

One law, called onsha, comes into effect during imperial changes. When an emperor dies, cases are re-examined on a case-by-case basis and guilty sentences can be commuted.

The last time amnesty was granted under a special criterion (which includes instances when the emperor died or when a new one ascended) was when Crown Prince Naruhito got married, said a Ministry of Justice official.

A more general, cabinet-order amnesty has been enacted 10 times since World War II, according to the justice ministry&#8217;s Web site.