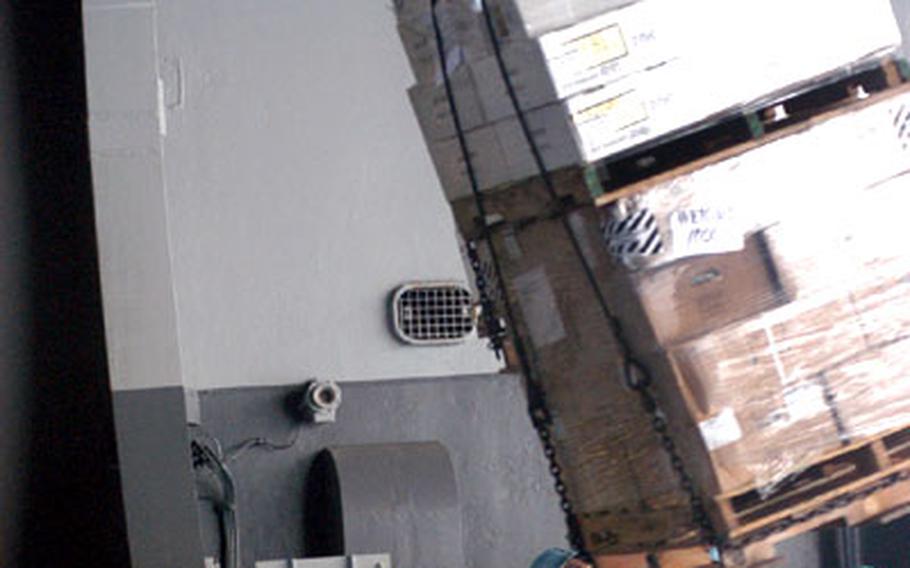 Riggers steady cargo as it arrives in the hangar bay from the USNS Niagara Falls during an underway replenishment. (Kendra Helmer / S&S)

Riggers steady cargo as it arrives in the hangar bay from the USNS Niagara Falls during an underway replenishment. (Kendra Helmer / S&S) 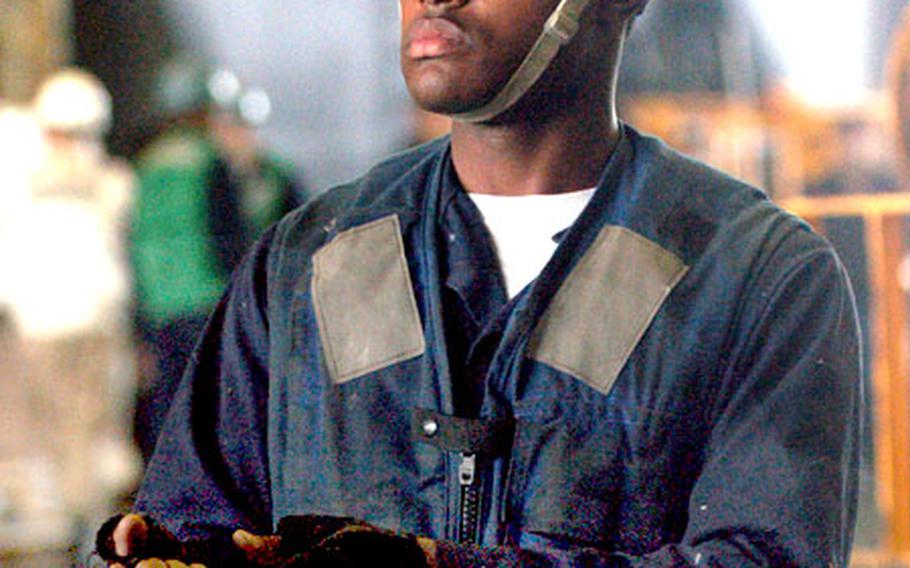 ABOARD THE USS KITTY HAWK &#8212; This aircraft carrier has a helluva grocery bill.

About once a week, a replenishment ship pulls alongside the USS Kitty Hawk with enough food to feed the nearly 5,500 people on board.

About $400,000 each time, said Warrant Officer 3 David Webb, officer for the food-service division of the Supply Department.

Chief Petty Officer Rommel Tagle, cargo chief for the ship, works 18 hours a day contacting sources in the United Arab Emirates to ensure everything is on target for delivery.

Overseeing the movement of all that cargo, including everything from spare parts to mail, is the material division of the supply department.

&#8220;Once it hits the deck, we have to get it broken down off the pallets and move it to where it needs to go,&#8221; said Lt. Tim Brown, material officer for the Yokosuka, Japan-based carrier.

On Saturday, the USNS Niagara Falls delivered 20,000 pounds of cargo on 400 pallets via a helicopter and lines tied up between the ships in the Persian Gulf.

After the deck department got the cargo safely across the water into the hangar, the supply department took over. About 120 sailors moved the goods from the hangar and flight deck.

The cargo is broken down into boxes, and two-man teams load it on to metal carts, quickly moving it to one of two conveyor belts.

Sailors toss the boxes to another sailor standing in a cellar-like compartment, where it&#8217;s put on belts taking it below deck.

A chain of troops down there lines up to sort the boxes into the ship&#8217;s seven freezers, two large refrigerators or four storerooms.

About a week later, the process starts all over again.