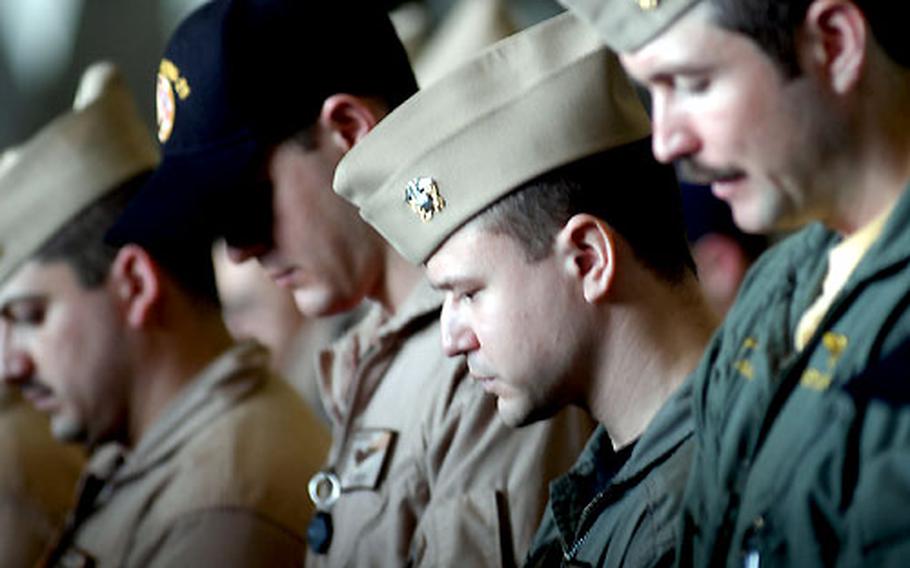 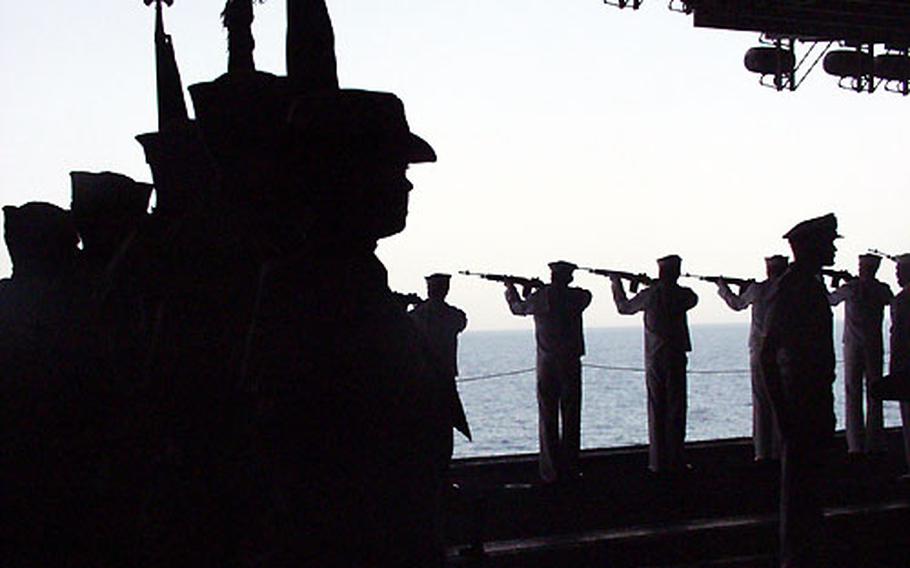 Members of an honor guard, at left, stand as sailors fire a salute during Thursday&#39;s memorial service. (Kendra Helmer / S&S) 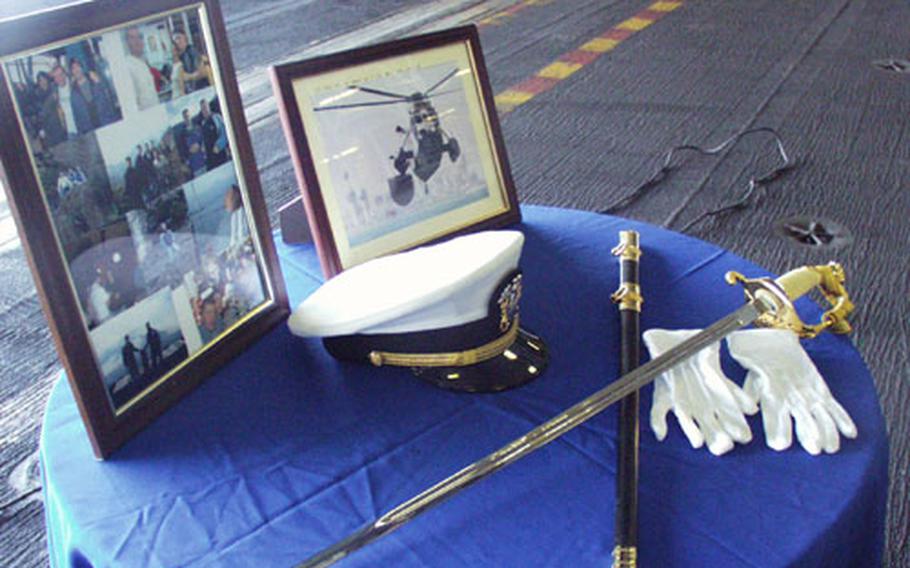 On display at the memorial service were Lt. Thomas Adams&#39; dress white hat, white gloves and cutlass. Next to them was a framed photo of a Sea King helicopter from his British friends. Another frame had a collage of 10 photos. (Kendra Helmer / S&S)

ABOARD THE USS KITTY HAWK &#8212; Lt. Thomas Mullen Adams was fond of anything European: his BMW, the comedy troupe Monty Python, pubs and soccer. Especially soccer.

His passion prompted him to ask for duty on the Japan-based USS Kitty Hawk. That way, he could see last year&#8217;s World Cup action as Japan was host to some of the championship games.

In the fall, the U.S. Navy flight officer moved to England in an exchange program with the Royal Navy. He bought a BMW and joined a local soccer team.

In an at-sea memorial Thursday on the Kitty Hawk, a bell tolled seven times for Adams and six British servicemembers killed when two Royal Navy Sea King helicopters collided after takeoff from the HMS Ark Royal in the Persian Gulf.

A dust storm clouded the morning sky as hundreds of sailors gathered in the hangar bay to remember Adams, who would have turned 28 next week.

&#8220;He could hold a conversation with just about anybody,&#8221; said Lt. John Joseph, drawing knowing smiles and nods from teary sailors.

Before the memorial, Joseph and Lt. Grant Koenig, who went to the U.S. Naval Academy with Adams, talked about their friend. Adams was a member of their Carrier Airborne Early Warning Squadron 115, known as the Liberty Bells, for three years until his transfer in October.

During the 2002 World Cup, he traveled nearly two hours from Atsugi Naval Air Facility to Yokohama nightly to watch the matches in British pubs.

Adams worked command and control from the back of an E-2C Hawkeye with the Liberty Bells from 1999 to fall 2002.

Adams had a good sense of direction, which they called &#8220;Dumpy-dar.&#8221; He and his friends would often take different routes to a destination. When friends arrived, &#8220;sure enough, he was standing there waiting,&#8221; Joseph said.

Adams moved to Helston, England, in October. Three months later, as an exchange officer with the Royal Navy&#8217;s 849A Squadron, he deployed to the Persian Gulf.

He and Koenig exchanged e-mails the night before the collision. They were planning a cross-deck exchange of British and U.S. troops.

The squadron saw news of the helicopter crash and that one American was killed. Joseph and Koenig knew there was only one American in the unit.

Joseph did a fly-by in a Hawkeye for a memorial service on the British ship on March 31. Koenig talked to Adams&#8217; friends at that service.

Family members told their local newspaper that Adams liked the Royal Navy because each ship has a pub and he was allowed weekly 20-minute phone calls home.

After Thursday&#8217;s memorial, friends consoled each other near his dress white hat, white gloves and cutlass displayed on a table. Next to them was a framed photo from his British friends of a Sea King helicopter.

Another frame held a collage of 10 photos of the tall blond and his buddies traveling in Australia and Hong Kong. In one photo, he was getting scuba gear for lessons in Guam; in another, he smiled from Japan&#8217;s Mount Fuji.