Kitty Hawk patrol to expire in 2008 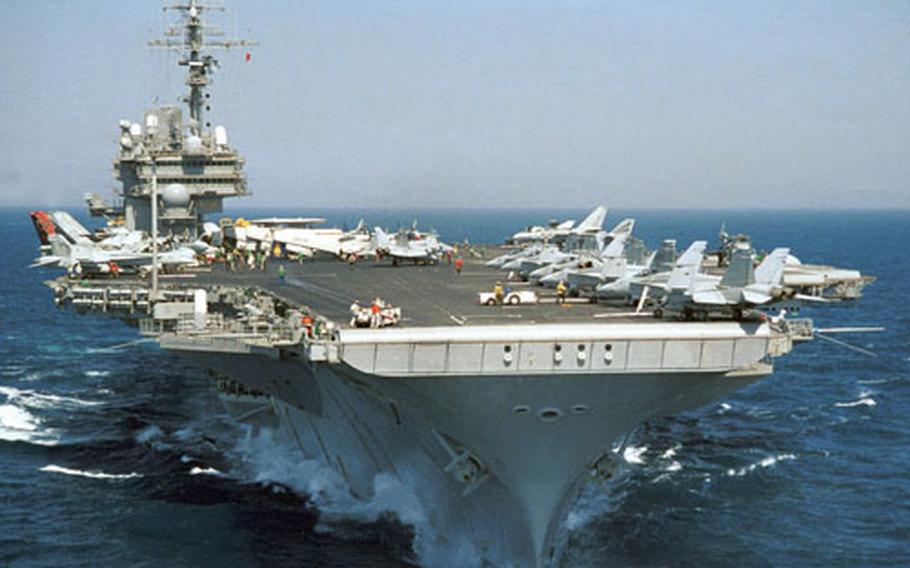 Navy officials announced that the USS Kitty Hawk, a 45-year-old aircraft carrier powered by steam turbine engines, is scheduled to remain in Japan through 2008. (Courtesy of U.S. Navy)

Navy officials say the USS Kitty Hawk, a 45-year-old aircraft carrier powered by steam turbine engines, is scheduled to remain in Japan through 2008.

Adm. Thomas Fargo, who heads up the Pacific Command, hinted in comments recently that a nuclear-powered ship would replace the Kitty Hawk. However, on May 7, Rear Adm. Jonathan W. Greenert, deputy commander of the Pacific Fleet, clarified Fargo&#8217;s comments.

Fargo &#8220;merely said that the most capable carrier would replace the carrier. He did not say that carrier would be nuclear powered,&#8221; he said.

The final year of service in Japan for the Kitty Hawk was previously speculated to be between 2006 and 2008.

&#8220;No final decisions have been made regarding the replacement of USS Kitty Hawk, which is scheduled to retire in 2008,&#8221; he explained.

&#8220;Any decisions concerning the future forward deployment of ships to Japan will be made in close cooperation with the government of Japan,&#8221; Wallach stated. &#8220;The USS Kitty Hawk is currently forward deployed to Yokosuka, Japan, until 2008.&#8221;

The USS John F. Kennedy, only seven years younger than the Kitty Hawk, is the only other aircraft carrier powered by steam turbines.

President Bush promoted Greenert last week to the rank of vice admiral and appointed him future leader of the 7th Fleet, the Navy&#8217;s largest forward-deployed fleet and home to the Kitty Hawk. He will replace Vice Adm. Robert Willard, who assumed the command in July 2002.