Kitty Hawk in Pearl Harbor after its last exercise 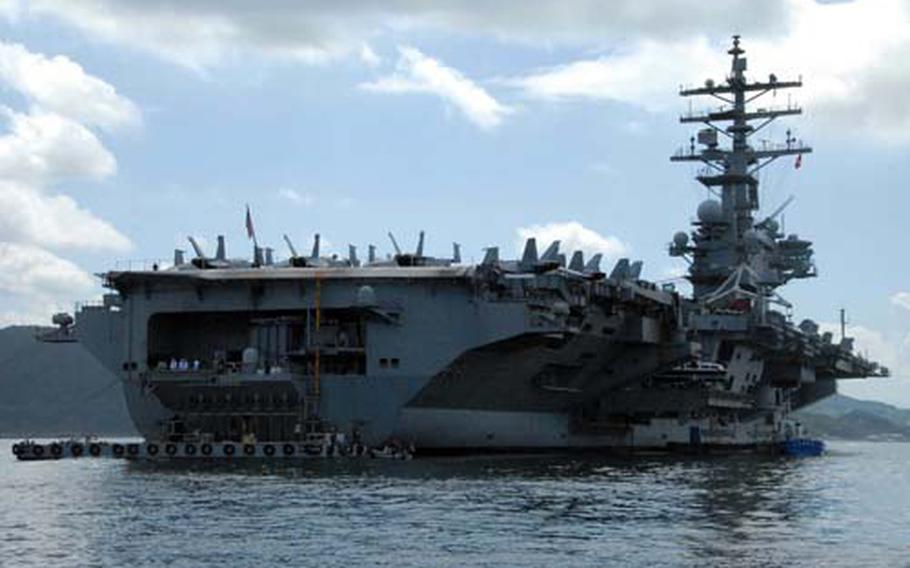 The USS Kitty Hawk pulls into Pearl Harbor on Tuesday after participating in the Rim of the Pacific exercise, the ship&#39;s last exercise before its scheduled decommissioning. (John J. Mike / Courtesy of the U.S. Navy)

The USS Kitty Hawk pulled into Pearl Harbor on Tuesday after finishing its last exercise before a scheduled decommissioning, the U.S. Navy said.

The aircraft carrier stood in for the USS George Washington, which could not participate in July&#8217;s Rim of the Pacific, the largest naval exercise in the world, due to a recent fire.

The 47-year-old Kitty Hawk was part of Task Force 170 and served as a command platform during the RIMPAC exercise, the Navy said.

The aircraft carrier will now head back to the States for decommissioning next year.

The Navy had planned to turn over all Kitty Hawk duties to the George Washington during a June ceremony in Pearl Harbor, but the plan was delayed when a fire damaged electrical cabling and components in about 80 of the aircraft carrier&#8217;s 3,800 spaces.

The George Washington is being repaired in San Diego and could still reach Yokosuka, Japan, to replace the Kitty Hawk by early fall, Navy officials have said.

About 20 to 30 foreign military servicemembers worked aboard the Kitty Hawk as liaison officers during the exercise, the Navy said.