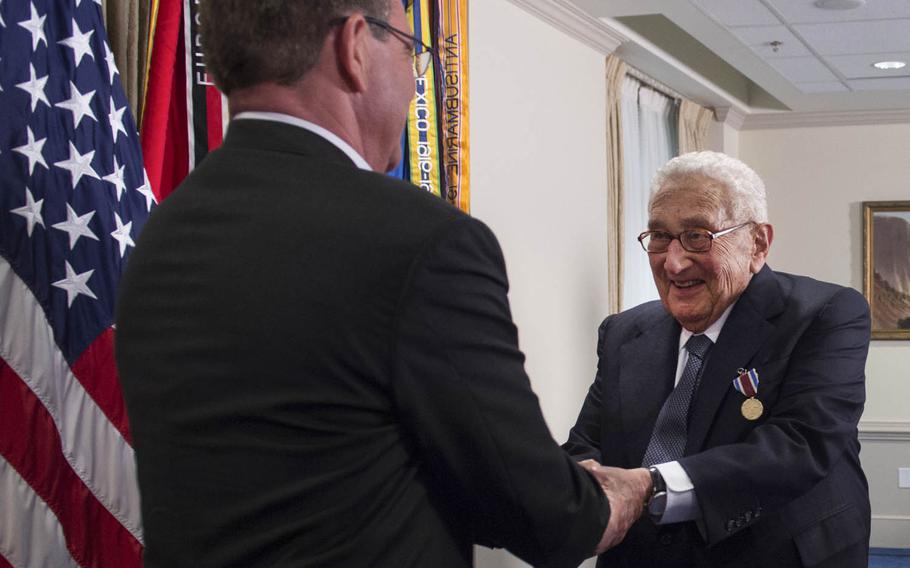 Kissinger, 92, was given the Department of Defense Distinguished Public Service Award on Monday at the Pentagon for “orchestrating countless foreign policy victories” since he became national security adviser to President Richard Nixon in January 1969, a DOD statement said.

Kissinger, an Army veteran of World War II and a Bronze Star recipient, was promoted to secretary of state under Nixon, a post he kept in Gerald Ford’s administration.

Kissinger is credited largely with thawing relations with the Soviet Union, opening and formalizing relations with China and negotiating the 1973 Paris peace accords that ended the Vietnam War, for which he was awarded the Nobel Peace Prize.

“While his contributions are far from complete, we are now beginning to appreciate what his service has provided our country, how it has changed the way we think about strategy and how he has helped provide greater security for our citizens and people around the world,” Defense Secretary Ash Carter said during the ceremony.

Kissinger remains a highly polarizing figure, with just as many calling for his prosecution for war crimes in Southeast Asia and South America as those who credit him for ending the Vietnam War and fighting the communist threat.

Support for Kissinger and his policies has become a 2016 presidential campaign issue with Vermont Sen. Bernie Sanders criticizing former Secretary of State Hillary Clinton for her friendship and counsel with Kissinger.

Kissinger received the Presidential Medal of Freedom, the nation’s highest civilian award, from Ford in 1977 and the Medal of Liberty in 1986. He has authored more than a dozen books on foreign policy and continues to consult with U.S. presidents and government leaders.