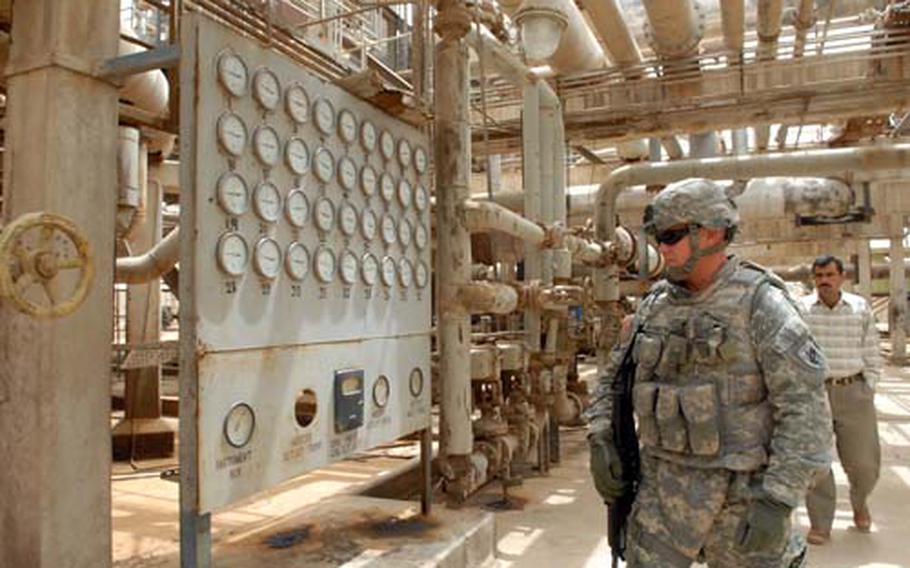 Maj. John Bennett, a civil affairs officer with Company A, 418th Civil Affairs Battalion, walks past analog gauges at Northern Oil Co.’s Stabilization Plant 1 near Kirkuk. Although the plant was built in the 1940s and hasn’t been refurbished in 30 years, the company must rely on it for the majority of its oil processing because of attacks on a newer plant. (James Warden / S&S)

Maj. John Bennett, a civil affairs officer with Company A, 418th Civil Affairs Battalion, walks past analog gauges at Northern Oil Co.’s Stabilization Plant 1 near Kirkuk. Although the plant was built in the 1940s and hasn’t been refurbished in 30 years, the company must rely on it for the majority of its oil processing because of attacks on a newer plant. (James Warden / S&S) 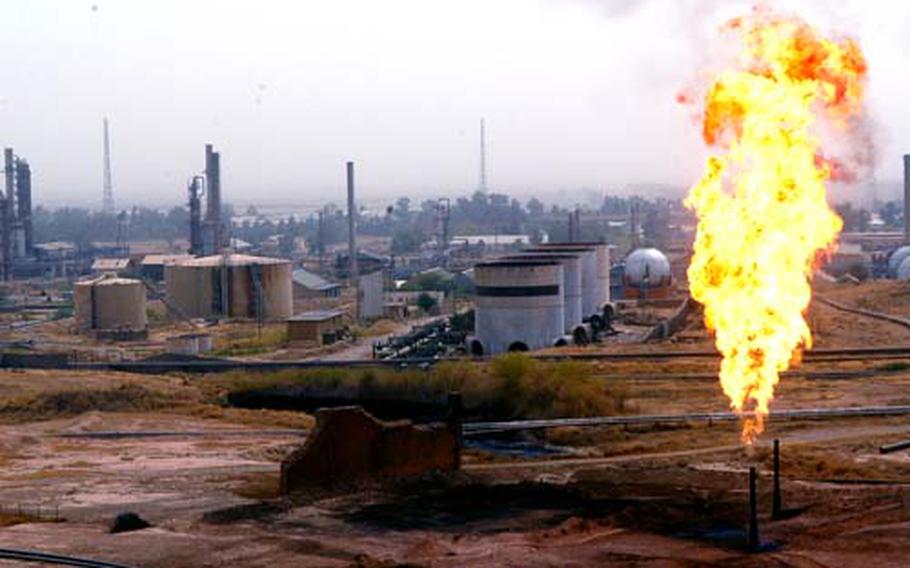 Hydrogen sulfide burns off as it leaves a pipe in Kirkuk at Northern Oil Co.&#39;s Stabilization Plant 1. The 1940s-era facility is one of just two plants the company has to remove the explosive, noxious gas from the oil, which is a bottleneck in the Kirkuk area’s oil production. (James Warden / S&S) 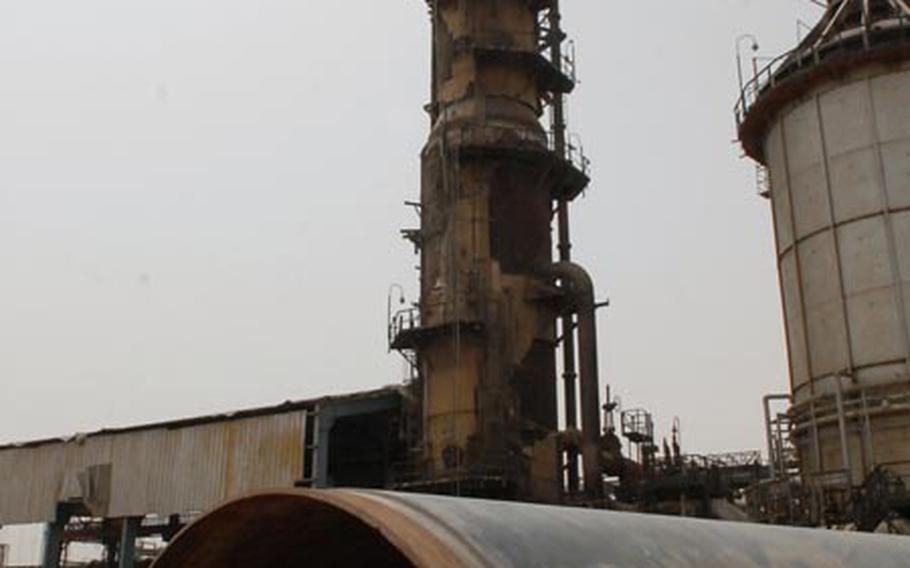 And in the center of it all is a skyscraper-sized furnace that Maj. Robb Marshall, the operations officer for 3rd Battalion, 6th Artillery Regiment, likes to call "the belly of the beast." The comparison is apt: The furnace rumbles like an entire company just ate a bad batch of falafel and it reeks just as badly.

"You always know when you&#8217;re having a good day because the flares are up," Marshall said. "The worse the smell, the better the day."

The lack of a comprehensive law covering Iraq&#8217;s oil and natural gas has scared away many drillers from the country&#8217;s lucrative oil fields. Yet bottlenecks further along in the process are what&#8217;s hurting Kirkuk&#8217;s production &#8212; not political debates about who manages the oil. The problem lies in processing plants like the aging Northern Oil Co. plant, Marshall said.

With oil surging in price, nations are aggressively seeking new sources and trying to exploit the ones they have. Oil is a key resource in Iraq, generating nearly all of the government&#8217;s $41 billion budget in 2007, according to the Council on Foreign Relations.

But Iraq has been slow to fulfill its potential, hampered by aging facilities, corruption, and attacks and oil smuggling by insurgents.

All but one of the four oil fields in Kirkuk produce petroleum heavy in hydrogen sulfide, an explosive, noxious gas, said Capt. Zebulon Pike, a member of the 1st Armored Division&#8217;s Power, Oil and Infrastructure team.

In the United States, companies capture this gas and put it to work in power plants and other places. But Iraq&#8217;s infrastructure isn&#8217;t developed enough to safely use it, and the oil is dangerous until the gas is removed.

Companies depend on processing plants to clean up the crude. The plants heat the oil to separate the gas from the liquid. Pipes then carry the hydrogen sulfide away from the oil, and flames burn the gas as it is released into the air, wafting a scent like burning tires over Kirkuk.

Planners are working to repair two of the damaged towers by stripping the fourth tower, something that should happen in the next month or two, Marshall said. But they will need to shut down the plant for two weeks to get them up and running.

The gains will be worth it in the long run, allowing the new plant to process about 660,000 bpd on its own. That will cover all the oil pumped by Northern Oil Co., allowing workers to close the old plant for renovation and reopen it to take on the less onerous job of merely augmenting the oil supply, he said. Pike hopes Northern Oil can process more than 1 million bpd five or 10 years down the road &#8212; a significant increase when all of Iraq is now producing 2 million bpd.

Despite the challenges, Kirkuk is still reaching prewar levels of oil exports. It has shipped 13 million barrels each month since March and could soon ship 15 million barrels.