Kirkuk Arabs debate whether to stay or go 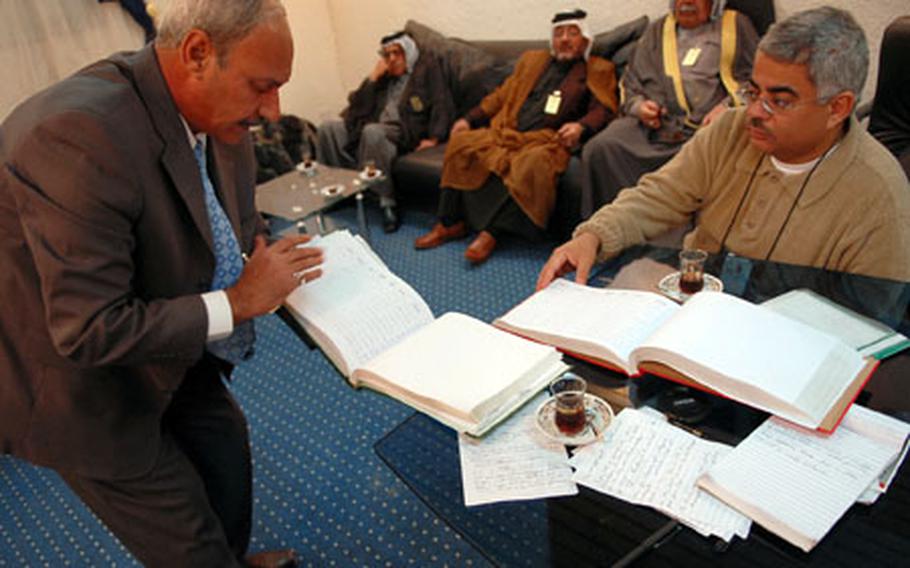 Salah Alrakabi, left, flips through the pages of several notebooks that are filled with signatures of Arabs preparing to leave Kirkuk as part of the normalization process. He coordinates a group of Shiite Arab leaders who say there have no incentive to stay in Kirkuk. (Zeke Minaya / S&S)

Salah Alrakabi, left, flips through the pages of several notebooks that are filled with signatures of Arabs preparing to leave Kirkuk as part of the normalization process. He coordinates a group of Shiite Arab leaders who say there have no incentive to stay in Kirkuk. (Zeke Minaya / S&S) 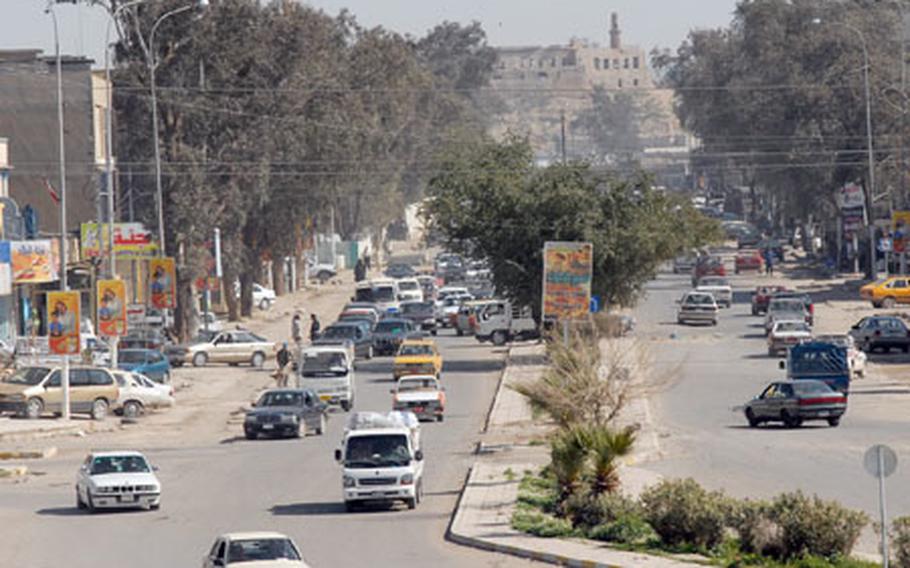 Downtown Kirkuk as seen on March 15. In the background is Kirkuk Citadel, an ancient fortification built around 850 B.C. (Zeke Minaya / S&S)

KIRKUK, Iraq &#8212; Salah Alrakabi flips through the pages of several notebooks that are filled with signature after signature. In all, more than 12,000 Arabs have signed the pages to state their commitment to depart Kirkuk, he said.

Alrakabi said that the members of his group were brought to Kirkuk to support the repressive policies of Saddam Hussein&#8217;s former regime and they are eager to return to their original provinces.

But some Arab political leaders in the province don&#8217;t acknowledge the desire of Alrakabi and his group &#8212; or of any Arab &#8212; to leave the province. They say few Arabs have left the province, preferring to stay to ensure their voices are heard in an upcoming referendum to decide the fate of the city, some leaders have said.

&#8220;People are saying that we are born in Kirkuk and we are not going to leave Kirkuk,&#8221; said Muhammad Khder Gharib, one of six Arab provincial council members. &#8220;Kirkuk is an Iraqi province, why should we leave?&#8221;

Though Kirkuk has so far been spared the kind of bloodshed suffered in Baghdad, the battle for the city is in full swing in the provincial halls of governance, with competing claims and gamesmanship among politicians and interest groups.

Kirkuk residents are slated to choose by the end of the year to either join the Kurdistan semiautonomous region or remain part of Iraq.

The vote will take place after the restoration of the demographic balance that existed before Saddam tightened his grip on the region by removing Kurds and bringing in Arabs, whom he felt were easier to control.

The Iraqi government is working to restore the original balance in a process called normalization. It&#8217;s unlikely to complete the efforts by the end of the month, as originally scheduled.

Alrakabi said Arab people who came to Kirkuk as early as the late 1960s and early &#8217;70s started feeling used by Hussein&#8217;s regime. They were enticed to come north by offers of employment and housing grants, but also, at times, brought in by force.

But, Alrakabi said, a new round of games has begun. He said that his group has been pressured by militant Arabs based in the majority Sunni city of Hawijah, about 43 miles to the southwest of Kirkuk.

While it has been widely believed that all Arabs &#8212; whether Shiite or Sunni &#8212; were vying with Kurds for power in Kirkuk, Alrakabi said the members of his groups sympathize with the displacement of their Kurdish neighbors.

Kurds dominate the political landscape in Kirkuk, holding 26 of the 41 provincial council seat as well as control of the security forces. Tens of thousands of Kurds have returned to Kirkuk, many hunkered down in encampments waiting for the processing of property claims.

The head of the Kirkuk provincial council, Rizgar Ali Hamajan, a Kurd, scoffs at the description of Kirkuk as a powder keg ready to explode in ethnic violence, as described by the Iraq Study Group report last December.

Hamajan believes the vote should go on as scheduled.

But Turkmen councilmember Tahsin Kahya said that the Iraq Study Group&#8217;s description of Kirkuk was accurate and a vote on the future of Kirkuk should be delayed to avoid any dangers.

&#8220;It&#8217;s going to be explosive, because there is not full participation between Arabs, Turkmen and Kurds. Each ethnic group works for themselves,&#8221; he said. &#8220;The way the Kurds manipulate the media and newspapers you would think only Kurds lived in Kirkuk. What if Arabs and Turkmen boycott [the vote]? What do you think will happen?&#8221;

The Kurds need to give some guarantee, he said, that they are working for the common interest.

Arab and Turkmen provincial councilmembers, who have boycotted meetings for several months, have attempted to get Kurdish leaders to allot high-ranking directorship positions in the government along ethnic lines. The Kurds have mostly ignored their requests.

Arab leaders, furthermore, want lifted what they said was a hiring freeze on Arabs for municipal positions.