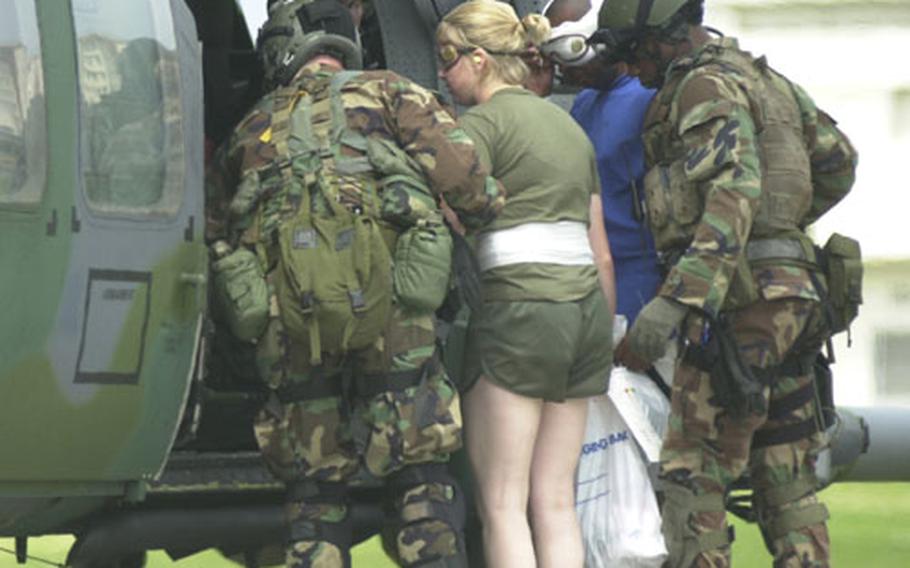 "Victims" are loaded onto an Air Force HH-60G Pave Hawk helicopter on Camp Kinser for a short flight to the U.S. Naval Hospital Okinawa as part of a mass casualty drill Thursday. The most "critical" patients were flown to the hospital just as they would be if it were a real emergency. (Fred Zimmerman / S&S)

"Victims" are loaded onto an Air Force HH-60G Pave Hawk helicopter on Camp Kinser for a short flight to the U.S. Naval Hospital Okinawa as part of a mass casualty drill Thursday. The most "critical" patients were flown to the hospital just as they would be if it were a real emergency. (Fred Zimmerman / S&S) 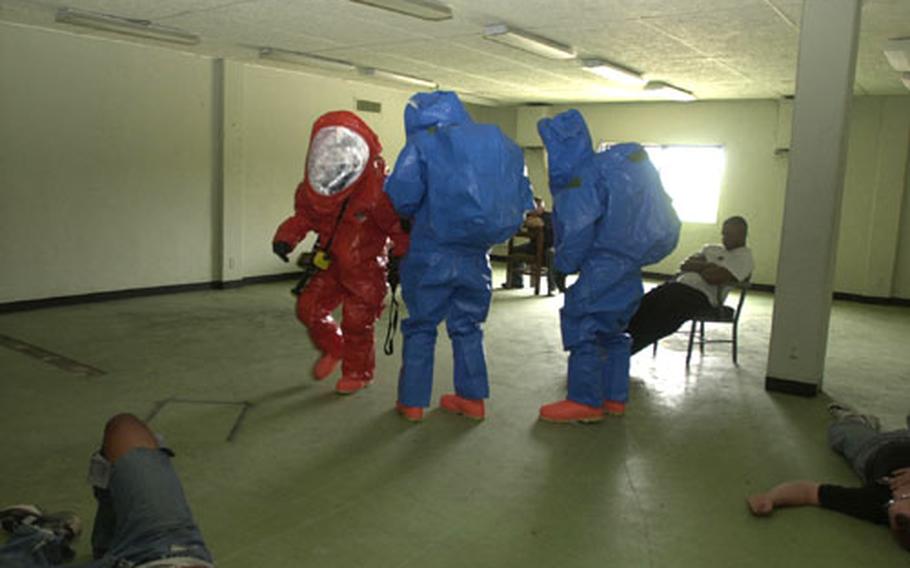 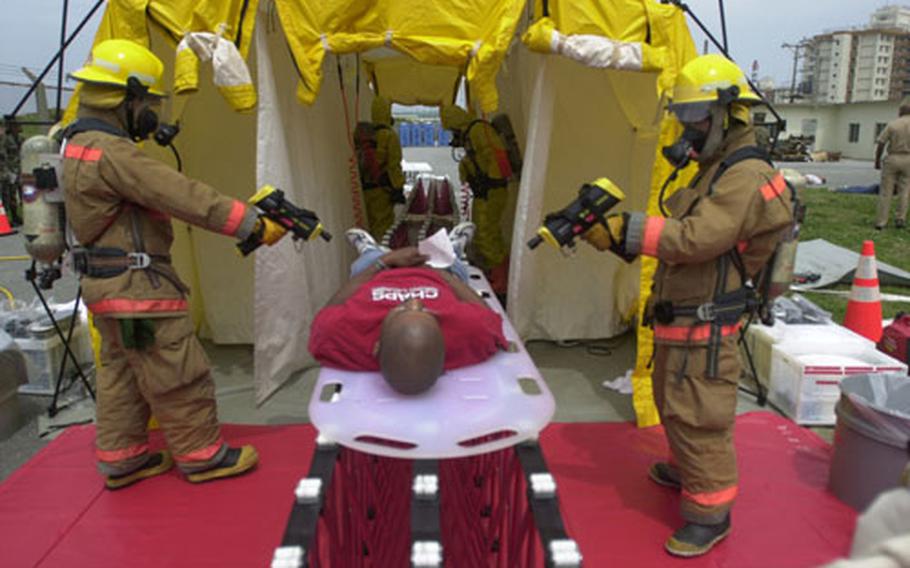 Firefighters use hand-held monitors and detectors to test for nerve and blister agents on a "victim" during a mass casualty drill on Camp Kinser on Thursday. (Fred Zimmerman / S&S)

CAMP KINSER, Okinawa &#8212; A bomb ripped through a tower-housing unit, killing and injuring more than 60 residents as an unknown weapon of mass destruction was unleashed.

Firefighters rolled onto the scene to find bodies scattered on the grounds outside the building and dazed and confused victims calling for their children.

While the scenario Thursday is a possibility, it was really just a mass-casualty exercise aimed at testing the preparedness of the base, firefighters, military police and the hospital, according to Mark Sileikis, assistant fire chief for fire prevention and education.

&#8220;This is a culmination of [hazardous material] training the fire department has done in the past year,&#8221; Sileikis said. &#8220;We have trained our [Master Labor Contract workers] to various levels of HazMat and spent thousands of dollars on new equipment. We&#8217;re getting the chance to put it all together.&#8221;

Sileikis said even the command structure was being drilled, noting the Emergency Operations Center on Camp Foster was activated and security measures were stepped up as if the event was real.

Once the call went out that a bomb had exploded, firefighters responded to the scene and quickly set up their decontamination site. Sileikis said the crew can get the site up in about 15 minutes.

Sileikis said the firefighters are cautious so they don&#8217;t add to the problem.

Once the decontamination site was ready and the firefighters in their safety gear, the walking wounded were directed to the first tent to begin the process. Several firefighter teams wearing totally self-contained Level A HazMat suits then entered the building to remove injured and dead.

After decontamination, &#8220;victims&#8221; then were categorized, and the most severe were flown to the U.S. Naval Hospital Okinawa by Marine Corps and Air Force helicopters. Those with less-severe injuries were transported by ambulance.

Upon arrival at the hospital, the injured were taken to a triage area and classified again. The most critical were taken directly into the emergency room or even the operating room for simulated treatment.

Exercises such as these are &#8220;important because we should always be ready for a potential disaster,&#8221; said Lt. Cmdr. Jeanmarie Jonston, department head for staff education and training at the hospital. &#8220;Preparation provides us the opportunity to hold patient safety as our highest priority. Also, the moulage simulates true casualties and if the health-care providers sense patients have life-threatening injuries, it enhances their training.&#8221;

One hospital staff member said the exercise helps prepare them for the battlefield.

&#8220;These exercises in force protection ensure competency to perform in a contingency environment,&#8221; said Cmdr. Joseph Werner, director for administration.

Sileikis echoed the sentiment that the exercise helps workers prepare for the worst.

Sileikis said there will be an even bigger mass-casualty exercise in July in which contractors are being brought in to grade the evolution and identify areas that need work.