A worker at the Corrosion Rehabilitation Facility sands the hood of a Humvee as it is being prepped for a new paint job. Last fiscal year the facility fixed up more than 1,500 pieces of equipment, saving the Marine Corps $7.5 million in shipping costs to the U.S. alone. (Fred Zimmerman / S&S)

A worker at the Corrosion Rehabilitation Facility sands the hood of a Humvee as it is being prepped for a new paint job. Last fiscal year the facility fixed up more than 1,500 pieces of equipment, saving the Marine Corps $7.5 million in shipping costs to the U.S. alone. (Fred Zimmerman / S&S) A worker at the Corrosion Rehabilitation Facility on Camp Kinser applies a base coat of green paint to a Humvee and portable water tank. The facility takes rust off of gear, repairs it and puts on new paint. (Fred Zimmerman / S&S) 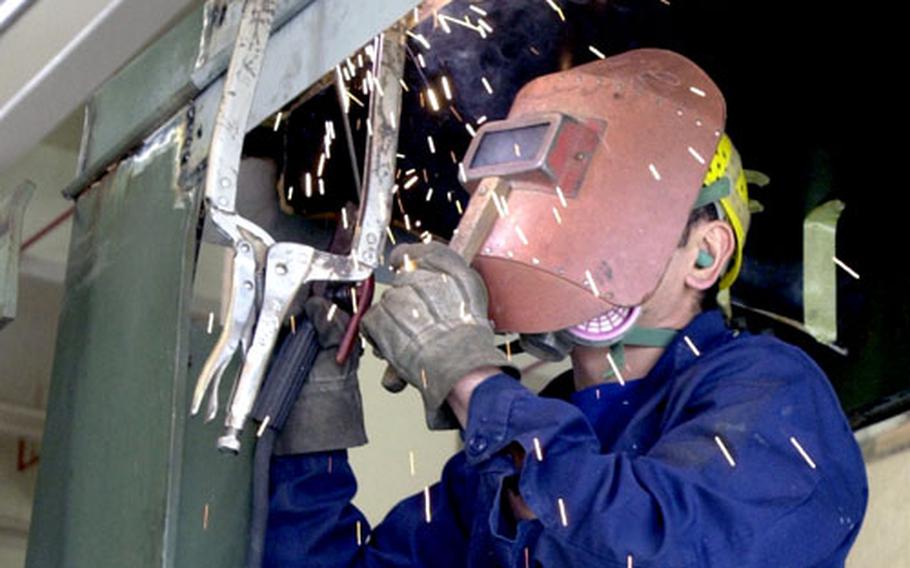 A local contracted worker at the Corrosion Rehabilitation Facility on Camp Kinser makes repairs to the cab of a 40-foot crane. (Fred Zimmerman / S&S)

CAMP KINSER, Okinawa &#8212; In with the old, out with the new: That&#8217;s the name of the game at the Corrosion Rehabilitation Facility here as they take in old, rusty, sometimes worn-out gear and make it like new again.

The shop, which falls under Marine Corps Base G-4 (Logistics), has been in existence since 1994, originally with a handful of Marines working there. In November 2004, six civilians took over operations, overseeing 38 contractor employees who perform the work, according to Bill Antell, Corrosion Rehabilitation Facility branch head.

Workers at the facility can refurbish everything from rifle racks and generators to 7-ton trucks and 40-foot cranes, Antell said.

When a piece of gear arrives at the facility, Antell said, the first step is to inspect the gear and write a contract for the work to be done. The item is steam-cleaned to get oil and dirt off and sandblasted to remove rust. If needed, the item is sent to the body repair shop. It doesn&#8217;t matter if it&#8217;s steel, aluminum or Fiberglass &#8212; Antell said they can fix it all.

Once repairs are complete, the item gets sanded by hand before being prepped for new paint. After a primer coat is applied, a green base coat is put on, Antell said. To complete the camouflage pattern, chalk outlines display where the black and brown paints should be applied according to regulations, and then it&#8217;s literally paint by numbers.

The last step is a full undercoating and a &#8220;corrosion inhibiting compound&#8221; on any area where metal meets metal, Antell said.

In addition to providing the ability to refurbish gear, the local facility helps the Marine Corps save money by eliminating costly shipping charges.

Another benefit of the rehabilitation facility is how quickly the gear is put back into service.

While the facility&#8217;s mission primarily is to repair III Marine Expeditionary Force equipment, Antell said it also does work on gear from other branches of service, on a reimbursable basis.

&#8220;By extending the service life of tactical equipment on island through corrosion control, CRF reduces the repair and transportation costs as well as time lines that would be required if the equipment had to return stateside,&#8221; Brantley said.

&#8220;Many years ago, Headquarters Marine Corps recognized the benefits and continues to support the program. While the Marine Corps on island enjoys the biggest return, other military services have taken advantage of the corrosion repair program by inducting equipment into the CRF.

&#8220;As long as there is tactical equipment deployed in a corrosive environment like Okinawa, there will always be a need for the CRF.&#8221;