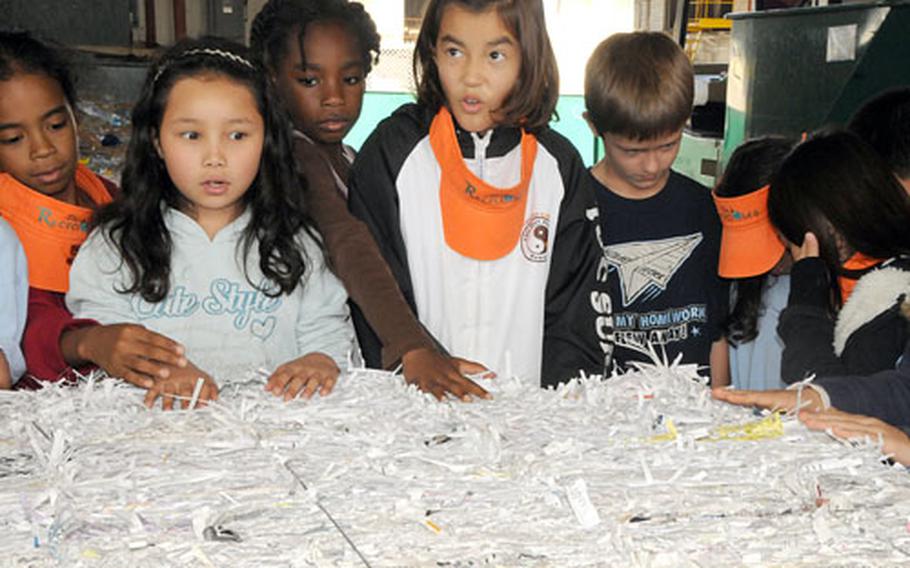 Third-graders from Kinser Elementary School, on Camp Kinser, Okinawa, listen in amazement as a worker at Friday at the Camp Foster Recycling Center tells them this block of shredded paper weighed 1,000 pounds. (Cindy Fisher / S&S)

Third-graders from Kinser Elementary School, on Camp Kinser, Okinawa, listen in amazement as a worker at Friday at the Camp Foster Recycling Center tells them this block of shredded paper weighed 1,000 pounds. (Cindy Fisher / S&S) Analyn Brito, left, and Akina Johnson, third-graders at Kinser Elementary School, cover their noses at the smell of the trash at Kurashiki Kankyo, a landfill in Okinawa City. Two Kiser classes visited the landfill to learn aboout what happens to garbage once it&#39;s thrown away on Okinawa. (Cindy Fisher / S&S) 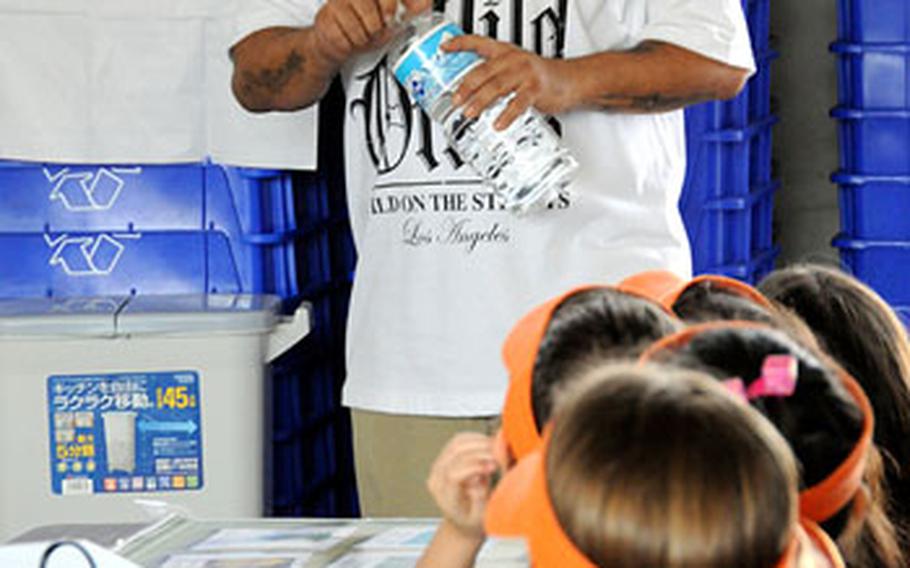 Jeff Strain, a Camp Foster Recycling Center worker, tells a group of third-graders from Kinser Elementary School that when they recycle plastic bottles, they should remove the caps, so center workers don&#39;t spend all day removing thousands of capss instead of doing other recycling work. (Cindy Fisher / S&S)

OKINAWA CITY, Okinawa &#8212; It was a stinky and garbage-filled day for two Camp Kinser third-grade classes Friday as they learned about recycling.

Alice Dickinson&#8217;s class collects all the recyclable material at Kinser Elementary School, and she wanted her students to see what happens to recyclables and where the rest of the trash goes.

Griselda Ready&#8217;s class tagged along for the learning experience.

Seeing the process will make recycling a reality for the two classes, Dickinson said.

The 33 students started with a tour of the Camp Foster Recycling Center. There, Jeff Strain, the center&#8217;s materials identification handler, told the children that landfill space on Okinawa is running out and part of the problem is that too many recyclable materials are being thrown away.

"In all reality, there isn&#8217;t a thing on this planet that isn&#8217;t recyclable," he said. Though the Foster facility can&#8217;t take everything, it does recycle items like cans, paper, cardboard, plastic, glass and scrap metal, Strain explained.

He hopes the students "will take this lesson home to their parents &#8230; and decrease the flow going to the landfill," Strain said.

The children also toured Kurashiki Kankyo, the off-base landfill in Okinawa City where trash from all U.S. bases is dumped.

"The landfill is pretty shocking when you see how much is there," Strain said of the mountains of trash at Kurashiki Kankyo.

Amid the stench and trash, the children listened with wrinkled noses as waste disposal workers explained what happens to the garbage.

Seeing how much recyclable stuff was in the trash surprised Akina Johnson, 9, and the other students.