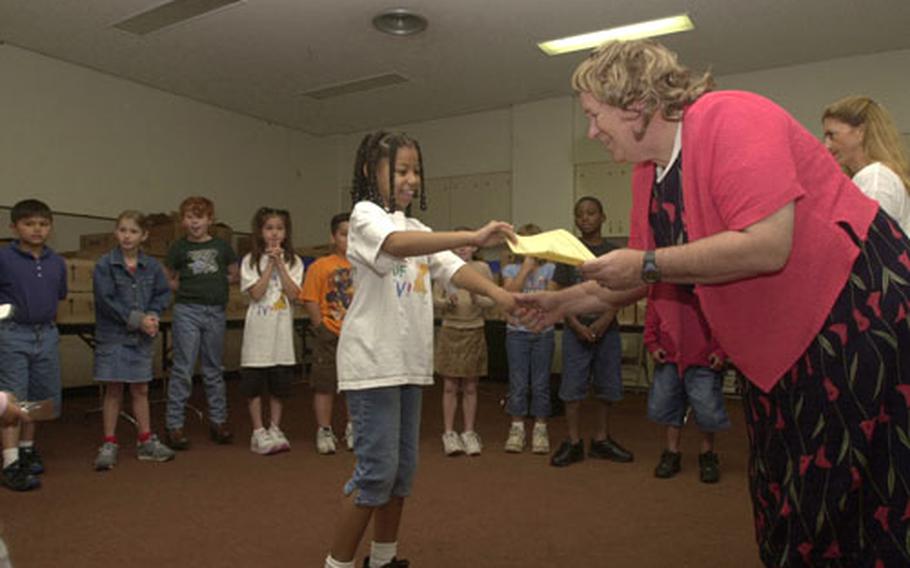 Kinser Elementary School Principal Bill Graham presents Jaren Buckson, a second-grader, with her certificate for not watching television during "turn off your TV week" April 19 to 25. Graham agreed to wear a dress and wig if students didn&#39;t watch any TV during the week, which more than 25 percent of the school&#39;s students did. (Fred Zimmerman / S&S)

CAMP KINSER, Okinawa &#8212; As students filed into an empty room at Kinser Elementary School on Wednesday morning, their facial expressions were almost identical: first confusion, followed by neck-snapping double takes. When they finally realized who was before them, they pointed and burst into laughter.

The reaction was warranted. After all, this was the first time the students had seen their principal, Bill Graham, in a dress.

Graham slid into the dress, complete with sweater and wig, because he lost a bet. For the April 19-25 TV-Turnoff Week, Graham originally pledged that if 500 of the more than 600 students turned off their televisions for the entire week, he&#8217;d don women&#8217;s clothing for a day. More than 140 students stepped up and completed the challenge, so Graham didn&#8217;t have to wear the dress all day but said he still wanted to make good on his bet for the students who held up their end of the deal.

Grade by grade, students who completed the challenge met with Graham and his dress to receive certificates, and have cookies and juice. During the brief ceremonies, Graham would ask students if they thought he was pretty.

Most students were blunt and told him he didn&#8217;t look good in women&#8217;s clothes; others humored him and said he looked nice.

Graham said that when approached about the dare, he asked about doing something as simple as getting a high-and-tight haircut, but the bet organizer, reading recovery teacher Barbara Treadway, convinced him the dress would attract more participants.

Treadway said she wanted to boost participation in TV-Turnoff Week after receiving a flyer in her in-box. She admitted that she got the idea for Graham wearing the dress from schools in the States that have done the same thing.

While it turned into a fun event, Treadway said most of the students realized they could have a good time without watching television.

For second-grader Jaren Buckson, playing with her sister and going to the park helped keep her week occupied.

Treadway said some students have said they no longer watch television during the week but instead play games or do other activities with their families.

Graham said he didn&#8217;t mind despite the embarrassment.