Kingpins: American and Japanese base workers moonlight as professional bowlers 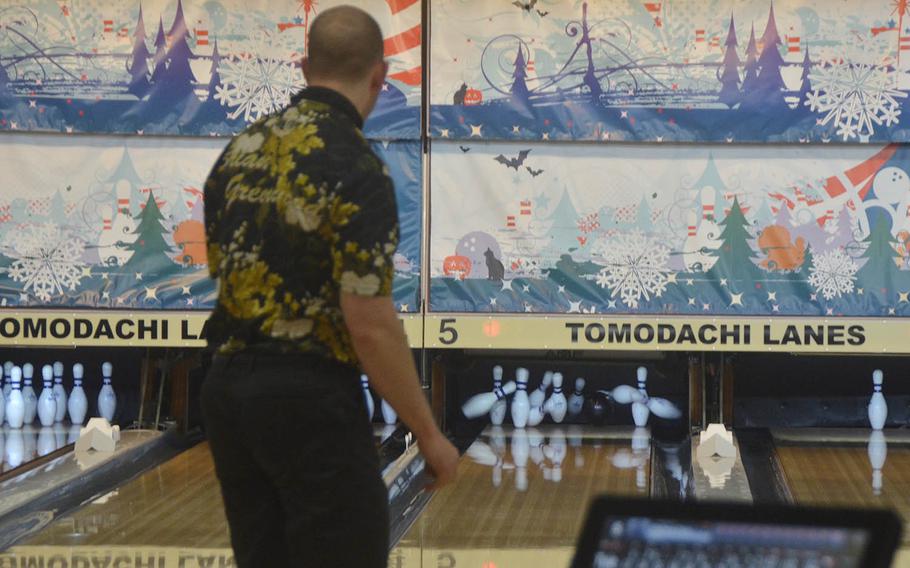 Buy Photo
Brian Greenwood, a member of the Japan Professional Bowling Association, bowls a strike at the Yokota Air Base lanes on Feb. 6, 2019. (Allen Onstott/Stars and Stripes)

Buy Photo
Brian Greenwood, a member of the Japan Professional Bowling Association, bowls a strike at the Yokota Air Base lanes on Feb. 6, 2019. (Allen Onstott/Stars and Stripes) 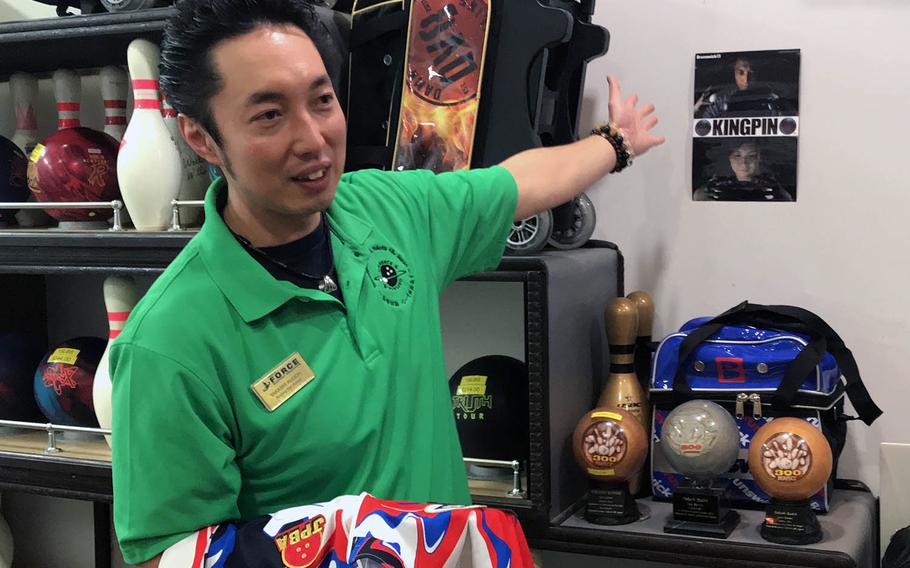 Buy Photo
Takashi Kudoh, shown here Feb. 12, 2019, at Tomodachi Lanes at Yokota Air Base, Japan, runs a pro shop there that includes memorabilia such as a signed bowling poster with his photograph on it. (Allen Onstott/Stars and Stripes)

YOKOTA AIR BASE, Japan — A pair of professional bowlers — one Japanese and one American — are regulars at Tomodachi Lanes, the on-base bowling center at the home of U.S. Forces Japan in western Tokyo.

Takashi Kudoh, who works at the bowling alley, and Brian Greenwood, a student account specialist at University of Maryland University College’s Yokota campus, have a healthy rivalry as fellow members of the Japan Professional Bowling Association.

The pair, who play about nine tournaments each year, recently competed in the Kuwata Cup — a televised tournament in central Tokyo — for a total purse of more than $50,000.

Kudoh has bowled professionally in Japan since 2003 and Greenwood joined him in 2015.

To become Japanese professionals the pair had to pass a rigorous test held yearly in April and May that involves bowling dozens of games in Tokyo and Osaka and averaging over 200 points per game.

“Those averaging below 190 after Day Two are not welcomed back,” Greenwood said.

Each morning during the test, which takes several days, bowlers formally greet officials who check their uniforms. The bowlers study rules, the history of the sport and sports nutrition and do a five-day etiquette class. Finally, there is a written exam in Japanese.

“As a foreigner who has extensively studied Japanese it was still a challenge but, fortunately, I passed,” Greenwood said. “We all received our red JPBA patch and certificate.”

Japanese bowling is a lot stricter than the American sport, he said.

“Japanese will dress up more appropriately and have more of their own equipment,” Greenwood said. “You don’t see beers being downed at Japanese centers, [but] both sides are competitive, and both sides are there to have fun.”

The American first saw the sport on television when he was a child. These days he tries to emulate Professional Bowling Association hall-of-famer Chris Barnes, he said.

“His bowling IQ and knowing what, where and when to throw a specific ball is something I try to aspire to,” he said.

Kudoh said he’s been bowling on U.S. military bases since he was young, and recalled childhood trips to Camp Zama and Naval Air Facility Atsugi in Kanagawa prefecture to bowl with a friend.

“I yearned for powerful and star-quality bowling while I bowled with Americans,” said Kudoh, who has traveled to the U.S. over the years to attend bowling classes and compete in a tournament.

“I have achieved the same level speed and the number of rotations as American bowlers, so my bowling is much more powerful compared to Japanese bowlers,” he said.

The pro shop Kudoh runs at Tomodachi Lanes includes memorabilia such as engraved bowling bowls, a signed bowling poster with his photograph on it and an impressive collection of trophies.

“I want to spread the fun of bowling in the U.S. and Japan,” he said. “I want to do my best as a professional, so people will enjoy bowling and for them to enjoy watching me bowl.”