King of the road? Soldiers dig the MRAP 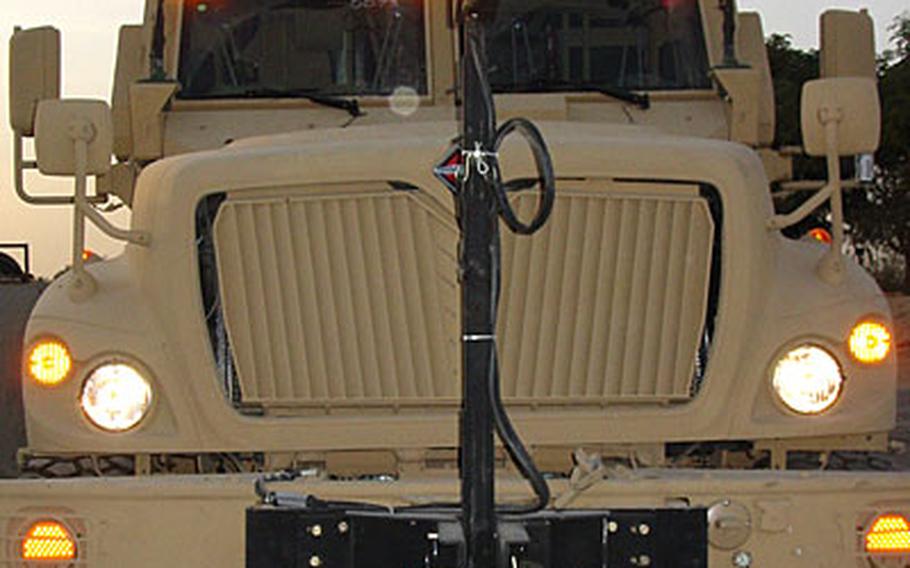 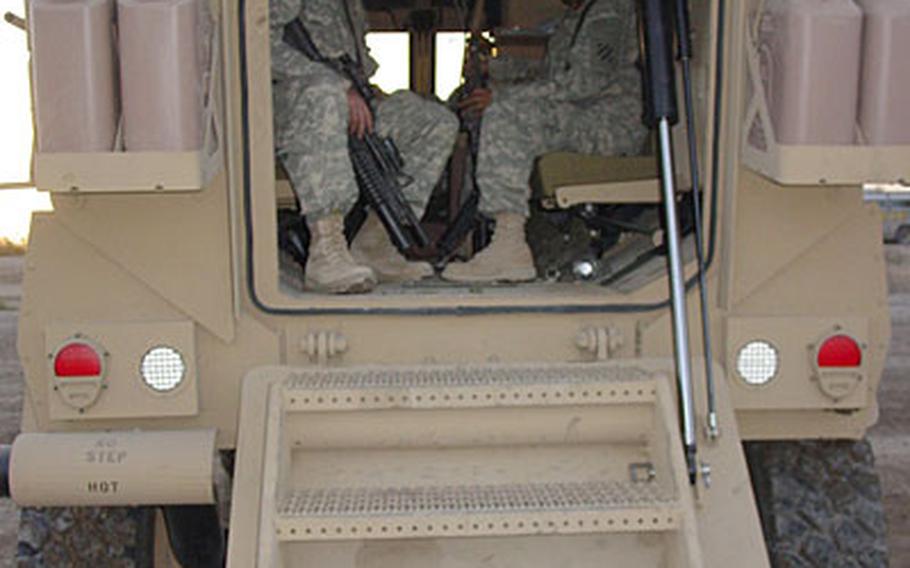 A pair of soldiers inside a new Mine-Resistant Ambush Protected (MRAP) vehicle at Camp Liberty in Baghdad. (Scott Schonauer / S&S) 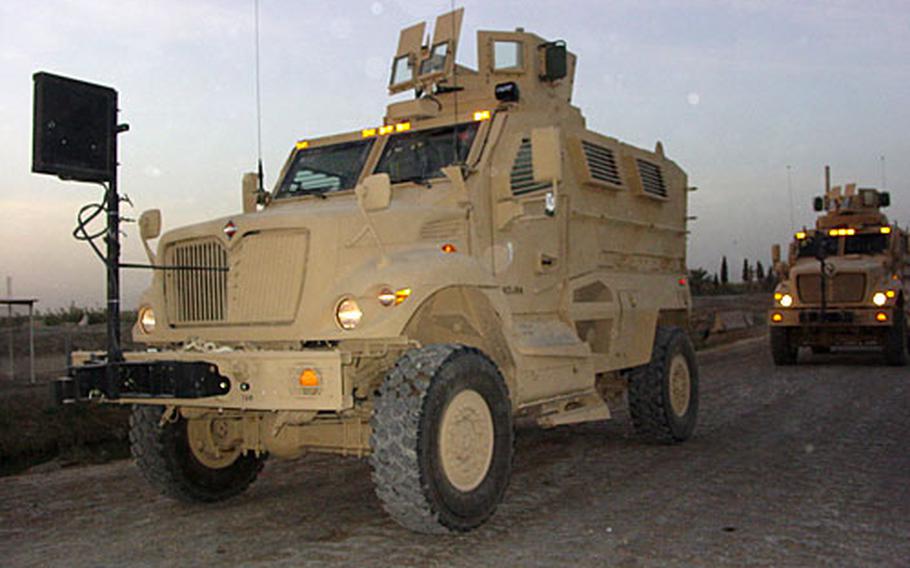 A convoy of new Mine-Resistant Ambush Protected (MRAP) vehicles drives along a dirt road at Camp Liberty in Baghdad after a training class. (Scott Schonauer / S&S)

BAGHDAD &#8212; As the convoy rumbles down the dust-and-gravel road on Camp Liberty, heads turn and cars stop. Some people whip out digital cameras to steal a snapshot, while others strain their necks to get a glimpse.

Among military machines, the new MRAP &#8212; a Mine Resistant Ambush Protected vehicle &#8212; is a celebrity and everybody wants a look.

For soldiers in Iraq, there is little debate. All who venture outside the base wire want the behemoth of rolling armor for their unit.

Safety is the main reason. Roadside bombs have been the biggest killer in Iraq, and the MRAPs were designed to protect troops from them. So far, nobody driving an MRAP in Iraq has been killed by a makeshift bomb.

Sgt. David Morris, a member of the 3rd Infantry Division&#8217;s 1st Battalion, 30th Infantry, was among a group of soldiers going through an MRAP driving course last week. The added protection is important, he said, but he also digs the versatility.

Units in the most dangerous areas are getting the MRAPs first.

The first vehicles arrived by cargo plane last month at Camp Liberty, and the military hopes to have 1,500 of them in Iraq by the end of the year.

Drivers and mechanics must take a weeklong, 40-hour course involving classwork and plenty of hands-on training. It&#8217;s a quick course to get them used to what it&#8217;s like to get behind the wheel.

Robert Martinez, a civilian who is the MRAP training leader, said soldiers are being trained as quickly as possible.

To foster competition and speed up delivery, various companies are producing the MRAPs using different specifications.

The batch arriving the past few weeks was built by International Military and Government, LCC, and comes in two categories:

Category 1 vehicles cost about $650,000 each, have two axles, weigh about 19 tons, can carry up to six people and will replace the Humvee.

What soldiers often notice first when they see an MRAP is how both types tower over Humvees. It requires a bit of an adjustment. Because of the height and the extra armor, there are more blind spots that need to be considered.

Drivers also have to scale two steps before climbing into the seat, but the doors are a cinch. While armored Humvee doors require a strong push and pull to open and close, the MRAP doors are pneumatic and are so easy to open they can be done with a couple of fingers.

Inside, the dashboard is a cross between a big-rig truck and an airplane cockpit. Everything is run by a computer, and the transmission is automatic. To shift from neutral to drive, the operator simply pushes a button.

Soldiers compare driving it to the ease of a car. Each has power steering, and the air brakes can stop the vehicles on dirt quickly.

The pressurized cabin is spacious, with enough room for four soldiers and their gear. The seats hang from the side facing inward.

But the highlight of the design is how it can protect troops from a roadside bomb. The key is its V-shaped hull, which deflects the impact of the bomb outward, similar to the way a boat cuts through water.

Safety features also protect against fire, inside and out. Even if the tires catch fire, the system is designed to put it out.

Critics say the MRAPs consume more fuel than Humvees and are more expensive. They also cannot withstand explosively formed penetrators, a type of directional roadside bomb that has proved to be effective even against tanks.

For soldiers, the benefit of knowing they have a greater chance of surviving is what&#8217;s most important.

Safer from roadside bombs and ambushes.Roomy interior built with soldiers&#8217; gear in mind and room to spare.Easy to drive and user-friendly.Quieter than Bradley fighting vehicles and some of the older Humvees.Seats face inward to make communication easier.Easy-to-open pneumatic doors and back hatch.Interior is neatly organized.What soldiers don&#8217;t like

Difficult to fit an injured soldier on a stretcher in the smaller models.Lack of exterior lighting.Height makes it difficult to load and unload equipment out the back.Difficult to tie down equipment that may move around.There are more blind spots for drivers.Have you been on patrol in an MRAP? What did you like and what would you change? E-mail your comments, along with your name and unit, to news@estripes.osd.mil.