King of Pop calms the crowds during Haiti aid mission 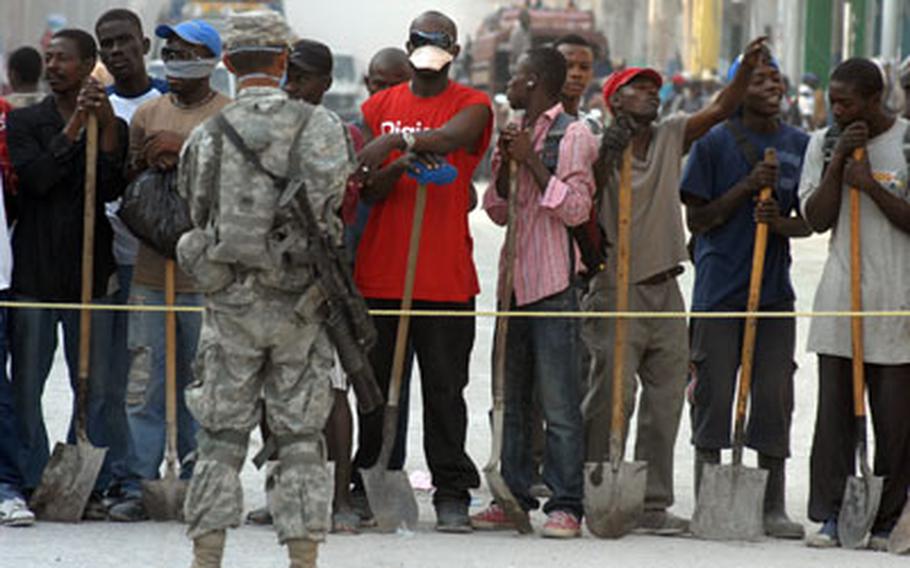 Soldiers working with the 82nd Airborne Division in Port-au-Prince are using Jackson&#8217;s music along with other American and Haitian pop songs to calm crowds during aid distribution missions.

One of the soldiers, Spc. Max &#8212; commanders asked that the last names of soldiers in the unit not be disclosed because of the nature of their jobs &#8212; said he hit upon the idea of using music for crowd control during an aid distribution mission last month.

The Haitians were trying to push ahead in line for aid,&#8221; he said.

Max said his unit told Army leaders in Haiti about the effectiveness of music for crowd control and that its use is spreading.

&#8220;We went to another food distribution recently and some Brazilians (soldiers) showed up and they started playing music,&#8221;&#8221;he said.

When the troops played Haitian hip-hop star Wyclef Jean&#8217;s &#8220;The Sweetest Girl&#8221; through speakers mounted on the roof of a Humvee during a mission last week, Haitians responded by singing along and dancing.

&#8220;We play Akon, Wyclef Jean and Bob Marley and we were lucky enough to get some Haitian music from [a soldier who is a Haitian linguist],&#8221; Max said.

Another soldier, Spc. Anthony, said he&#8217;s heard plenty of Haitian pop since he came to Port-au-Prince.

Max doesn&#8217;t even bother to play the 1990s alternative music that makes up the bulk of songs on his iPod.

Michael Jackson songs are, by far, the most popular with crowds, Max said. The Haitians try to mimic Michael Jackson&#8217;s dance moves and incorporate some hip-hop steps, he said.

The linguist, who grew up in Haiti before moving to the U.S. at 19, said Port-au-Prince had many nightclubs when he lived there in the 1980s, and even after-school music clubs for kids.

U.S. Navy commander Michele Hancock, a medical plans and operations specialist who deployed to Haiti the day after the earthquake, said one of her enduring memories of the deployment will be the voices of women singing in a remote village at night.

&#8220;That is how they express their grief,&#8221; she said, adding that patients she saw being treated at U.S. facilities often sang when they were in pain.

The soldiers&#8217; use of music in Haiti contrasts with the reported use of loud music to make detainees uncomfortable in Iraq in recent years.

Max said he doesn&#8217;t know if the way his unit has used music in Haiti could transfer to Iraq or Afghanistan but, he said, &#8220;I think on humanitarian aid missions where people have to do crowd control it would definitely be useful.&#8221;