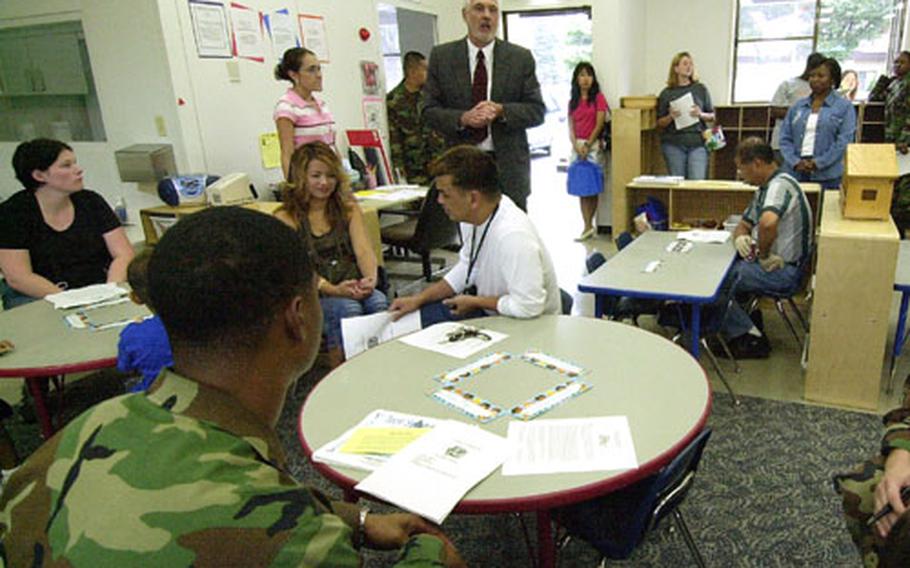 YOKOTA AIR BASE, Japan &#8212; Yokota&#8217;s kindergartners are about to tackle one of life&#8217;s most exciting, yet intimidating moments: the all-important first day of school.

To ease the transition, base officials have built a pair of spiffy, brand new buildings for them &#8212; additions to Yokota East and Yokota West elementary schools that feature self-contained bathrooms, kitchen units, extra storage and magnetic walls on all sides.

They&#8217;re to move in Tuesday, eight days later than other students around the Pacific, following a week of home visits by teachers and orientation sessions with parents inside the new facilities. Yokota East will welcome five kindergarten classes; Yokota West is to usher in three. Both have an extra vacant room at their disposal.

&#8220;They were designed especially for kindergarten classes,&#8221; said Yokota West principal Lee Kirsch. &#8220;These were built to bring us up to standard with larger classrooms. As a byproduct, it will alleviate overcrowding. Any time you can get four to six new classrooms, it&#8217;s a breath of fresh air.&#8221;

The new structures, which totaled about $3 million, are the direct result of a Defense Department mandate in the late 1990s to implement a full-day kindergarten program and reduce the teacher-pupil ratio in grades 1-3 from 23 to 18 students, officials said.

The initiative was phased in slowly on military installations around the world.

&#8220;Facilities were a major handicap for many communities,&#8221; Kirsch said. &#8220;This gives us the facilities to implement the program fully. It helps us across the board. ... This gives us room to expand. It gets us out of closets for offices and frees up space from old rooms that were used for kindergarten classes.

The additions are nothing like the trailers typically used in the United States to ease overcrowding in schools.

They have all the requirements to meet the DOD mandate, Kirsch said, including toilets, doors connecting various classrooms for group activities, cooking facilities, age-appropriate play areas and larger space.

&#8220;Oftentimes, they had to work in substandard square footage,&#8221; he said. &#8220;Now, it&#8217;s all within classroom operations. That cuts down significantly on the amount of time teachers need to take students to the bathroom or shift classes to a kitchen facility.&#8221;

&#8220;The new kindergarten building is a wonderful structure to house our students,&#8221; she said. &#8220;For the first time in many years, all kindergarten classes will be contained in one building. This enables the teachers to collaborate more closely for better teaching.&#8221;

The U.S. military funded part of the mandate early on in an effort to launch a full day of school for kindergarteners, he said. Now, it&#8217;s paid entirely by Department of Defense Dependents Schools.

Yokota schools have conducted a full day of kindergarten instruction since 2002, said Raymond Kishaba, resident engineer for the Japan District&#8217;s U.S. Army Corps of Engineers. &#8220;It took a while to get the funding for the initial facilities,&#8221; he added.

The contract was awarded to the OHKI Corporation a year ago, Kishaba said, and construction ended Aug. 16.

&#8220;We&#8217;ll get four to five years of use in the temporary buildings,&#8221; Kishaba added. &#8220;The GOJ facilities-improvement procedure is quite a long process and we were able to develop an interim solution. The buildings are temporary, and can be disassembled and moved, but they meet all the safety, functionality and durability requirements the children deserve.&#8221;

Officials say the permanent buildings will provide educators and students with even more features, such as additional computers, art facilities and a preschool disabilities classroom.

At this point, however, it&#8217;s the temporary setups that are drawing rave reviews from teachers.