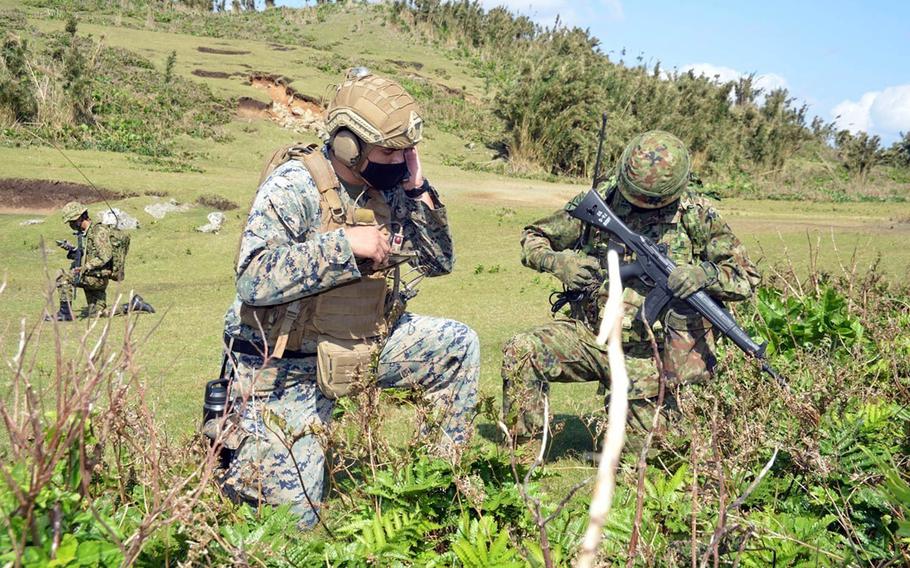 TOKYO — A Marine who says he is the great grandnephew of country music legend Johnny Cash recently led a force that stormed an island alongside troops from Japan’s new amphibious brigade.

One hundred and fifty Marines participating in the 11-day Keen Sword exercise launched Sunday in small boats from the dock landing ship USS Ashland to Gajajima, an island about 270 miles northeast of Okinawa. There, they linked up with 100 Japanese troops and a small contingent of Marines on who’d arrived two days earlier in CH-47 Chinook helicopters and MV-22 Osprey tiltrotor aircraft.

“With amphibious operations, imagery can only tell you so much and the lay of the land is completely different,” the young officer told Stars and Stripes in a phone interview Wednesday. His famous relative, a former airman, was one of country music’s biggest stars, responsible for hits like “I Walk the Line” and “Ring of Fire.”

There wasn’t time for singing Sunday as Cash, whose personal favorites include “A Boy Named Sue” and “I Still Miss Someone,” led his Marines to Gajajima in small boats.

The Marines had to navigate shallow coastal water to get to shore. Once they were on dry land, they found themselves slogging across uneven terrain through dense jungle, Cash said.

“Most of us had never experienced something quite like that before,” he said.

The platoon, which has been on Okinawa since June as part of the unit deployment program, has practiced amphibious operations before but this was the first time working alongside their Japanese allies, Cash said.

The Devil Dogs’ World War II island-hopping exploits were in the back of the modern-day Marines’ minds during the training, he added.

“A lot of the Marines talked about the last time someone did something like this [in a real-world operation] was in World War II,” Cash said.

In comments from the deck of the JS Kaga helicopter destroyer to kick off the exercise on Oct. 26, U.S. Forces Japan commander Lt. Gen. Kevin Schneider talked about the troops’ ability to deploy rapidly to defend remote Japanese-administered islands in the East China Sea that are also claimed by Taiwan and China.

The Senkaku islands are surrounded by natural resources including fish, oil and gas.

Training on Gajajima over two days gave the Marines confidence that they could work with their Japanese allies on future amphibious operations, Cash said.

“Any island that we are thinking about we should have a good deal of success working with the Japanese,” he said.

The Japanese amphibious troops looked like they had been capturing islands for some time, Cash added.

“Seeing their structure and how they conduct themselves, it was really impressive and gave us confidence going forward,” he said. “We knew we can work with these guys.”

The platoon focused on infantry tactics but there are personnel involved in Keen Sword focused on multi-domain operations, Cash said. Such operations encompass things such as cyberspace and space operations.

“Their gear was on par with our gear,” he said. “Their camouflage made them look like they were part of the island.”