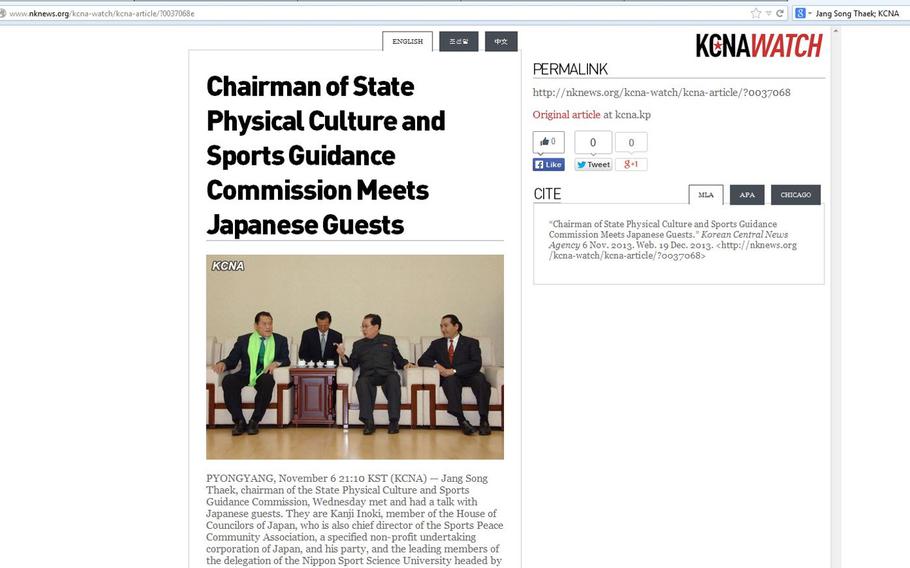 The website KCNA Watch keeps track of information coming out of North Korea through it's state-run news agency. This screengrab shows the last KCNA report mentioning Kim Jong Un's uncle, Jang Song Thaek. Now, a search on the KCNA website for Jang produces only one result, the Dec. 12 news that Jang had been labeled a traitor and executed. ()

Kim Jong Un’s uncle and former mentor, Jang Song Thaek, has not only been executed, but it appears that North Korea is trying to erase every trace of him.

Media in the reclusive country have been purging every reference they have to Jang — more than 100,000 documents and photos — from the Internet, according to a New Zealand hacker who has been tracking North Korea’s online activities for the past eight months.

The hacker — who goes by the pseudonym Frank Feinstein — tweets regularly about North Korea under the account @KCNAWatch. KCNA is Pyongyang’s official Korean Central News Agency. He also archives documents and photos that have been posted on five North Korean websites and leases his work to the Washington-based news agency NKNews.

A few days after North Korea executed Jang on Dec. 8 for alleged corruption, drug use, gambling and other “anti-state” acts, Feinstein noticed items disappearing from the websites.

More than 35,000 articles posted by KCNA have been altered to remove Jang’s name or deleted entirely. Translations in English, Spanish, Chinese and Japanese have also been altered or deleted. And 20,000 more articles have vanished from the archives of North Korea’s Rodong Sinmun newspaper, he said.

“Orwellian is a phrase that’s overused, but this is straight out of [George Orwell’s science fiction novel] ‘1984,’ ” Feinstein said.

“North Koreans aren’t just communists, they are Stalinists — meaning complete control of thought and very strong propaganda to their own people including on things past. So I’m not surprised,” said Michael O’Hanlon of the Brookings Institution.

The practice started with Stalin, said Andrew Krepinevich, president of the Center for Strategic and Budgetary Assessments.

“As other Soviet leaders were purged by Stalin, they suddenly ‘disappeared’ from photos,” Krepinevich said in an email. “Kim Jong Un’s actions are consistent with those of other totalitarian rulers in modern times, expanded to include the Internet. The Communist’s purpose is Orwellian — to wipe his uncle and the memory of the person off the face of the Earth. Anything positive written in newspapers, posted on the Internet, etc, about his uncle is ‘erased.’ ”

The last official photograph and news release featuring Jang — a Nov. 6 story about his meeting with a Japanese wrestler in his role as chairman of the State Physical Culture and Sports Guidance Commission – has disappeared from the KCNA website.

“They will be removing anything that references him from newspapers from now on,” Feinstein said. “You will never see a picture of Jang again [in North Korean official media].”

A search for Jang on KCNA’s website turns up only one article, dated Dec. 12, 2013. The title of the article is, “Traitor Jang Song Thaek Executed.”

North Korea blocks search engines from automatically archiving documents posted on its official websites, which is one reason why the hacker built his own archive, he said.

Japanese and South Korean intelligence agencies likely have their own archives of redacted North Korean stories, he added.

In the book, “The Real North Korea,” Andrei Lankov, a professor at Seoul’s Kookmin University who spent time in Pyongyang during the Soviet era, wrote that “authorities [in the 1980s] took care to isolate the populace not only from the foreign media but also from the official publications of earlier years.”

North Korean publications on social and political topics were often removed from libraries and could be viewed only with special permission, he wrote.

“This rule was obviously introduced to ensure that the changes in the policy line of the regime would remain unnoticeable to the populace,” he wrote.

It’s not a surprise that something similar is happening online, Feinstein said.

“For them, it is as simple as hitting the delete button, but it is easier to catch them doing it, too,” he said.

The U.S. government, which prevents its employees from accessing certain online content such as the wikileaks website, for example, wouldn’t be able to remove a person from the Internet, even if it wanted to, Feinstein said.

“The press (in America) is too open,” he said. “The only reason North Korea can do it is because their Internet presence is so small and government-controlled.”