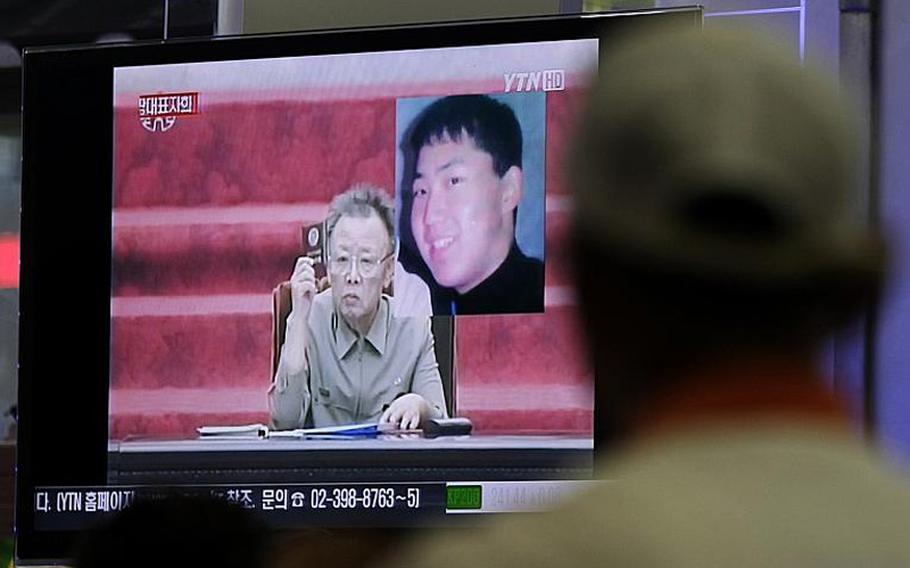 A South Korean man in Seoul watches a TV news program showing North Korean leader Kim Jong Il on Tuesday. North Korea's absolute leader Kim appointed his youngest son as an army general, giving the son his first known official title in an apparent sign that he is being groomed as the country's next leader. South Korean media said a portrait at top right in the screen is Kim's youngest son Kim Jong Un. (Ahn Young-joon/AP)

SEOUL &mdash; As the world awaits a glimpse of the man widely expected to be North Korea&rsquo;s future leader, attention is equally focused on his ailing father &mdash; dictator Kim Jong Il &mdash; whose health, or more specifically, the timing of his death, will ultimately decide whether his son succeeds or fails, experts say.

North Korea began a rare meeting of its Workers&rsquo; Party on Tuesday, the first political meeting since Kim Jong Il was named 30 years ago as heir to his father&rsquo;s supreme leadership role, eventually taking power in 1994. North Korea&rsquo;s Central News Agency announced early Tuesday morning that his son, Kim Jong Un, had been promoted to general.

The move is believed to be the first step toward cementing plans for the younger Kim to succeed his father and become the third generation in the Kim dynasty to lead the communist nation. But unlike his father, who rose through party and military ranks over the course of more than two decades, Kim Jong Un is being ushered to power quickly because of his father&rsquo;s illnesses, which include a reported stroke in 2008 and possible kidney problems.

Kim Jong Un will not have the luxury of time his father, now 68, had to build a loyal base among North Korea&rsquo;s military and political elite.

&ldquo;He has his power right now only because his father says he does,&rdquo; said Bruce Bechtol, a North Korea analyst, author and an associate professor at Angelo State University in Texas. &ldquo;He has to get his power base built up faster before his father dies so he has people who are loyal to him.&rdquo;

Little is known about Kim Jong Un, other than he is Kim Jong Il&rsquo;s third son, is believed to be 27 or 28, and likely attended a Swiss boarding school and Kim Il Sung University, named after his late grandfather and North Korea&rsquo;s founder.

People inside North Korea say he studied physics and was made a military officer, although he is not believed to have served in the military, according to Ha Tae-kyeong of Seoul-based Open Radio for North Korea, which maintains a network of dozens of informants inside the country. No known photos exist of Kim Jong Un as an adult.

Paik Hak-soon, of the Sejong Institute in Seoul, said Kim Jong Un&rsquo;s first official title as &ldquo;general&rdquo; shows that the country will continue to follow a military-first policy, and that the younger Kim &mdash; who has been carefully groomed and vetted for the position &mdash; is unlikely to deviate from his father&rsquo;s policies.

The elder Kim will continue to exercise power as long as he is able, but knows he will lose ground once his son is elected to senior party positions, Paik said.

&ldquo;The incumbent leader is always afraid of being a lame duck and that is no exception in the case of North Korea,&rdquo; he said. &ldquo;There is no way of overcoming the lame duck phenomenon, but giving power to his son, that is the safest way [to maintain power] they can think of.&rdquo;

Kim Jong Il&rsquo;s sister and confidante Kim Kyong Hui was also named a general on Tuesday, one of five people promoted to the rank in addition to Kim Jong Un. Analysts say she, along with her husband &mdash; Jang Song Thaek, vice chairman of the National Defense Commission &mdash; will likely act as an advisor to the younger Kim when he assumes full power.

Ha, of Open Radio for North Korea, said North Koreans were told Tuesday to watch a special live television broadcast at 11 a.m. That broadcast was delayed until 2 p.m., when an announcement was made that Kim Jong Il had been re-elected as general secretary of the Workers&rsquo; Party, a position he already holds.

&ldquo;The special announcement was not so special,&rdquo; Ha said through an interpreter.

Live broadcasts typically occur only when Kim Jong Il will be speaking, and his failure to appear likely means that he was ill, Ha said.

Ha, speaking Tuesday to reporters at the Seoul Foreign Correspondents Club, claimed Kim Jong Un has quickly assumed most of the day-to-day responsibilities of running the country, and played key roles in ordering the failed currency reform in late 2009, July 2009 cyberattacks on South Korean websites and the March torpedo attack on the South Korean warship Cheonan.

North Korea has publicly and vehemently denied involvement in the sinking.

Ha believes Kim Jong Un is unlikely to allow reforms to the isolated country&rsquo;s economy because it could destabilize the regime. Instead, the younger Kim would try to strengthen his weak power base by instigating conflicts outside the country&rsquo;s borders.

But for now, he and other analysts say North Korea remains stable and father and son are in no danger of losing power.

&ldquo;The country is stable as long as Kim Jong Il is alive,&rdquo; Bechtol said. &ldquo;When he dies, all bets are off.&rdquo;