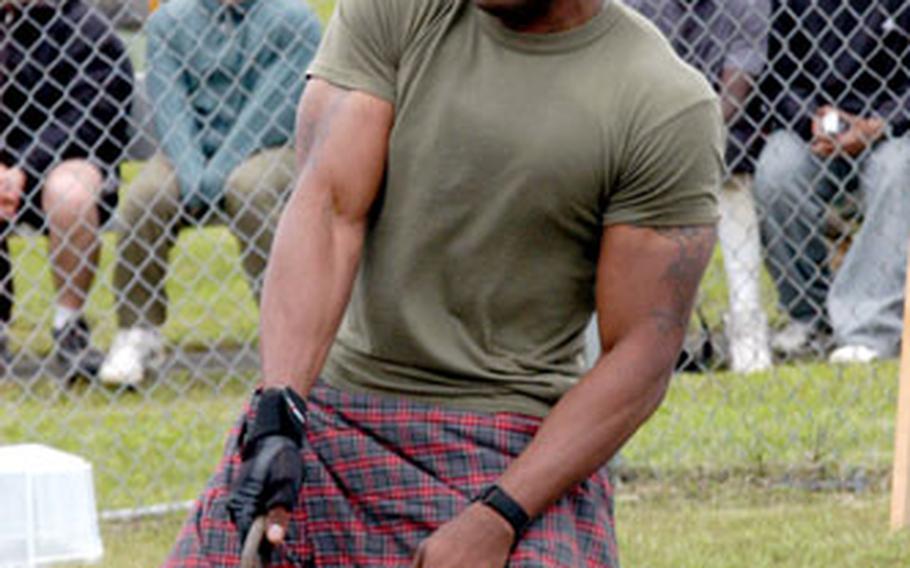 Marine Sgt. Trentice Shields prepares to heave a 46-pound mace-like object over a bar several feet above his head during the “weight for height” event at the Camp Fuji Scottish Highland Games on Friday. (Vince Little / S&S) 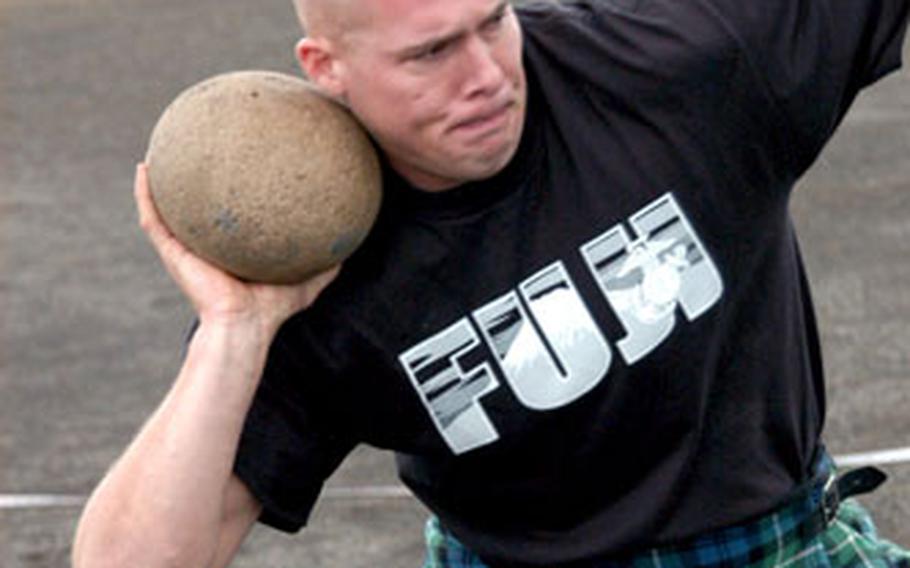 Cpl. Ryan Fraiser prepares to toss a 22-pound rock during the “putting the stone” contest at the Camp Fuji Scottish Highland Games on Firday. Fraiser dominated the throwing events in the heavyweight division. (Vince Little / S&S) With Mount Fuji as a backdrop, a Japanese performer in Scottish garb plays the bagpipes Friday at the inaugural Camp Fuji Highland Games. (Vince Little / S&S)

Welcome to the inaugural Camp Fuji Highland Games, an event steeped in Gaelic traditions that featured a 35-pound hammer throw, a caber toss using a 100-pound tree trunk and &#8220;kilted&#8221; mile relay. And ye cannah leave out the &#8220;putting the stone&#8221; contest &#8212; similar to the shot put but carried out with a 22-pound rock from Scotland &#8212; and a &#8220;weight for height&#8221; showdown in which competitors had to heave a 46-pound mace-like object over a bar several feet above their heads.

With bagpipes playing all day in the background, Fuji units also locked up Friday in soccer, wrestling and a tug-of-war.

Even the weather was Scottish &#8212; cool and windy, with gray clouds offering only an occasional glimpse of majestic Mount Fuji, still capped with snow.

Col. J.J. Tabak, Camp Fuji&#8217;s commander, came up with the idea to stage the games, according to Petty Officer 1st Class Stephen Royall, the senior medical department representative at the base health clinic, who was a key organizer along with Marine Corps Community Services.

&#8220;The Scottish started it as a way to get everybody in the community involved,&#8221; said Royall, who&#8217;s competed in Scottish Highland sports before. &#8220;For Marines new to Japan and maybe away from the States for the first time, this opens up their eyes to a lot more than Camp Fuji.&#8221;

The Marines and sailors even talked a little smack in the days leading up to the games, Royall said.

Maj. Darin Morris, Camp Fuji&#8217;s executive officer, said organizers might expand the Highland Games next year to include other U.S. bases on the Kanto Plain. A contingent from Itazuma Garrison, a Japan Ground Self-Defense Force installation next to Fuji, took part in soccer, wrestling and the kilted run Friday morning.

The Japan Scottish Highland Games Society, which will hold its games this fall in Tokyo, provided Camp Fuji with the proper equipment for Friday&#8217;s event, Royall said.

Lance Cpl. Aaron Burton of Headquarters Battalion Camp Fuji is among a handful of Marines who can clear 13 feet in the &#8220;weight for height&#8221; event.