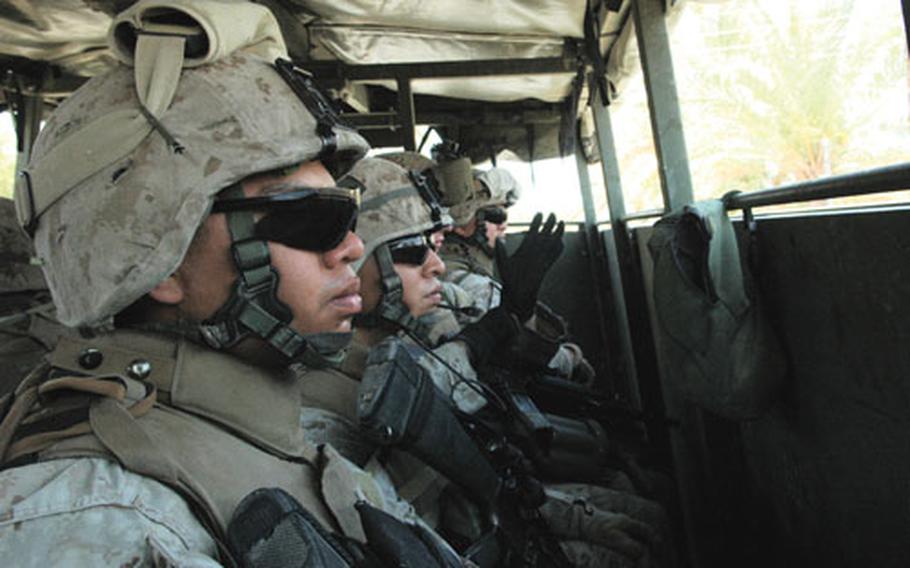 A truckload of Marines heads out into Haditha, where many locals remain angry about the alleged massacre of civilians by a previous Marine unit last fall. (Andrew Tilghman / S&S)

A truckload of Marines heads out into Haditha, where many locals remain angry about the alleged massacre of civilians by a previous Marine unit last fall. (Andrew Tilghman / S&S) 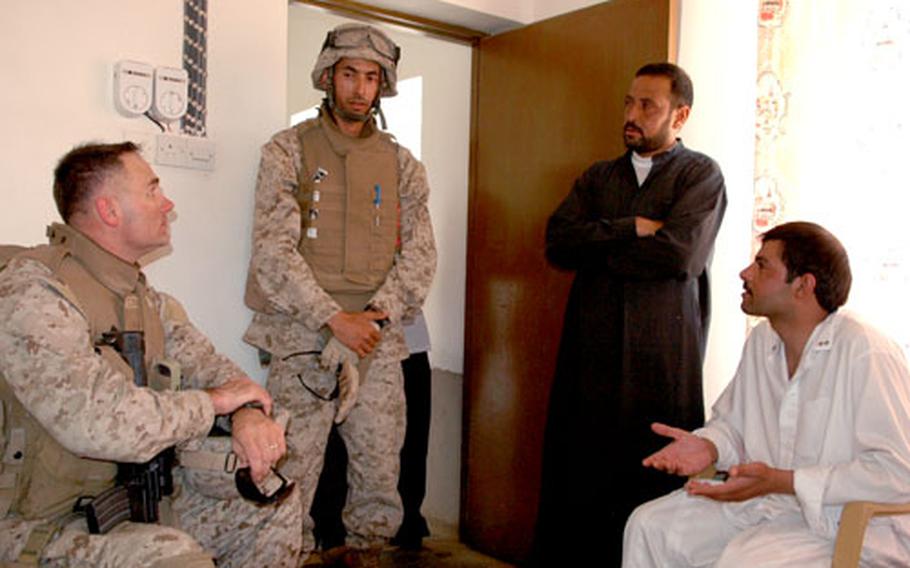 Lt. Col. Norman Cooling, left, meets with local men in Haditha, where he often reminds locals that his unit is not the one under investigation for killing civilians last year. (Andrew Tilghman / S&S)

HADITHA, Iraq &#8212; For many Americans, the name of this lawless insurgent stronghold nestled deep in the Euphrates Valley may soon evoke the same dark meanings once reserved for the prison at Abu Ghraib.

But in this dirty and dilapidated city, the memory of the Nov. 19, 2005, incident in which up to 24 Iraqi civilians were killed has loomed large for months, just one more unsettling reality in the recent history of this troubled city.

Locally, it strains relations between civic leaders and the Marines, and fuels the ongoing war between largely-Sunni insurgents and U.S. forces.

&#8220;Everyone knows about the incident. That is why people are scared of the Marines,&#8221; said Imad Jawad, mayor of Haditha, who often meets with U.S. Marines here to voice complaints from locals.

The incident and subsequent investigation have drawn the attention of the White House, Congress and top military officials in recent weeks. According to several published reports, military investigators found evidence to suggest several Marines may have intentionally killed innocent civilians and may face criminal charges.

The unit accused of the killings, the 3rd Battalion, 1st Marine Regiment, returned to Camp Pendleton, Calif., this spring, when a new group of U.S. Marines took over here. Today, the new battalion commander, Lt. Col. Norman Cooling, often tries to remind the locals that his Marines were not involved in the shooting that has drawn international attention.

Locals remain angry and suspicious. For example, when Cooling threatened locals with more severe security measures if they refuse to help the Marines in rooting out the local insurgency, one man stood up and flippantly asked whether the crackdown Cooling referred to would involve shootings similar to the Nov. 19 incident.

Cooling tries to handle this sort of remark diplomatically, and considers the comments a way for locals to play politics.

&#8220;They will use anything to try to get us to ease security measures,&#8221; Cooling said, acknowledging that the traffic checkpoints and house searches are disruptive for locals.

Relations between Marines and residents in Haditha are as tense as they have been since troops first arrived here in 2003 and began to face a determined insurgency that continues to attack Marines almost daily.

Haditha is similar to other cities along the Euphrates Valley, Cooling said, pointing to insurgent hotbeds like Fallujah and Ramadi and other cities that form the spine of the Sunni-led fight against U.S. forces.

Cooling said he does not believe that the alleged killings were part of a broader pattern of heavy-handed tactics on the part of the previous unit.

Nevertheless, Cooling does harbor some criticism for the 3-1. During a massive operation that swept though the city in the weeklong battle, the previous Marines destroyed several bridges across the Euphrates, severing economic lifelines that the residents continue to complain about frequently.

Now the bridges have to be entirely rebuilt, something that requires a long-term solution beyond the immediate reach of a battalion commander.

And as Cooling tries to cultivate support from the locals, he wishes the Marines had instead only blockaded the bridges, which would allow him to use the prospect of reopening them as a carrot-and-stick method of co-opting locals.

Nine Marines from Cooling&#8217;s battalion have been killed since the unit arrived in April, and many young troops head out every day to face split-second decisions that draw hindsight criticisms from locals.

Last week, a Marine shot a car approaching a convoy in the nearby city of Haqlaniyah, killing a respected tribal leader who had three wives. For days, local leaders asked the Marines for an explanation for what they said was the killing of an innocent man.

&#8220;The Marine was under the assumption that the vehicle was a suicide bomber,&#8221; Capt. Andrew Lynch told a group of local leaders. &#8220;We have a Marine in Haqlaniyah right now investigating the incident. We do not want to ever kill anyone who is innocent. If there is any wrongdoing by that Marine, we will correct it.&#8221;