Kids who misbehave at Ramstein could lose IDs on the spot 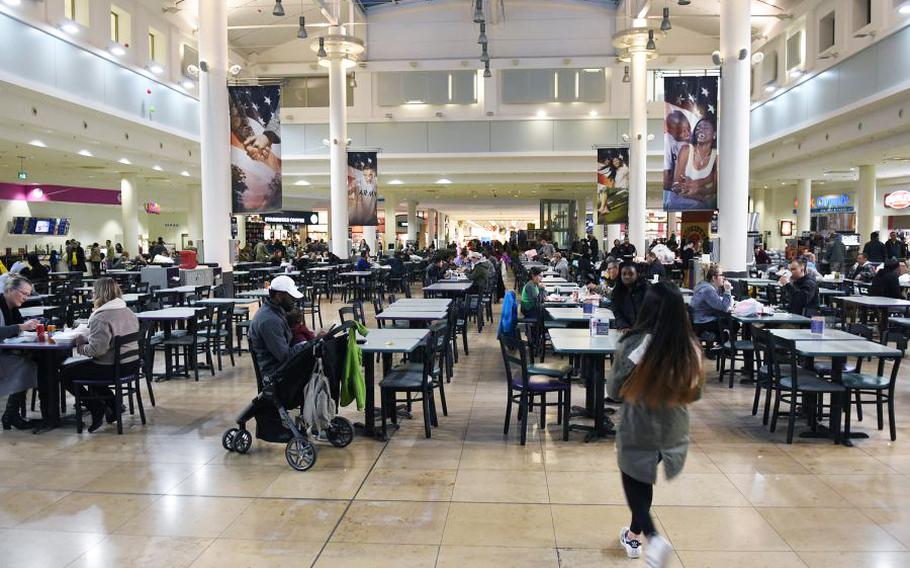 Buy Photo
The food court at the Kaiserslautern Military Community Center on Ramstein Air Base, Germany, Tuesday, Dec. 19, 2017. The KMCC is a popular hangout for kids after school. Some teens are causing trouble at the mall, prompting base officials to enforce the confiscation of dependent ID cards if Security Forces gets involved. (Jennifer H. Svan/Stars and Stripes)

KAISERSLAUTERN, Germany – Officials at Ramstein Air Base are cracking down on unsupervised kids who act recklessly at the base mall.

Starting Jan. 1, Security Forces will be authorized to confiscate dependent ID cards and call parents if military police are asked to assist with an incident at the Kaiserslautern Military Community Center involving youth misbehavior, base officials said.

The IDs will be returned, but whether the parents’ units are then notified or what further consequences may result will be determined on a case-by-case basis, said Lt. Col. Joel Harper, 86th Airlift Wing spokesman.

“This is no different than what would likely occur if similar instances were to happen at a mall off base or at a mall in the States,” Harper said.

The new policy is being enforced to address a string of what base officials characterize as destructive acts by unsupervised youth at the mall, including shopping cart races, the launching of soccer balls from the second floor, and damaging furniture.

“One of the biggest things is kids coming in with food and drinks into the furniture department and they kind of just lay all over the furniture and spill stuff,” said Sam Davis, KMCC Exchange store manager. “When we ask them to leave, they’re very rude. We hear some vulgar language, flip of the bird.”

Officials said there’s been no official tracking of incidents. But most tend to occur on Friday afternoon, when the mall turns into a popular hangout for middle and high school students after school, officials said.

“I’ve been here for 15 months, and it’s been going on before I got here,” Davis said.

In the past, Security Forces sometimes intervened, but IDs were not confiscated “as a matter of policy,” Harper said.

“The bottom line, this destructive behavior has to stop,” he said. “We need parents to become engaged and to take this seriously.”

Harper would not say whether there would be increased Security Forces’ foot patrols at the mall.

A few teenagers hanging out at the KMCC food court on Tuesday said they thought the policy sounded too strict, that kids should get a warning before losing their ID.

“Taking IDs, that’s a little too much,” said Miley Johnson, 16. “I can see if they were committing a crime.”

Johnson was with a group of high schoolers that blamed the misbehavior on middle schoolers and suggested kids were acting out from boredom, since there’s not much for teens to do on base. “Usually when high school kids come here, it’s to eat food or watch a movie,” said one teenage boy, who declined to give his name.

“They’re like, ‘I’m not going anywhere near that place on a Friday,’” Davis said. “I get it, that they don’t want to come.”

Commanders at Ramstein have been briefed in staff meetings about the tougher consequences for mall misbehavior, officials said, and some supervisors have informed their airmen via email.

A screen shot of an Nov. 21 email about the new policy — with a heading “HOT BX Tomfoolery HOT” — was posted on one of the KMC/Ramstein spouses’ group Facebook pages recently. A base official confirmed it was a message from the first sergeant of the communications squadron to subordinates.

Parents should talk to their kids about acceptable behavior at the mall, Harper said.

“Know who your kids are hanging out with, know what they’re doing at the mall,” he said. “No one wants to think that it is their child, but this behavior is happening, so please talk to your children about it.”