Kids prepare to bring play to life at Yokosuka school 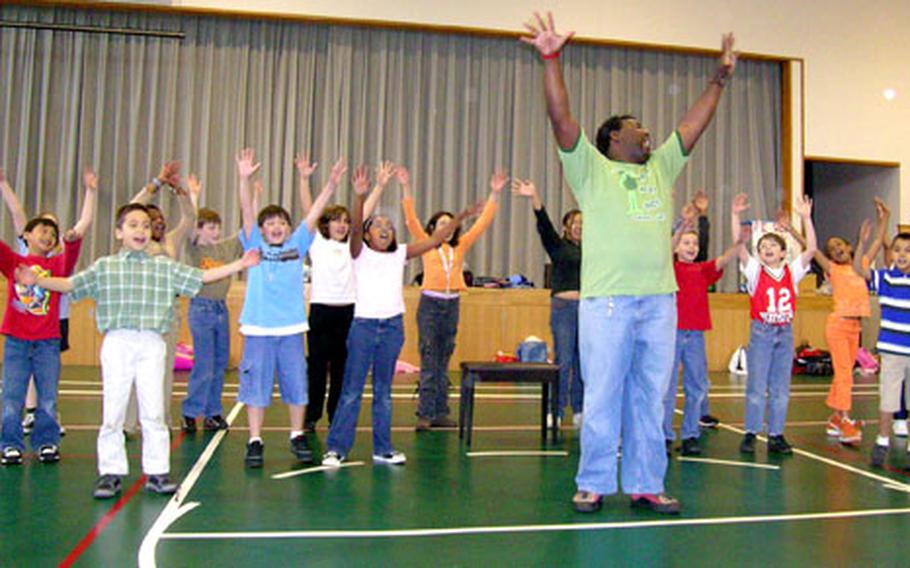 Tour actor/director DeAndre Smith, front right, is part of a two-person team that is taking Yokosuka’s The Sullivans Elementary School children from scratch to stage in a week. About 60 kids are rehearsing for two Saturday performances of “Beauty Lou and the Country Beast,” a Missoula Children’s Theater production. (Allison Batdorff / S&S)

There&#8217;s no time for stage fright: Opening night is just four days away. Auditions were yesterday. And the cast &#8212; 60 children from The Sullivans Elementary School &#8212; has lines, songs, dances and cues to memorize, plus lighting, sound and makeup to learn.

It&#8217;s all to come together before the curtain lifts Saturday on the sagebrush fairy tale of &#8220;Beauty Lou and the Country Beast.&#8221;

From scratch to stage in six days: That&#8217;s the MCT promise. The two-person team of Becker and DeAndre Smith have been making good on that promise for the past two months at military bases and foreign-language schools in South Korea and Japan.

The 30-year-old company visits 1,100 communities throughout the United States, Canada and overseas. In the States, MCT pulls up in a big red truck with all of the costumes, sets and scripts. Overseas has more logistical difficulties but the mission &#8212; to &#8220;develop life skills&#8221; such as creativity, communication and self-esteem &#8212; remains the same, Becker said.

Through the week, MCT works on commitment, responsibility and teamwork during the four-hour-a-day rehearsals. The company uses a group audition concept so the kids won&#8217;t be so &#8220;self-conscious&#8221; for their first try-out, Becker said, and employs plenty of tricks to aid memorization.

MCT hasn&#8217;t been here for the past five years, she said, and the funding to bring the group back almost was lost. The Japan District Superintendents Office reinstated the funding and the parent-teacher organization helped fund the workshops, she said.

Philip Yambrick, 11, indicated that would suit him. The whirlwind schedule is &#8220;fun,&#8221; he said, and he likes the memorization and singing the songs.

Performances are 3 p.m. and 7 p.m. Saturday in The Sullivans gym. All are welcome to attend. There is no admission and tickets can be procured through performers or by contacting Kelley-Burne.