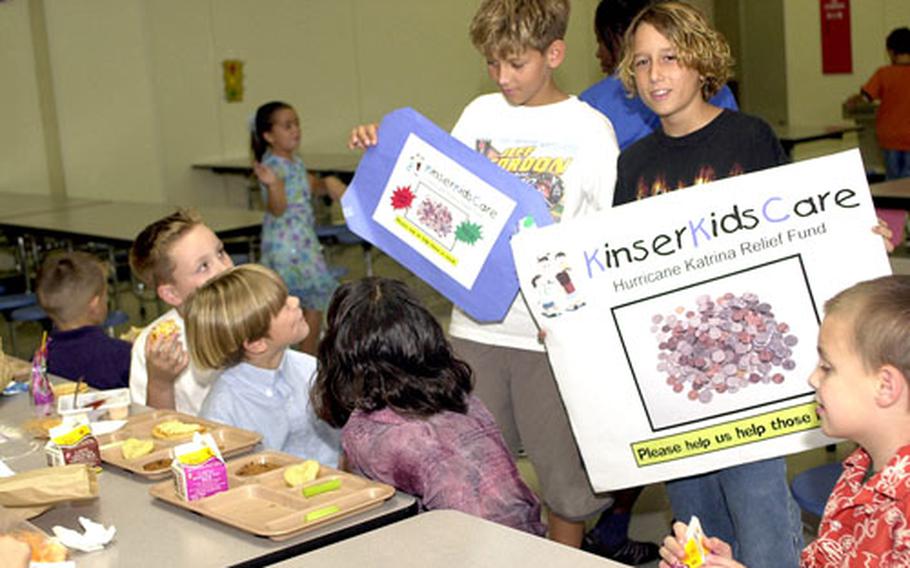 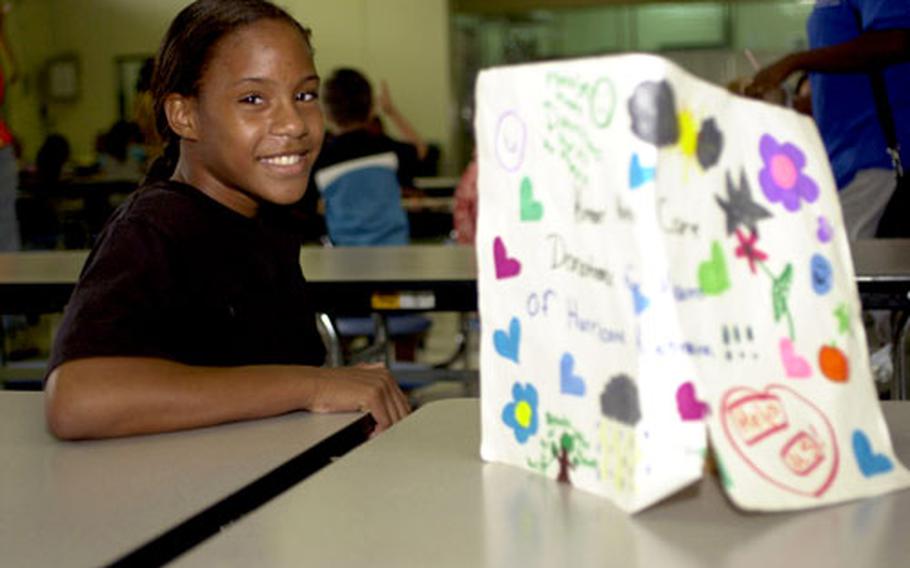 Kinser Elementary School sixth-grader Lynda Lovell sits at a table near the entrance of the school’s cafeteria Friday with a sign asking for donations for hurricane victims in the states. (Fred Zimmerman / S&S)

Students at the elementary school here have adopted the slogan to help raise money for victims of hurricanes Katrina and Rita.

Students have been patrolling the school cafeteria during lunch holding signs with the slogan, asking fellow students, faculty members and visiting adults for any change they can spare, according to Laura Stoller, a teacher at the school. Students also asked for donations during a recent school open house, hitting up many parents for cash. So far, Stoller said, the kids have raised more than $1,200 for the cause.

The student council collected &#8220;quite a bit of money&#8221; for victims of the Dec. 26 tsunami in southern Asia, she said. &#8220;So when Katrina hit, the staff wanted to do something [and] asked student council members from last year if they wanted to do the same thing.&#8221;

To show younger students how they can help, older students went to their classrooms and explained what it means to give and the importance of lending a hand to those in need.

Even on days when business was slow, she said, the kids still were excited.

&#8220;Generous&#8221; staff member donations also helped with collections, Stoller said, adding that she also was impressed at how students would organize fundraisers away from school.

Fifth-grader Megan McHale was one of those students. She held a &#8220;slushy&#8221; sale on two Saturdays and was planning a third this past weekend. Her first two sale dates netted about $50.

Megan said the sales were kid-driven, as she had the help of several friends. Their best seller: a strawberry-grape mix.

Students won&#8217;t be asking for donations in the cafeteria anymore, but donations still will be accepted in the office until Friday, Stoller said.

The money will go to the Parent/Teacher Association, which will send a check. Stoller said the school has information about several hurricane-affected schools in Mississippi and Louisiana where the money may go, or it may be donated to the American Red Cross.