Amanda Kappler, 5, looks up at her brother, Dane Kappler, 2, peering from inside a C-21 Lear Jet, Monday at Ramstein Air Base. (Lisa Horn / S&S)

Amanda Kappler, 5, looks up at her brother, Dane Kappler, 2, peering from inside a C-21 Lear Jet, Monday at Ramstein Air Base. (Lisa Horn / S&S) 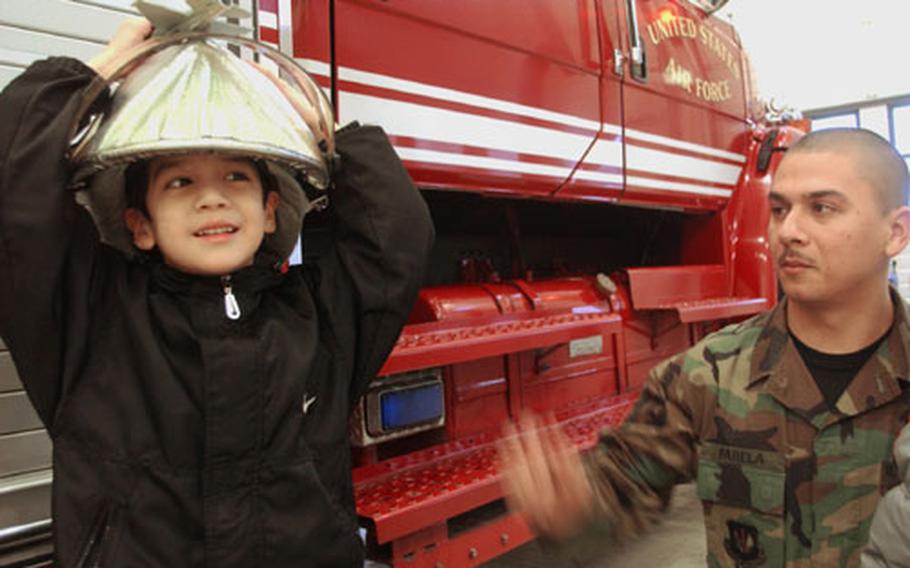 Servicemembers all Europe saw their shadows Monday and they weren&#8217;t scared.

Department of Defense Dependents Schools students got a taste of the daily grind during the seventh annual Groundhog Job Shadow Day, learning how their parents and neighbors stay occupied from 9 to 5.

This year&#8217;s program is expected to bring more than 1 million young people and 100,000 businesses together nationwide. In Europe, some schools looked more like ghost towns, since students left school desks and playgrounds for office meetings and computers.

At Rhein-Main Air Base, Germany, more than one-third of students shadowed their parents and others throughout the workday. The fire station, legal office, post office, and even a C-17 aircraft unit, opened their doors to offer a firsthand look at different military occupations.

&#8220;When mom and dad come home a little tired, children will know their parents are not just sitting in an office and sipping coffee all day. They&#8217;ll know they&#8217;re moving and getting missions done,&#8221; she said.

All work isn&#8217;t done away from home, though. Esmeralda Fabela, a homemaker, said she was going to show her husband and children what it takes to keep their house running.

After a tour of Staff Sgt. Armando Fabela&#8217;s fire station at Rhein- Main, the couple and their two boys, Oscar, 5, and Aaron, 2, would learn the art of making meals and doing chores.

&#8220;This is so good that the school lets the children participate in this program and see what their parents do all day,&#8221; Esmeralda Fabela said.

In addition to a tour of the control tower, students at Ramstein saw military working dog demonstrations, climbed into the cockpits of a C-21 and C-130 and walked through the Ramstein comptroller&#8217;s vault.