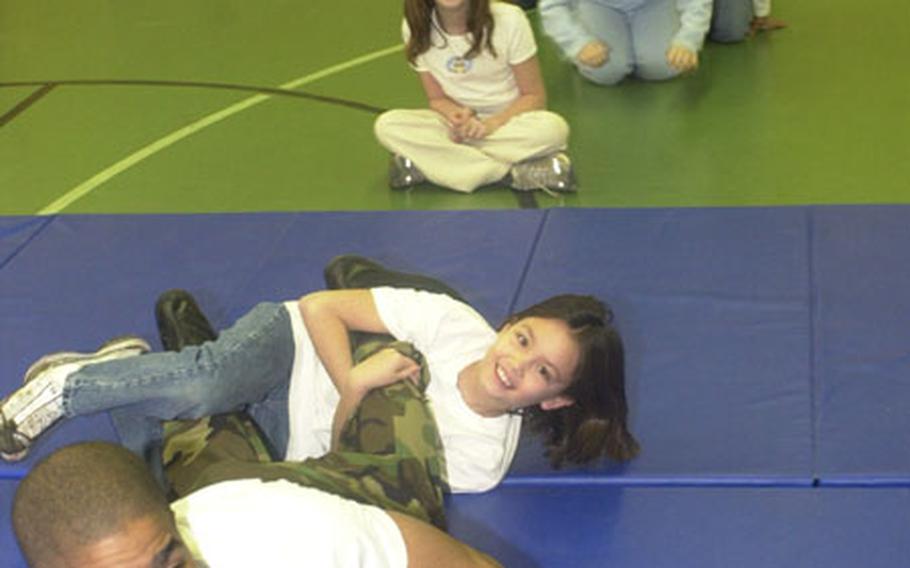 "The bigger they are ...." That&#39;s sort of the concept behind Kidscape abduction prevention techniques that students at Smith Elementary learned this week. Volunteer instructor Pfc. Aaron Graham laughed after third-grader Brook Lee Matanane foiled his "kidnapping" attempt by latching on to the big soldier&#39;s legs until he toppled. (Terry Boyd / S&S)

BAUMHOLDER, Germany &#8212; Sgt. David Rodriguez is confident he knows how to stop a child abductor.

In the five or 10 seconds it takes to grab a child, the kidnapper is counting on the victim going along quietly, he says.

So that&#8217;s why Rodriguez, Spec. Martin Mendoza and Pfc. Aaron Graham are showing kids how to become an abductor&#8217;s worst nightmare &#8212; a screaming, grappling anchor around his feet.

Though he&#8217;s screaming at the top of his lungs, Alberto remains calm, composed and focused. Methodically, the boy presses his face into Rodriguez&#8217;s chest, distracting him as his hands sneak toward his would-be captor&#8217;s eyes.

&#8220;Ahhhhh!&#8221; Rodriguez screams in real pain as Alberto &#8212; part of Rodriguez&#8217;s demonstration team &#8212; gets a bit carried away in front of an enraptured class of Smith Elementary School third-graders. Freed, the boy sprints away, but never takes his eyes off Rodriguez.

Gripping and shouting startles the assailant. Dipping down to his legs slows him down and breaks his control. Spinning to grip both legs throws him off balance and makes him panic.

Rodriguez and his wife, A. Chile Rodriguez, bring Tae Kwon Do backgrounds to their Kidscape teachings.

Reading about &#8220;all the craziness in the world &#8212; all the abductions in the States&#8221; led her and her husband to try out Kidescape on their martial-arts classes, Chile Rodriguez said.

While most children are abducted by someone they know, the most notorious cases are when strangers abduct children. In 2001, there were 2,240 child abductions in California alone, 2,183 were by parents or other family members, according to California Department of Justice statistics. The remaining 57 were by strangers.

The couple quickly became convinced that the technique works. They recruited martial-arts students Mendoza and Graham to help take the program on the road with command&#8217;s blessing.

Their first stop was Baumholder, with demonstrations all this week.

During his presentation, Rodriguez instantly gains and holds the attention of a gymnasium full of fidgety children. He does it by giving it to them straight.

And real fun. Once the children learn the basic moves, the kids delight in hobbling the hulking soldiers.

All three men are noticeably slower getting up after a 100 falls on thick, blue gym mats. The kids can&#8217;t get enough.