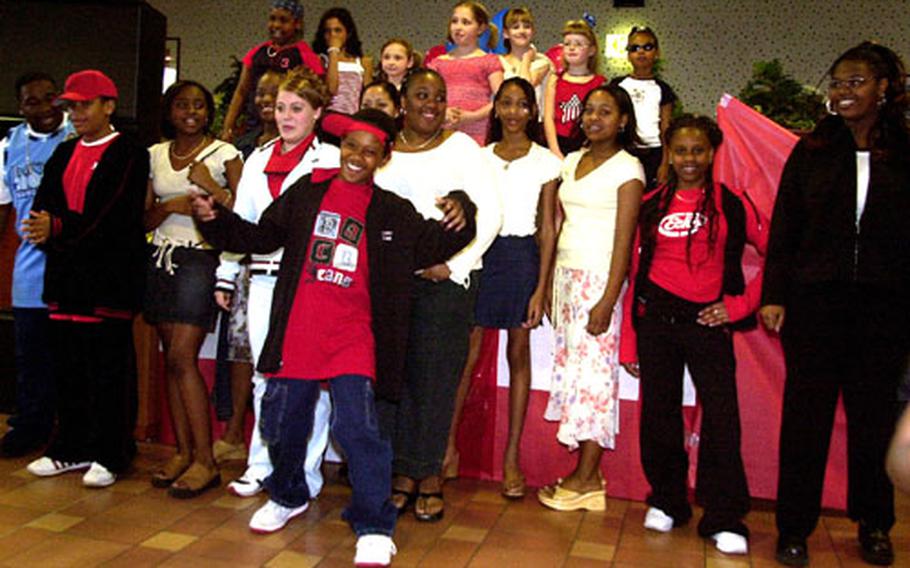 The models accept their round of applause following the Youth Services and AAFES Spring Fashion Show at the Cambrai Fritsch dining facility in Darmstadt, Germany on Friday. Nineteen kids and one dad modeled spring fashions sold by the Army and Air Force Exchange Service to honor April&#39;s Month of the Military Child. (Michael Abrams / S&S)

These children had moves that would make some elite models jealous.

With hands planted on their hips, they sashayed down the catwalk in the latest Army and Air Force Exchange Services clothing during a fashion show at Cambrai Gardens Dining Facility in Darmstadt, Germany.

The gala kicked off the Month of the Military Child celebrations in hopes of relieving some deployment stress children are facing right now, as well as allowing their confidence to grow.

Just prior to the show many children&#39;s hearts raced and palms turned clammy.

&#8220;I&#8217;m kind of scared,&#8221; Milo Hendricks, 11, of Darmstadt said just before he faced the full dining facility. No one would have guessed it, though, as Milo, donned in a sun visor flipped upside down and tilted to the side, slung a coat over his shoulder with a confident smile. As the only male student participating in the fashion show, he said he had to &#8220;represent.&#8221;

Hendricks&#8217; sister, Kimberly Reenee, 14, said this opportunity was just what she was waiting for and would help her in the future.

&#8220;I love modeling. I like the all the attention. This is something I definitely want to do later in life,&#8221; she said. She wore an ankle-length jean jacket and flower-printed sundress.

Others were not so sure, like Tiandra Singleton, 12, of Darmstadt, who described herself as &#8220;scared, but nervous,&#8221; just before the show.

When it was all said and done, though, the children gathered in a backstage area and agreed it was a good time.

&#8220;This is a nice thing to do during the Month of the Military Child. Having a month just for us is good because children go through a lot of stuff with parents always gone. It gives us time to relax and have fun,&#8221; April Slappy, 12, from Langen, said.

The Wiesbaden Post Exchange provided the clothes for the fashion show.

U.S. Army Europe communities will continue to celebrate the Month of the Military Child throughout April. Call your local Child and Youth Development Services for details.