Kids in Germany happy with storm's bottom line: No school 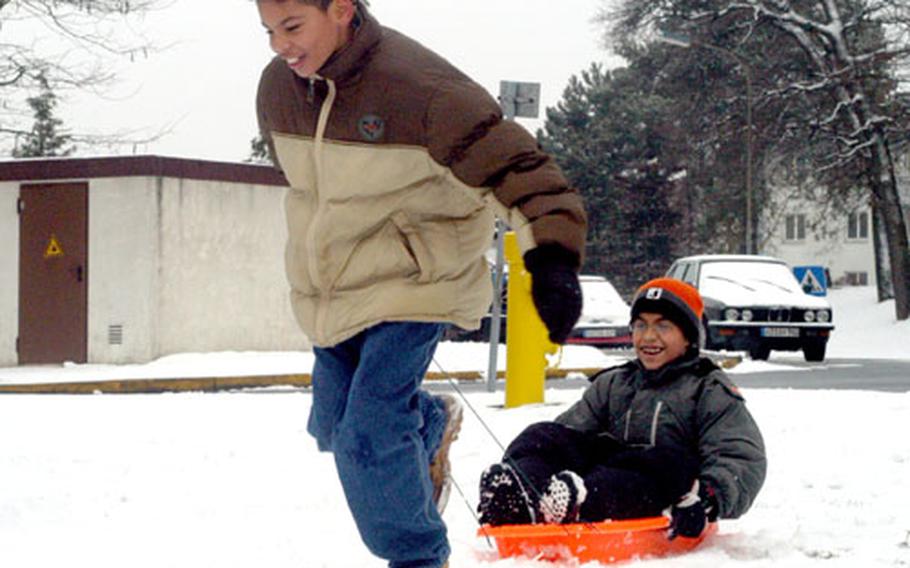 Morning snow came down so hard in Darmstadt that Lt. Col. L.J. Strife, commander of the 233rd Base Support Battalion, called children out of school early to ensure they arrived home safely. The sun peeked out in the afternoon, allowing youngsters ample time to enjoy the snow.

No Air Mobility Command flights were canceled because of weather, according to Air Force officials.

Tech. Sgt. Raul Mananquil, Central Europe noncommissioned officer in charge of the Operational Weather Squadron in Sembach, Germany, said the heaviest snow was expected to fall Wednesday night in Germany and in the Benelux region. He said snowfall should average 2 inches from Spangdahlem to Grafenw&#246;hr.

More snow will continue through the rest of the week in Germany and change into rain showers by Sunday.

Mananquil suggested that snow-sport buffs take to the mountains over the weekend, since he expects snow to begin melting in early February.

In northern Italy, the little snow on the ground had already melted by midday Wednesday.

Aviano Air Base and Caserma Ederle in Vicenza saw their first real snowfalls of the year this week, the mountains near each base are covered in white.

Camp Darby, on the northwest coast of Italy, is still waiting for its first snow of the season. The camp may be waiting a long time, according to Staff Sgt. Michael Torres of the Mediterranean section at the Operational Weather Squadron.

Torres said it will generally be warmer in the coming weeks across Italy. He expects no more snow, but does expect rain.

Snow should continue in the Balkans for several days and then move into rain showers as well, Torres said.

Kent Harris contributed to this report.