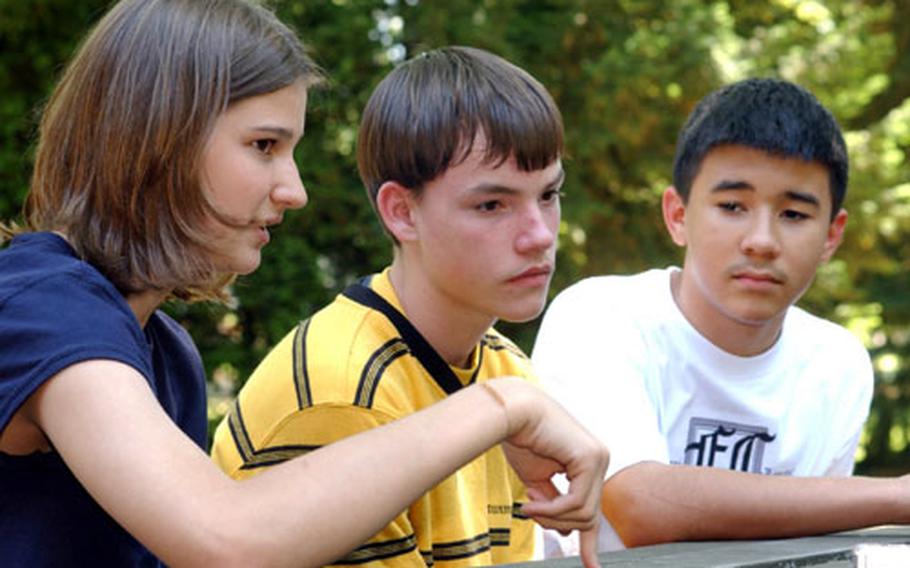 From left, 14-year-olds Rachel Kodalen, Kris Higgins and Grant James discuss the effects of their fathers being deployed to Iraq during a round-table discussion with Stars and Stripes and counselor Frankie Nielsen at Wiesbaden Middle School last week. (Raymond T. Conway / S&S)

WIESBADEN, Germany &#8212; In the office Frankie Nielsen occupies is an old, comfy couch.

Now mostly covered with colorful quilts, the sofa remains a safe refuge for school kids with issues to sort out.

&#8220;A lot of stories have been told on that couch,&#8221; said Nielsen, a counselor at Wiesbaden American Middle School.

This year, the story count went way up, especially after 1st Armored Division troops had their yearlong tours to Iraq extended by up to 120 days. Many deployed troops &#8212; including parents of Department of Defense schools students &#8212; are home now, and most safely survived. The impact of casualties on students&#8217; families is not known because the system does not track them in any coordinated way, according to a school spokesman.

Still, for Nielsen, a counselor since Lyndon Baines Johnson was president, the just-completed school year was the toughest to date. Many of the kids felt the strain, too, she said.

So a few days ago, the veteran counselor brought together five eighth-graders to discuss their views and feelings about how their school year went.

The group of 14-year-olds consisted of Tonia Boies, Cassie Gonzales, Kris Higgins, Grant James and Rachel Kodalen. The two-hour talk occurred outside, around a picnic table shaded by a few trees.

Cassie and Rachel dominated the discussion. Tonia contributed, too, but it was clear something else weighed heavily on her mind. Grant, new to the school this year, picked his spots and spoke well. Kris, now the fix-it-man in the house, is the only one of the five whose dad is still serving in Iraq.

From the beginning of the school year, the five said they noticed a divide developing between those students who had a parent deployed and those who didn&#8217;t. Generally speaking, the latter group seemed to be more cheerful day-in and day-out, though there were exceptions.

Though they stuck together, feelings of isolation and vulnerability were never far away, especially when news reports aired of another attack against U.S. forces in Iraq.

When Kris became the first of the five to speak glowingly of his mother and all that she has had to endure, the others shouted in agreement. One after another recounted the sacrifices his or her mom made during the year.

Understandably, much of the discussion centered on the fathers. Rachel, Grant, Tonia and Cassie are happy and relieved to have their dads back with them under the same roof, but acknowledge there have been reunion pains.

Grant said his dad seems more stressed than normal. He doesn&#8217;t play ball as much as he used to, and other pastimes don&#8217;t seem as important anymore. And he&#8217;s taken an unexpected interest in gospel music, which had Grant shaking his head in disbelief.

Nielsen, the counselor, said kids undergo many changes in their personal makeup at this age. The war, separations and reunions, she noted, have disrupted an already unpredictable developmental stage.

Cassie, for example, said she recently grabbed her father&#8217;s hand as the two of them strolled through the post exchange. Her father didn&#8217;t know what to make of it. Cassie admitted she&#8217;s gone from not wanting to be seen with her parents, particularly when her friends are around, to public displays of affection.

He also realized &#8212; and has made sure his kids know &#8212; how lucky they are to have the lives they do. That sense of appreciation seems to have rubbed off on all of students seated around the picnic table.

Grant and the others, especially Rachel, said they would prefer not to dwell on the fact that their fathers might have to return to Iraq some day.