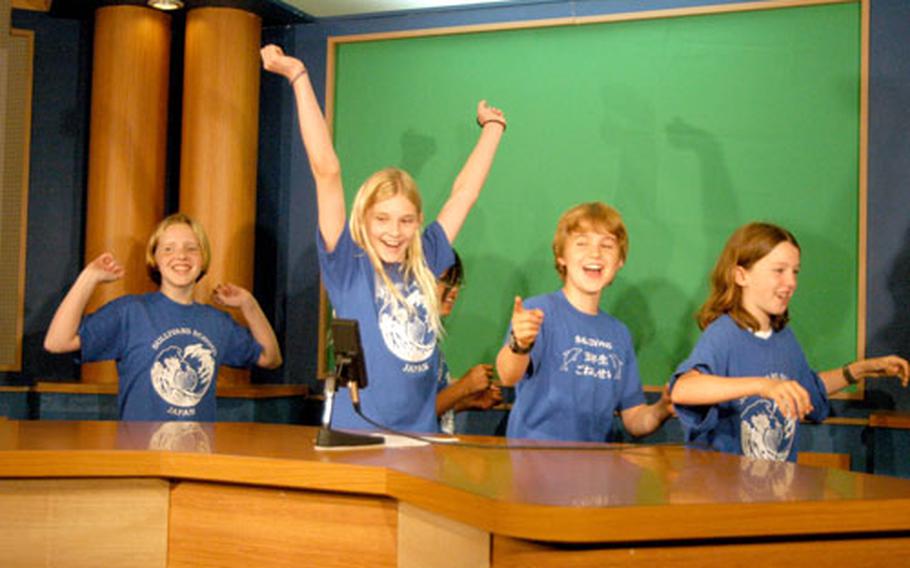 YOKOSUKA NAVAL BASE, Japan &#8212; It was a takeover, but it was hardly hostile. The Sullivans School students had simply heard enough about the wonders of drywall.

The coup was all in fun &#8212; a planned rebellion to give 15 students a chance to hone their broadcasting skills in a high-tech working studio.

The kids are old hands in front of and behind the camera; they shoot their own 10-minute show every morning called &#8220;Sullivans School News,&#8221; or SSN. The show has been running since Information Specialist Barbara Bowman started it four years ago.

&#8220;We have different students say the Pledge of Allegiance, perform patriotic songs and do announcements about the school and clubs. Students also interview special guests who come to visit us,&#8221; Bowman said.

The Sullivans Network Crew brought a slew of questions with them Friday, ranging from &#8220;What do you do when the president of the United States comes to visit?&#8221; to &#8220;What happens when you make a mistake on camera?&#8221;

The students learned about green-screen technology, how to tell the difference between a unidirectional and omnidirectional microphone and cracked the code of &#8220;OTS,&#8221; the over-the-shoulder shot.

Even so, reading the news at a normal pace while not squinting at the teleprompter or perspiring under the bright lights is harder than it looks, said 11-year-old Dominique Jordan.