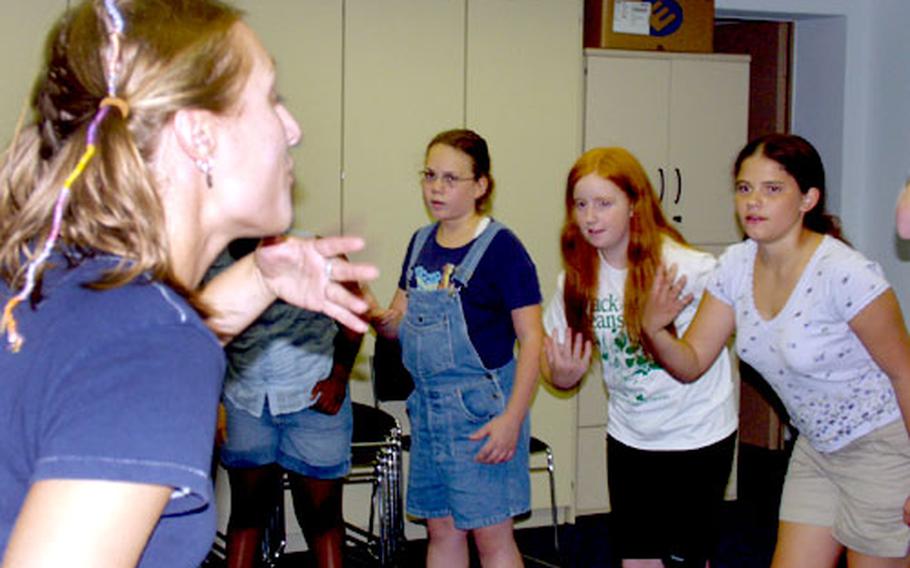 Children from the 233rd Base Support Battalion began auditions for the Missoula Children&#8217;s Theatre production of &#8220;Cinderella&#8221; on Monday, and the curtain will rise on a final production in Darmstadt on Saturday.

She and co-worker Leigh Lingnofski, 22, of Appleton, Wis., are giving military children throughout Germany crash courses in acting.

The two arrive in a new town every Sunday, hold auditions on Monday, and by that Saturday children are acting like stars.

They believe the magic is in what the children learn on the stage.

&#8220;This is a good way to teach children how to express themselves and it helps their self-esteem,&#8221; Lingnofski said.

Woodruff said Missoula&#8217;s motto is helping children reach a new stage and already children are getting a feel for it.

&#8220;Even though this is my first time playing a main star in a play, I think everything will be just fine,&#8221; said Alayah Letson, 11, who will be Cinderella. She is a veteran of the stage having already performed in 10 other plays.

Missoula Children&#8217;s Theatre, based in Missoula, Montana, was founded nearly 30 years ago to introduce children to performing arts, according to the organization&#8217;s Web site.

About 50,000 children in 800 locations will be on stage in a full-scale musical, complete with set, makeup, costumes, props, lights and sound during this year &#8212; including those who participated in an earlier trip to Europe by the theater company during the school year.

The military communities just have to supply the stage and 50 to 60 enthusiastic children for one week.

Then the Missoula team must help keep that enthusiasm alive when the group of young actors complain of exhaustion and hunger while marching across the middle school stage for the umpteenth time. There&#8217;s no time to rest though, because the show must go on.

The Darmstadt show will be held in the middle school gym at 3 and 7 p.m. on Saturday.