Kids at DMZ school get English help from soldiers 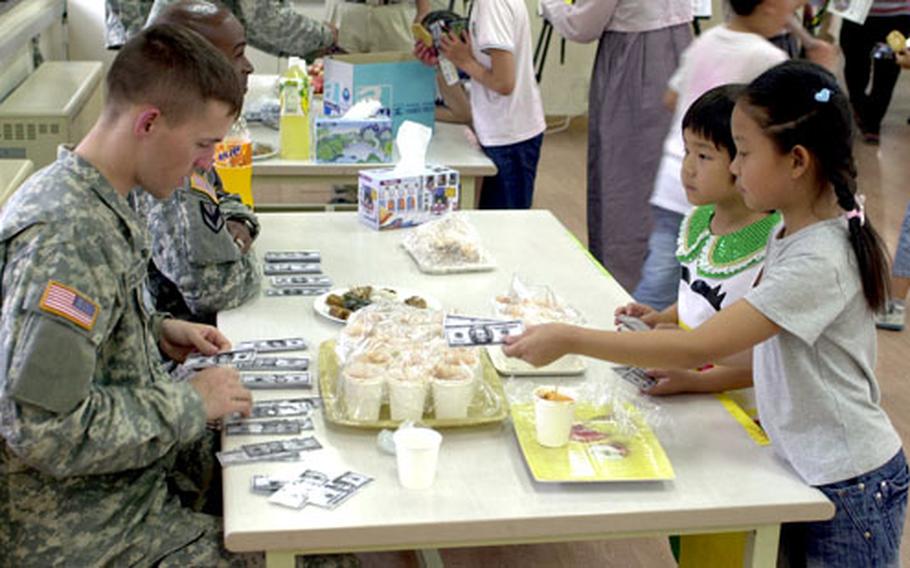 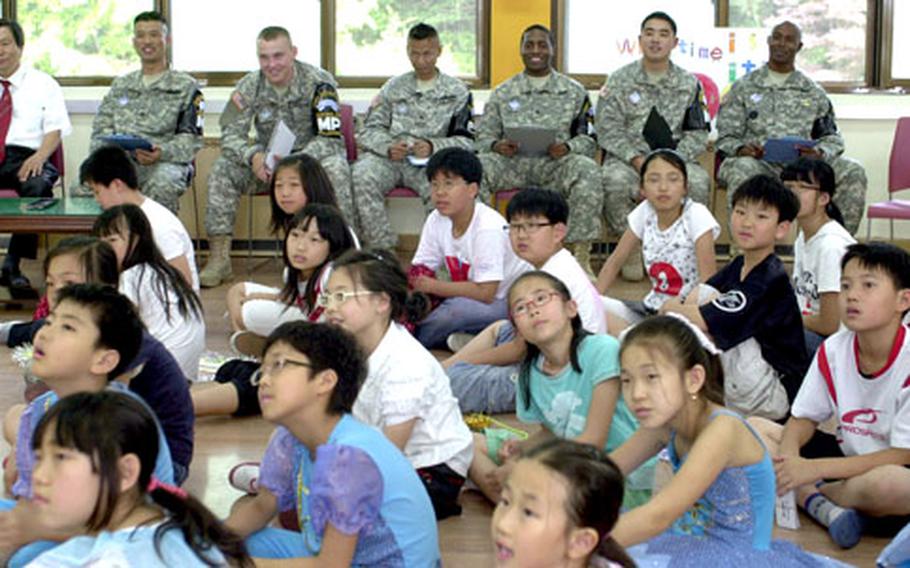 Students at Daesungdong Elementary School in the DMZ, along with U.S. soldiers who serve as English teachers there, gather at a schoolwide assembly Friday. (Jon Rabiroff / S&S) 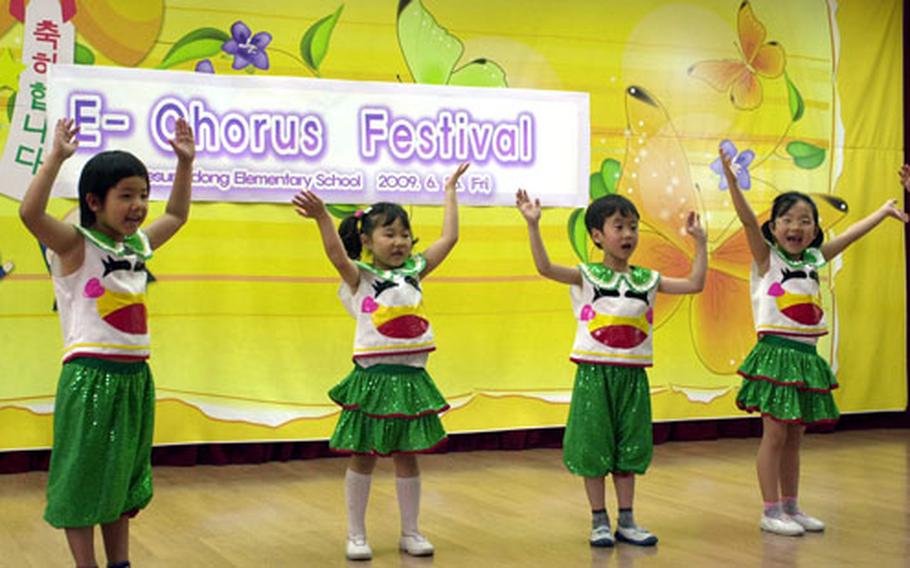 Students at Daesungdong Elementary School in the DMZ perform a musical number in English during Friday&#39;s assembly. (Jon Rabiroff / S&S) 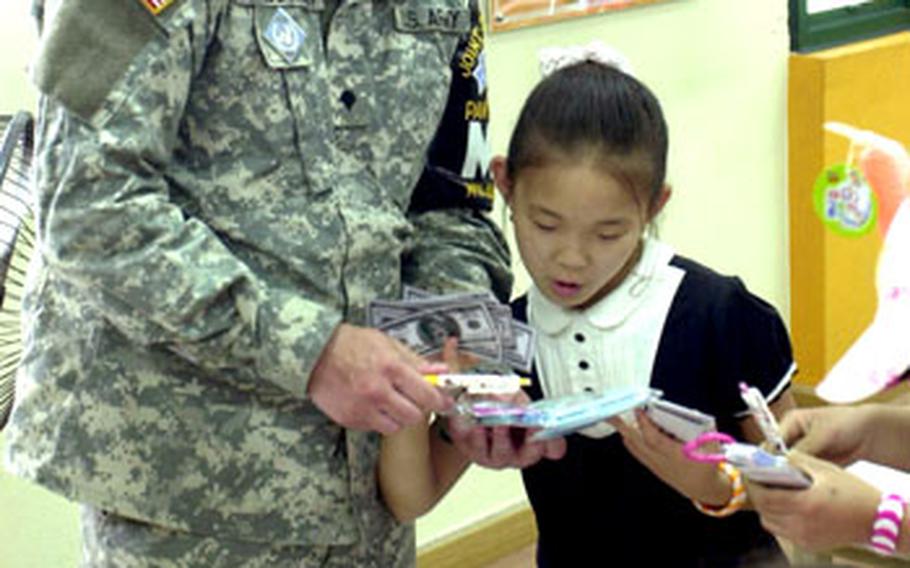 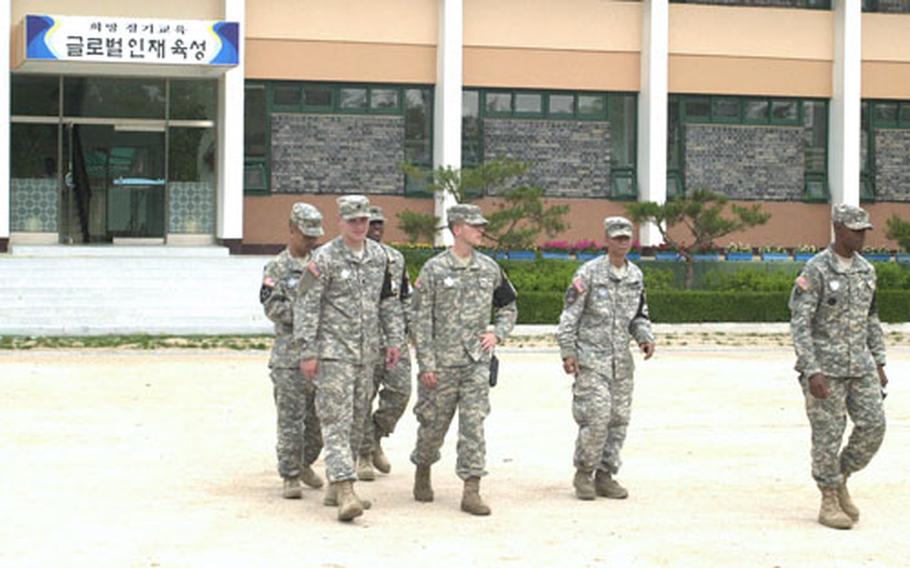 U.S. soldiers leave the Daesungdong Elementary School in the DMZ Friday after participating in the assembly and "English market." (Jon Rabiroff / S&S)

DEMILITARIZED ZONE, Korea &#8212; Fifth-grader Peter Kim boards a bus most mornings that takes him through a series of gates manned by armed soldiers to a school less than a mile from the North Korea border.

"My parents wanted me to go here because it is a good place to learn English, and we can study hard in this place," the boy said.

He attends Daesungdong Elementary School, which lies amid the heavily armed DMZ and is visited twice a week by English-teaching U.S. soldiers.

What his family, friends and school officials apparently don&#8217;t think much about is any threat that might be posed by the political posturing of North Korea, which has warned of military action against South Korea and the United States repeatedly in recent weeks.

"I think the North Korean people are very poor and very angry," Peter said, adding that he and his classmates have little or no interest in what is going on just to the north of their school.

U.S. Army Spc. Jacob Wilderman, who has been teaching at the school for several months, said that if the children of Daesungdong are at all concerned about North Korea, they don&#8217;t show it. "They are just like any other kids," he said. "They focus on kid things."

Last month, the 30 students of the DMZ held an assembly during which small groups danced and sang along in English to songs like The Beatles&#8217; "I Want to Hold Your Hand" and The Carpenters&#8217; "Top of the World."

After the presentation, U.S. soldiers manned tables for an "English market," during which students used play American money they had earned through their schoolwork to buy toys and food.

Were it not for the continuing participation of the U.S. military, the school likely would be shuttered.

It used to draw students only from the village of Daesungdong, a product of the armistice signed in 1953 that put a halt to Korean War hostilities. The pact created the DMZ, and allowed for one village inside its boundaries on both sides of the demarcation line.

While North Korea&#8217;s DMZ village, Gijong-dong, remains uninhabited, Daesungdong has nearly 200 residents, who are either direct descendants of the original villagers or women who have married into the village.

Unless granted a special waiver, they must spend at least 240 nights per year in the village to maintain residency. That allows the residents to farm about 10 times more land than the average Korean farmer, earn about $82,000 a year and pay no taxes.

They are governed by the United Nations Command, must be escorted out to the fields by UNC Joint Security Area soldiers and are locked into their homes by 11 p.m. every night.

Principal Kim Doek-won explained, through an interpreter, that in 2006 the school had only nine students and was in danger of closing. Permission was given to draw students from outside the village, but Daesungdong Elementary officials still had to give parents a reason to send their children into the DMZ every day.

Enter the U.S. military, and an agreement that brings eight soldiers to the school on Wednesdays and Fridays to teach English.

Today, only five of the school&#8217;s 30 students are residents of Daesungdong, the principal said.

"In the classroom, we teach English according to textbooks," she explained. "But, the American Army soldiers, they speak ordinary English."

Army 1st Lt. Dane Schoonover said he volunteered to be a teacher because he saw it "as a great opportunity" to interact with the villagers and children.

He said the students are like those in any U.S. classroom.

"The one difference is that they are speaking a [second] language," Schoonover said. "It&#8217;s uncommon for children at that age in the U.S. to do that."

Principal Kim said he hopes Daesungdong Elementary remains open for years to come as a "symbol of unity."

"The students who live here and the students from outside, they know very well that the school is situated within the DMZ," he said. "But they don&#8217;t have any feelings of fear."